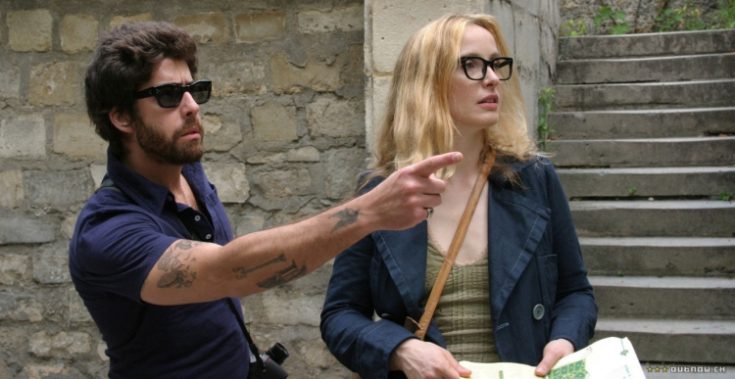 Parisian Marion (Julie Delpy) and her American boyfriend Jack (Adam Goldberg) have to stop off for a couple of days to visit her parents in Paris, on their way home to New York from a holiday in Europe.

As Marion catches up with her parents, her sister and friends from her past, an oblivious Jack tags along, feeling increasingly left out, smiling politely as people speak French around him.

The one “friend” who, on the surface, appears to be polite enough to speak to Jack in English, does so only to try to make him jealous of his own past with Marion.

This breeds insecurity which puts almost insurmountable pressure on their relationship.

What effect will two days in Paris have on their heated but loving relationship?

It’s hard to make a film set in Paris that isn’t beautiful, but then most films set in Paris are made by outsiders, for whom it’s a fairytale city, or residents who want to boast about their home city.

Here, ex-pat Frenchwoman Julie Delpy presents the more gritty, everyday side of Paris, seeing none of the sites she visited with her previous American co-star in the city, Ethan Hawke, in Before Sunset.

In that film, we were treated to mellifluous, almost poetic dialogue, but this time, as with the locations, the romance is replaced by a tetchy relationship, characterised by staccato dialogue, peppered with angry and cantankerous one-liners, laced with uncomfortable frustration.

It’s to the credit of the two lead actors that despite their petty bickering, bitter teasing their general attitudes, they both remain oddly appealing.

From his insecurities to her complacency, the couple seem very natural.

For someone as miserable as Jack, he comes across as being strangely sympathetic, not least because of the alienation he feels when everyone else mocks him, while he smiles and nods in blissful ignorance.

Delpy is highly experienced in front of the camera, less so behind it – and while her use of voiceover and freeze-frames make interesting viewing, she overuses flashbacks and fails to take advantage of cinematic opportunities she’s given herself – she makes her character a visually impaired photographer, but we see nothing through her eyes.

The progress of the relationship isn’t entirely convincing either: at the start of their eponymous two days in Paris, they seem to be deeply in love, but a couple of fairly insignificant encounters send their relationship to the brink, and Marion fails to act to calm Jack’s insecurities. But then, suddenly and inexplicably, everything’s OK again.

For a film which, up until that point, had been strong on dialogue, it chickens out at the last minute, giving rise to an unnaturally neat and unsatisfying emotional denouement to the film.

There are definitely some nice touches throughout the film, as Delpy tries to do for her home city what Woody Allen once did for his. But despite likeable protagonists and a witty script, Delpy fails to pack enough of an emotional punch and leaves you with little to take with you at the end of the film.