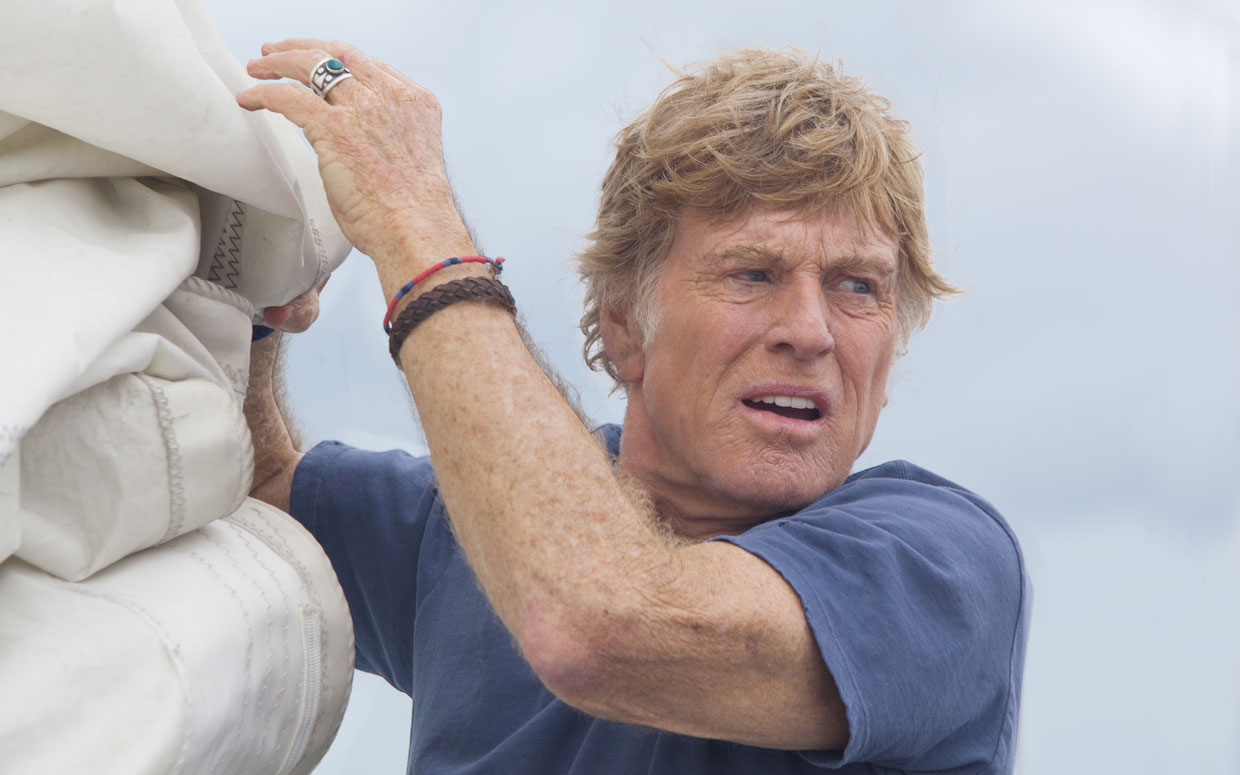 An aging sailor (Robert Redford) is on a solo voyage across the Indian Ocean. In the middle of nowhere, he wakes up to find water leaking into his yacht.

When he climbs out on deck, he realises that his hull has been holed by a shipping container that’s fallen off a cargo ship.

Doing his best with what he can find, he tries to repair the hole, but before long, heavy storms ensure that this is only the start of his problems.

It soon becomes clear that the yacht is going in only one direction — and that’s down.

With his emergency radio out of action, the mariner finds himself floating helplessly in his dinghy, with only a sextant and his nautical maps to guide him and a dwindling supply of food and fresh water.

Can he survive long enough to attract the attention of a passing ship or will the elements ensure that all his resilience was for nothing?

With high concept action films getting ever more complex, it’s particularly welcome that not one but two of the most powerful and effective thrillers of the year have been so simple; All Is Lost delivers “solo yachtsman tries to survive in the middle of the Indian Ocean” just weeks after Gravity gave us “solo astronaut tries to survive in space.”

While Gravity was undeniably spectacular, stunning and thrilling, by virtue of its being set in space, it was a step removed from the kind of reality that most viewers can understand. But All Is Lost is set on earth. We’ve all been to the seaside. Many of us have been on boats, making it much easier for earthbound audiences to identify with Robert Redford’s plight.

And while the protagonist of the former is Sandra Bullock’s fit young (ish) woman, this time, a man in his mid-seventies is put through his paces.

Redford’s performance is outstanding as this elderly man carries the 106 minute film, the only living creature on screen, but for a handful of sharks. His every thought is painted across the screen, written in his wrinkles. It’s an astonishing turn, with a roller-coaster of emotions imparted using no more than his eyes.

The twists and turns of the plot could feel a little contrived – is he going to get over this hurdle, yup, but here comes another one, and so on – but it always feels believable.

The narrative and cinematic simplicity of JC Chandor’s script and direction, along with the odd burst of stunning visual imagery, combine to give us to one of the biggest small films for years.

One director. One actor. One yacht. One ocean. It’s a compelling and continually gripping piece of honest, good old-fashioned film-making, with an skilful actor imparting a simple story with immense clarity.

Perhaps the film’s only failing is its ambiguous ending. It feels right that a film that makes you think shouldn’t have an obvious conclusion, but when Chandor himself says the denouement is up to the audience, that doesn’t feel right; it’s fair enough to expect viewers to reach their own conclusion, but the auteur should have an answer.

A film that turned heads in Cannes is rightfully garnering attention as awards season kicks off.