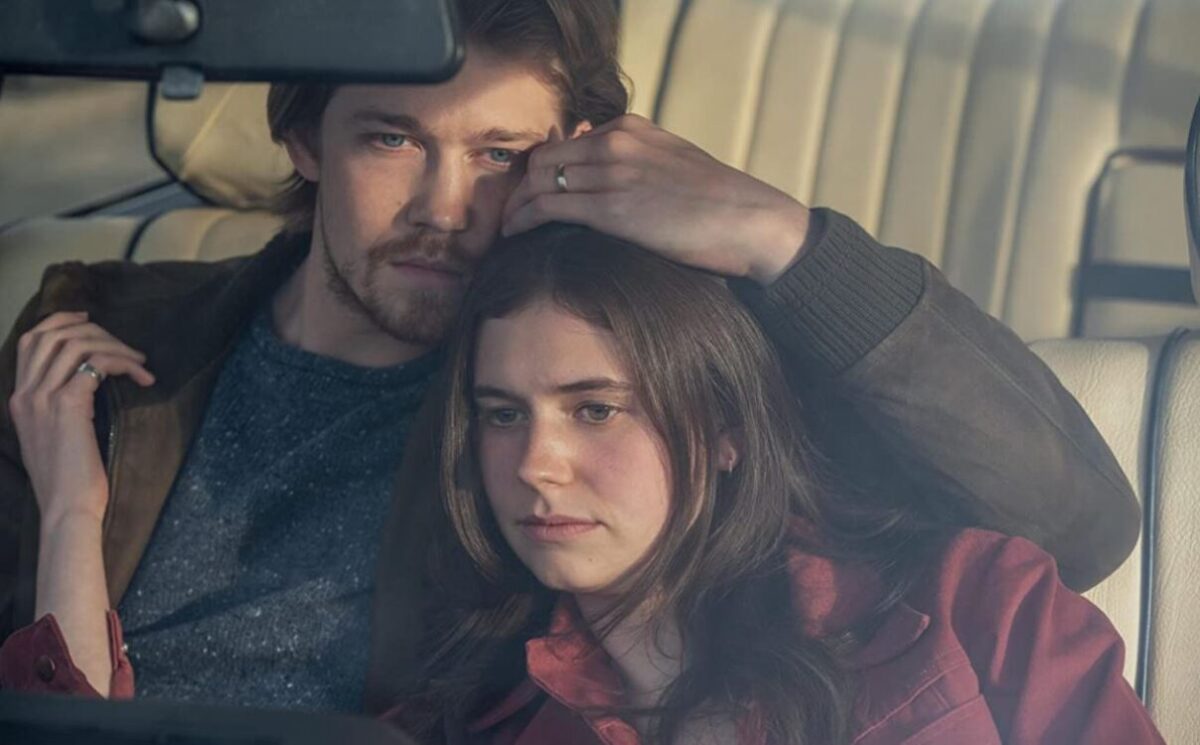 After one gig, a local author Melissa (Jemima Kirke) approaches them to tell them how much she liked what they were doing.

Soon – the girls are invited round to Melissa’s place for dinner. From the moment her husband, a well-known actor Nick (Joe Alwyn), walks in, he and Frances can’t keep their eyes off each other.

It isn’t long before the pair can’t keep their hands and lips off each other either.

Their passionate affair seems to invigorate two lonely souls, but it’s messy and there doesn’t seem to be a way out of this without someone getting hurt.

After Sally Rooney’s novel Normal People became a hot topic of conversation among, at least, younger audiences, the next of her books to get the TV treatment was always going to be eagerly anticipated.

Unravelling through twelve half-hour episodes, the glossy Conversation With Friends gets off to a brisk start, before settling down to become a slow burner – with too many episodes where not enough happens.

There’s far more of Frances just wandering around aimlessly, staring out of windows, thinking about the situation she’s got herself in or staring at her phone, than there are conversations – with friends or otherwise.

And that’s part of the problem – the main two characters, Frances and Nick, are so inarticulate that when they’re together, there’s almost no conversation at all. Perhaps the most authentic part of this series is Nick – the actor’s – inability to string a sentence together without a script; “You make me happy,” is about as eloquent as he gets – most of the time, he converses in little more than whispered grunts.

And while it’s true that many of us do spend too much of our lives with our necks at 45 degrees, tapping and swiping our mobiles, it’s not visually interesting – and having to lean towards the TV to watch the plot unfold through texts could be frustrating for anyone without perfect eyesight or a huge TV. Indeed, with the storytelling being so reliant on mobile phones, don’t try to watch it on a mobile phone.

Outside the context of this plot, Frances would be a likeable enough protagonist – she’s bright, emotionally vulnerable and perfectly sweet, with a sheepish, disarming smile. But she’s not tremendously interesting – and it will be hard for many viewers to root for someone who wilfully sleeps with a married man – and gets so possessive that she feels cheated on when he’s with his wife.

And while Joe Alwyn’s Nick might have a tendency towards depression, apart from his arresting good looks, there is almost nothing of interest about him at all.

Similarly, Bobbi doesn’t serve much purpose other than to turn up and get in the way when the plot requires it. She’s supposed to be Frances’ best friend, but not many people would want a best friend like her.

Rounding off the foursome, Melissa is the only grown-up in the mix, in many ways the only person whose behaviour warrants any empathy.

Seeing Tommy Tiernan as Frances’ alcoholic loser of a father is bit of a comedown after seeing his blistering turn as the exasperated father-figure in Derry Girls. And Justine Mitchell, as her mother, is perhaps the only character on screen any viewer would genuinely want to spend any time with at all.

And given that Melissa is a famous author and Nick is a famous actor, the fact that Frances and Nick are able to continue their affair in a city such as Dublin without having to worry about being followed by the tabloids feels unlikely.

And there are plenty of plot points that feels like they’re signposting something to come, but nothing comes of them. Elsewhere, there are elements that don’t fit the characters – Frances not telling her mother when she receives a medical diagnosis – or cruel – Frances immediately then encountering someone whose own situation is in direct contrast with that diagnosis.

A key dramatic moment doesn’t even happen on screen – we learn that Melissa has found out about the affair in a throwaway comment that makes you scream, “That’s a scene I’d have liked to see!” But maybe it was beyond the actors or writers to deliver genuine drama.

Much as in Normal People, the behaviour on display is largely youthful naivety or thoughtless immaturity. That wasn’t a masterpiece, but by comparison, these characters are even more boring and inarticulate, the plot more arch and incoherent.

We have to spend six hours with these people, but who are we meant to be rooting for, genuinely? The selfish, boring, marriage-wrecker? The depressed philanderer? The self-important hanger-on? The only one you really feel for is Melissa – but her actions require a bit of a leap of faith and while she’s the only one who’s actions can be truly understood by most people, she’s painted as the villain – perhaps the only thing that feels genuine in the circumstances.

Conversations With Friends follows people who are the architects of their own emotional misery as it plods inexorably towards an inevitably downbeat conclusion for eleven episodes, before the final half hour seems to flip the story on its head. Suddenly, inexplicably, Frances grows up. Or does she? Come the end, we wonder whether we’ve wasted our time with eleven episodes, one episode or all twelve.