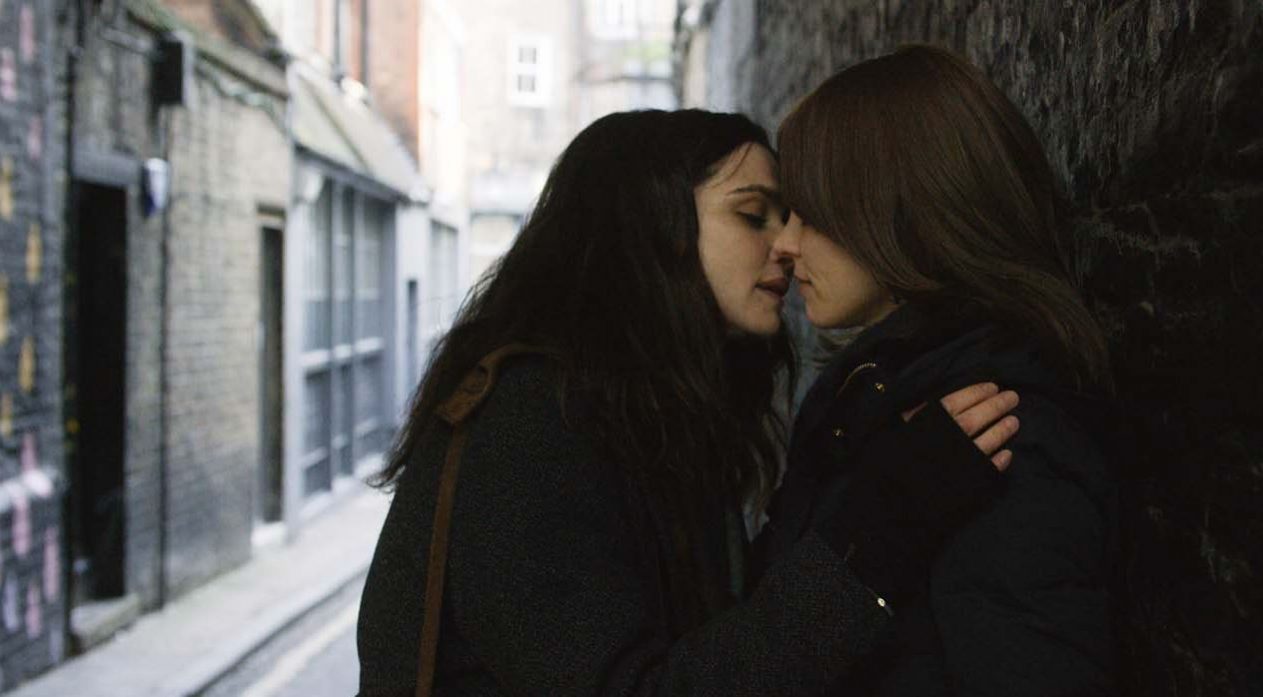 Ronit (Rachel Weisz) grew up in an orthodox Jewish community in north London but is now living, in effect, in exile in New York, where she works as a fashion photographer.

But an unexpected phone-call draws her back home; her father, the local rabbi, has died and whatever has happened in her past, she wants to attend his funeral. And ensure she gets her fair share of the will.

Ronit’s arrival back in London shocks friends and family, who never expected to see her again.

She accepts an offer of accommodation from her two childhood best friends, Dovid (Alessandro Nivola) and Esti (Rachel McAdams), who are now married.

Her return to the community has unexpected consequences for everyone involved, personally and professionally, when a childhood romance is rekindled

Given that every poster for this film features a close-up of the two Rachel’s kissing, what purports to be the big twist of this drama is given up before the audience even enters the cinema.

And it’s a twist which can only have dramatic consequences, even outside the confines of an orthodox Jewish community.

So rather than heighten that drama, setting it in a peculiar blend of Jewish areas of north London – including bits of Golders Green, Edgware and Maida Vale, among others – serves mostly to shine a spotlight on a rarely seen, small-C conservative community.

But when you live within a society where – if this presentation is to be believed – men have to breath in as they walk between rooms lest they lightly brush their clothes against those of a woman standing near the doorway, the stigma associated with lesbianism is, perhaps, not surprising.

The drama was further weakened by the fact that this was the rekindling of a childhood attraction rather than the awakening of undiscovered homosexuality – it explains why Ronit doesn’t feel welcome back home, but shuts down opportunities for surprises and true character development.

Perhaps the bigger earthquake in the narrative – and something that wouldn’t look so tantalising on the poster – is what happens when Ronit tries to claim her share of her father’s estate.

It feels a little churlish to criticise much of this film, since the performances are all strong – and heartfelt – particularly Alessandro Nivola, who seemed genuinely torn between tradition, duty, love and honour.

But the main questions to consider are who is it aimed at – and what is the message?

Religious Jewish communities are unlikely to feel comfortable seeing a film that paints an unsympathetic picture of them as intolerant, misogynistic and homophobic.

Progressive Jewish communities could feel frustrated that such stereotypes are being presented on screen, providing ammunition to anti-semites.

Anti-semites might like it as it will give them ammunition – and lesbians might like having a film they can relate to for a change, but neither of these groups would help the producers – including Rachel Weisz herself – recoup their budget.

And the message isn’t that true love conquers all or that rebelling against the authorities will eventually get you what you want or that natural justice will always win out. The way the narrative unfolds – without wanting to spoil it – delivers the somewhat nihilistic message that if you are disobedient, it’ll destroy your life and those of everyone you love. It almost presents Ronit as a lonely, bitter, selfish, predatory character who returns to her childhood home, destroys  the lives of everyone she used to love, and then disappears again.

The film is set up as a story about Ronit, but the only characters who elicit any sympathy are Dovid and Esti, whose lives are destroyed by this whirlwind from their past.

The geography of the film also felt unnecessarily frustrating – a main character lives near a major cross-roads is in Golders Green, while the synagogue (which would be walking distance) is in Maida Vale, more than 4 miles away and a kosher restaurant visible in the background in another scene is in Edgware, 6 miles in the opposite direction. There are synagogues in Golders Green, as it happens. And Kosher restaurants. Perhaps they’re not cinematic enough? Then there’s the peculiar notion that someone heading for Newman Passage – near Goodge Street – would get off the tube at Charing Cross, about a 20 minute walk away. And I wonder what hotel in London allows smoking in bedrooms?

Such details wouldn’t trouble most people unfamiliar with the locations themselves, but the fact that they occurred to me might suggest I wasn’t as emotionally engaged in the story as I might have been. A little suspension of disbelief goes a long way, but if you can’t suspend your disbelief about which tube stop a character might use or which synagogue is closest to their home, it is perhaps illustrative of the success – or otherwise – of the narrative.