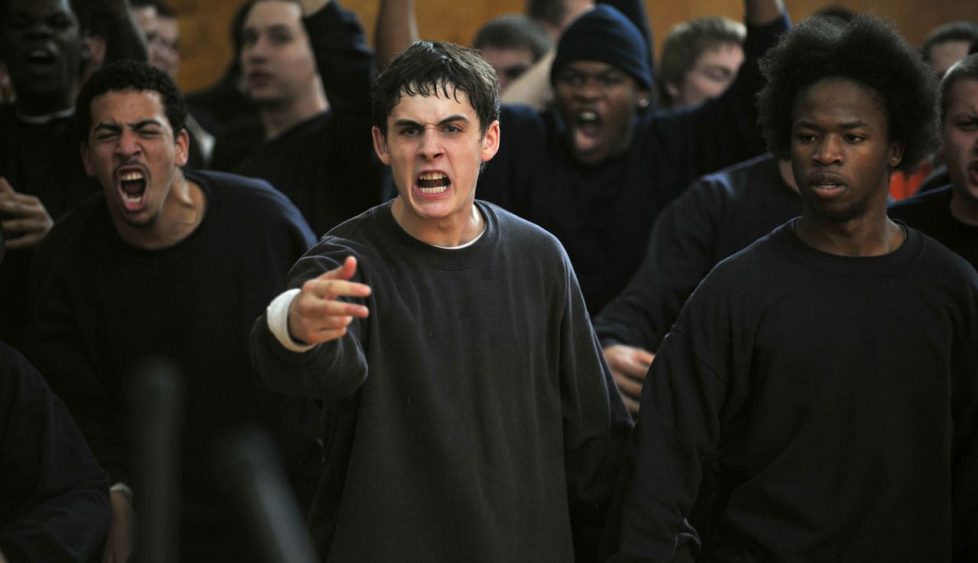 Teenaged drug dealer Davis (Shane Kippel) is busted by the cops while he’s having sex with his girlfriend in his bedroom at his parents’ house.

Angel (Mateo Morales) and his mates boost cars at gunpoint until he’s caught.

The pair of them find themselves arriving at Enola Vale Youth Correctional Facility at the same time as the more hardened Butch (Adam Butcher) who’s no stranger to such institutions. On this occasion, he’s locked up for assaulting a guard who provoked him at another facility in Montana.

Under the watchful eye of the stern, but fair Officer Goodyear (Lawrence Bayne), the teenagers have a tough job, trying to settle in and be accepted by their fellow juveniles.

By keeping your head down, you can get promoted up from the Level 1 entrants to the Level 3s, who get the best jobs and the easiest ride.

But corruption is rife – the Level 3 bullies take a dislike to the new guys – and it’s clear from the outset that this isn’t going to be an easy ride for Davis, Angel or Butch – but they’re not the kind of guys to take punishment lying down.

Updating Alan Clarke’s 1970s movie Scum, Dog Pound presents us with the kind of fearsome images that are sure to put any waverers off a life of crime.

There is nothing good about being locked up – it’s mostly self-interest, betrayal and violent one-upmanship – and what little camaraderie there is, is destructive.

In his first English-language film, French director Kim Chapiron delivers a gritty, chilling study of lost souls doing their best – or worst – to find themselves again.

From bathroom beatings to refectory riots, the action is visceral and will leave you shaking.

While it’s a powerful drama and you feel for the characters being subjected to such brutality, it’s difficult as a viewer to know how to respond. Most of the youngsters are guilty of drugs offences, armed robberies or worse – it’s not like they don’t deserve some punishment – and in most cases, they give as good as they get. And the characters aren’t likeable enough for us to feel particularly sorry for them. With few exceptions, they’re bad people – although some are more misunderstood than others; Butch’s main crime is having a bit of a short temper.

If the film is saying “detention is unpleasant,” you’d expect it to be and Daily Mail readers – among others – would throw their fists in the air – and rotten eggs at the screen – if they were presented with the oft-seen vision of prison cells with TVs and wifi.

The story – such as it is – is rather basic. Three guys turn up and get roughed about a bit, more by their contemporaries than by the system – while the guards are going through crises of their own. No-one really learns or changes – there’s no sign that if they get out, they’ll go straight. But there’s no sign that they won’t either. Maybe the message is correctional facilities don’t correct?

And unlike last year’s magnificent A Prophet, which had something to say about everything from the prison system to society as a whole, Dog Pound feels – by comparison – small, parochial and peopled by stereotypes.

Impressive for its low budget, this is powerful while you’re watching it but won’t stick with you for long afterwards.