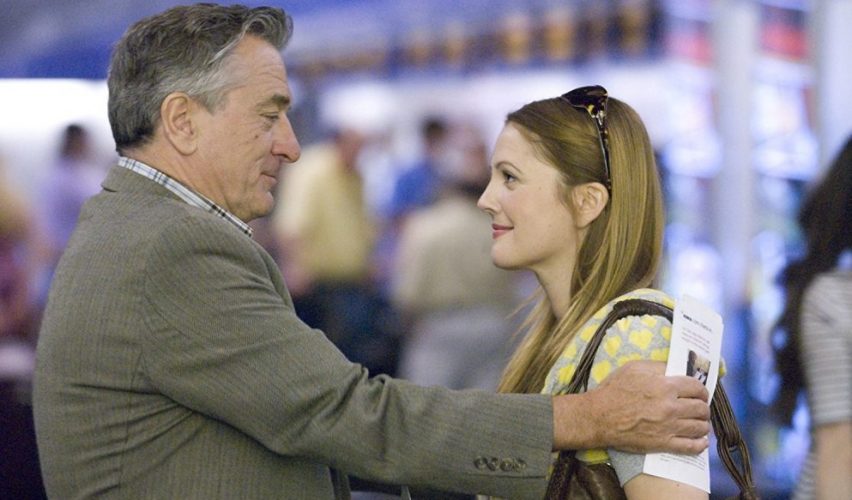 Frank (Robert De Niro) is a recently widowed retired telephone engineer who’s just been diagnosed with the kind of medical condition that – along with his bereavement – is making him reconsider what he wants from the rest of his life, not least how to reconnect with his four estranged adult-children.

First, he heads to New York to visit his artist son Jack (Lucian Maisel). Unable to find him, he just leaves a note under the door of his apartment and heads off to catch up with Amy (Kate Beckinsale), a successful advertising executive, who’s married, with a cantankerous teenaged son, and a house so spectacular, it wouldn’t look out of place in the smartest parts of the Hollywood Hills.

Leaving her with a letter to be opened later, Frank heads off to the next on his list – Robert (Sam Rockwell). He believes him to be the conductor of a Symphony orchestra, but when he arrives, Frank finds that his true role is rather more modest.

Next, there’s Rosie (Drew Barrymore), who’s living in a fantastic apartment in Las Vegas, where she’s working as a dancer in shows at the top hotels. Although she’s the most welcoming of the siblings, their visit is somewhat disrupted when she’s forced to babysit for a friend’s child.

As he spends time with each of his estranged offspring – or at least tries to – Frank realises that they’re all hiding secrets from him – some, more blatantly than others. It’s also clear that every last one of them was much more comfortable with their mother than they are with him.

Frank tries to bring them all back home for a Christmas meal, where he has to decide whether to challenge them about their lies, their secrets and the distance they’ve created between them – or whether it’s enough just to have reconnected with them.

This is an unusually downplayed performance from Robert De Niro. He spends most of the film, criss-crossing the United States, shuffling around like an old man in his slippers, confused, naïve and feeling sorry for himself, unable to understand quite why his life hasn’t gone to plan.

Why did his children prefer their mother? Why have they all run away and cut themselves off from him since she died? OK, so he might have pressured them into striving to reach the top of their game – but he did that for their own good, right? What father doesn’t want his children to succeed?

Depending on your own upbringing, and your on attitude towards your parents, this film will resonate differently. Many will recognise the father’s feeling that he often felt like a servant or answering machine, just passing the phone – or just messages – to his wife, when his children called.

On one level, the film portrays Frank as a bullying father who made life unbearable for his children and made them need to feel that they were always impressing him, when if he knew the truth, he might feel let down. Distance hides such perceived failure.

But on another level, we see a loving father who spent the early years of his fatherhood doing nothing but trying to give his children the best start in life, encouraging them to do what they appeared to be good at.

His children harbour grudges – some will think fairly – others will think selfishly.

This is a film about pretense – putting up barriers to shield people from the truth and perceived disappointment. But it’s also a film about trying to shake off such notions – using tragedy as a springboard to bring what’s left of the family unit back together, learn to understand each other and leave all difficulties in the past.

It’s a cinematic wiping clean of the slate – coming to terms with the past from each person’s perspective and then forming a new future.

All of which seems warm and worthy – but as a piece of film-making, this is oddly cold.

The children appear to be harbouring the kind of ill feelings that are usually reserved for fathers who sexually abused their children, when we’re presented with a group of young adults who seem like they should me more reasoned than that. This makes De Niro seem like a fatalistic loser while his children come across like screaming babies throwing their toys out of the pram.

Good performers fail to convince, because the film doesn’t seem to be clear about its own direction.

From a character point of view, someone who is determined to reconnect with his children at all costs, putting his health in jeopardy to travel around the country to heal old wounds, he seems to give up far too easily at each juncture. The film doesn’t give him the courage of his convictions – it’s not even like a growing realisation during his quest slowing turns him – he doesn’t really change throughout the film.

For a film about learning and acceptance, the lessons seem a little forced and contrived.

It’s also too slow, as Frank sits on this train or that bus, has a run-in with a vagrant or a none-too revealing hitch-hiking experience.

Cinematically, it’s not that interesting – just a lot of talking. And a motif running through the film, harking back to Frank’s years as a telephony professional, is underwhelming and overused.

In keeping with the Winter Olympic spirit, an ice-dancing judge might give this film a good score for artistic impression but a lower one for technical merit.