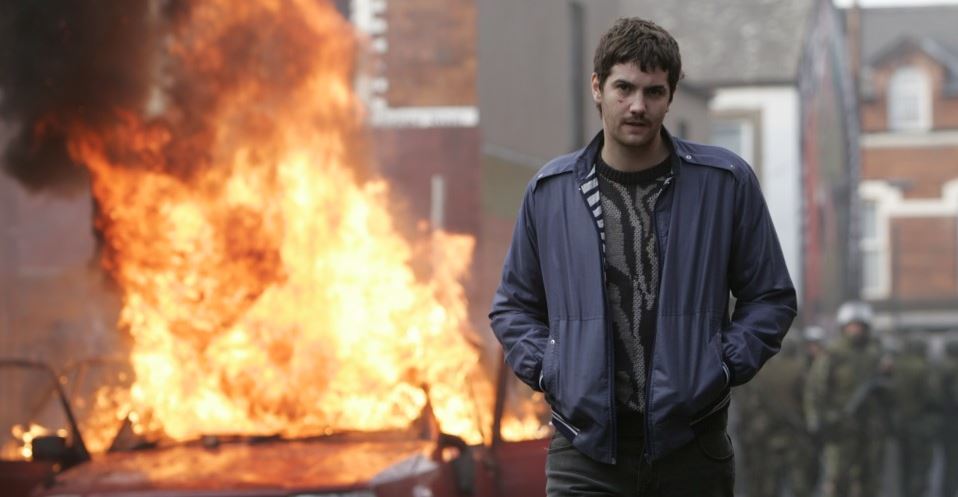 Martin (Jim Sturgess) is a charming, teenaged trouble-maker, selling stolen designer clothes from a suitcase, door-to-door, on his run-down catholic estate in west Belfast, in the early 1980s.

He’s never been a fan of the local IRA gang bosses and seeing them beat up one of his friends for no good reason confirms his anger towards them. But this isn’t an environment where you can openly oppose the militants.

When he’s approached by the local Special Branch agent Fergus (Ben Kingsley), Martin’s persuaded to sign up to the IRA and feed information back to the police.

Over the years, his information helps to save the fifty men of the title, but the longer the arrangement continues, the higher up he rises in the IRA and the higher the stakes become.

How much longer can he get away with running IRA cells, while feeding intelligence back to the British – and knowing how the IRA rule their roost with an iron fist, what effect will his double-life have on his loved ones, if the truth comes out?

This is one of those frustrating films that starts with something shocking that happens in the future and then flashes back to see how the character gets to that point – so from the outset, you know whether things are going to work out for him, as you see what happens some years into the future.

This immediately takes some tension out of a film which is built on tension. Is he going to be discovered? Well, the bit before the titles tells you that.

Furthermore, since you know this is based on the memoirs of the IRA informant Martin McGartland, well – he couldn’t have written his memoirs if he were dead, now, could he?!

All that aside, what we get is a shocking insight into the violent world of IRA gangsters and their brutal reign over the Catholic estates during the troubles.

Sturgess – recently seen singing Beatles songs in Across The Universe – trades in a Scouse accent for a convincing west Belfast accent and becomes altogether rougher and tougher in a frighteningly believable performance.

On a personal level, this is ultimately a tragic tale of a man who’s forced to live with the consequences of the life he’s chosen – a life that in recent interviews he’s insisted he doesn’t regret – but the subject matter is perhaps wider than that.

Arguably, the film’s main weakness is that it plays more like an action film than a political thriller, so there’s little exploration or explanation of the rivalries that divided the communities during the troubles and the motivations that drove them.

But in truth, in the violent world of IRA informants, the cells they infiltrated and their British handlers, the unionists didn’t really come into it.

With so much antagonism on just one side of the divide, it’s perhaps understandable why all these years later, what peace there is still seems to be fragile.