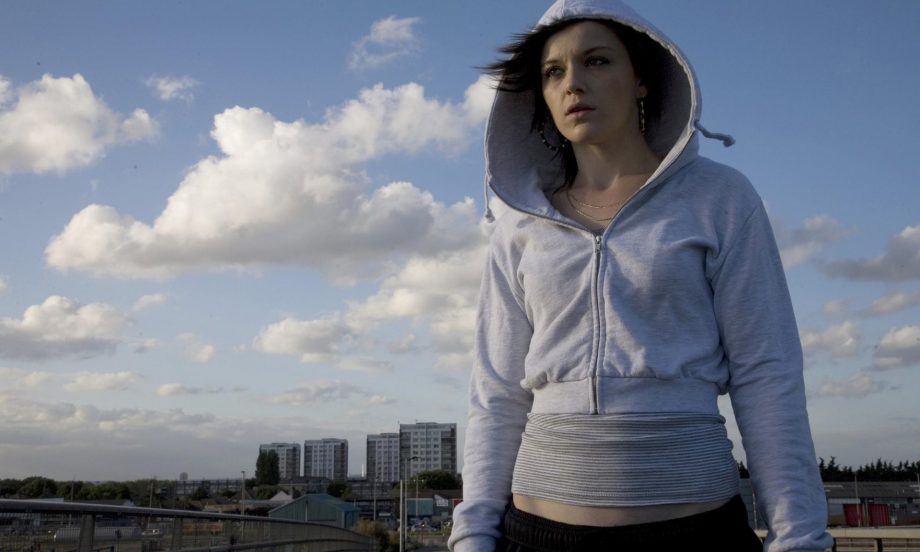 Mia is a trouble-maker in the true sense of the word – everyone on the estate hates her – from the other kids on the block (well, you would hate a girl who head-butts you with little provocation, I suppose) to their parents (throwing bricks into their flats probably wouldn’t endear you to them too much). The film even opens with Mia apologising to a friend who’s stopped speaking to her.

This is a film about a loner – someone who doesn’t fit in.

She argues constantly with her mother and sister – both of whom give as good as they get.

But one morning – a calming influence enters their lives – her mum’s new boyfriend Connor (Michael Fassbender).

The tight-torsoed security guard begins to spend more and more time with the family and both of the daughters appear to accept him as a rare responsible male influence in their lives.

Until his arrival, the only warmth Mia ever shows is to a poorly treated horse she walks past from time to time – now, although she won’t show it publicly, she clearly feels warmth towards Connor.

Clearly, for the first time in years, Mia finds herself as part of what approximates to a happy, family unit, even going on a trip to the country together.

But is everything as innocent as it looks? Is Connor the perfect new step-dad material? Well – the drama has to come from somewhere!

What begins as a simple, estate-set character drama erupts into a sprawling, life-changing voyage of discovery in which trust is abused – families are destroyed – and relationships pushed to their limits.

Andrea Arnold has gone from strength to strength, since turning her attention to film-making – from an Oscar for her short film Wasp to winning prizes at Cannes for her first two features – Red Road and now this.

Red Road was a broader-based drama, with deeper characters with darker, more complex pasts, whereas – in truth – the relationships here are by turns soap-opera and sitcom.

Katie Jarvis is a revelation in the lead – new to acting, but raw with emotion. Dancing in a desperate attempt to work off the energy that could otherwise get her in even more trouble, her bristling relationship with her sister is highly comic, while her love-hate bond with her mother feels tremendously authentic.

Fresh from Inglourious Basterds – and his powerhouse performance as Bobby Sands in Hunger – Michael Fassbender shines again here in an ambiguous role; is he lured by a precociously magnetic temptress or does he possess the full grooming toolkit of the most predatory paedophile?

As a viewer, you’ll be screaming at the screen as the chilling events begin to unfold, once a single scene flips the plot from blackly-comic but mild (or as mild as head-butting and brick-throwing can be) character study to one of the darkest of pacy thrillers, with every ounce of humour drained from the screen.

The first part of the film is more successful, because exciting as the final act becomes, on too many occasions, when the tension begins to build to a climax, like a poor comedian, Arnold fails to pay off her set up – she ratchets up the excitement only for it to be extinguished with a phut – which is disappointingly unexpected, from a director not known for holding her punches.

But it turns out this maturing director is – for now – far more adept at the more intimate character drama than the broader action thriller.