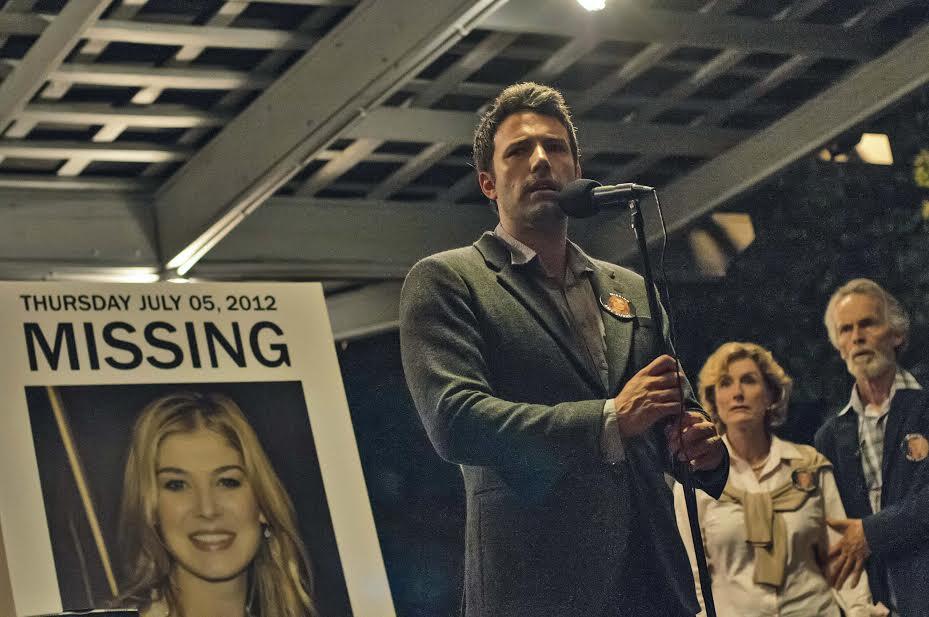 It’s Nick (Ben Affleck) and Amy’s (Rosamund Pike) fifth wedding anniversary. Nick starts the day with a quick visit to the bar he runs with his sister Margo (Carrie Coon). While he’s there, he gets a call from a nosy neighbour; his front door is open. Nick rushes home.

He arrives to find no sign of Amy and some signs of a struggle. He reports her missing and Detective Boney (Kim Dickens) and Officer Gilpin (Patrick Fugit) are quick to arrive and search the house. Finding some small splashes of blood, the police decide to treat the disappearance seriously and arrange for Nick to give a press conference, calling for information about her whereabouts.

As the days go by, the police begin to suspect that Nick might have had something to do with Amy’s disappearance and the media are quick to brand him a suspect.

With only Margo on his side – and as more information emerges, even she starts having her doubts – Nick comes under increasing pressure to prove his innocence.

Only two people know for sure whether Nick has killed Amy and hidden her body. Nick is one of them. The other is gone.

When a highly acclaimed novel is brought to the screen, from a script by the novelist, directed by one of the most interesting and respected film-makers in Hollywood and starring an actor at the top of his game, expectations are always going to be high.

It’s tough to know how to describe a film like this; a large part of the audience will have read the book, so they’ll know about every twist and turn in advance, but for the rest, it’s laced with twists that will throw you off-balance at almost every turn.

What’s pleasing is that the twists are largely both unexpected and believable and the more motives Nick has for wanting to dispose of Amy, the more the film urges us to back him.

Once the key question is answered, the film switches from a “who dunnit” to a “how dunnit” but although the characters then become somewhat simplistically black and white, it’s no less interesting.

Through a series of flashbacks, we learn about the state of Nick and Amy’s marriage and the neatly fractured timeline uncovers a range of fascinating characters, from Amy’s previous lovers (Neil Patrick Harris and Scoot McNairy), to neighbours, a high-profile celebrity defence lawyer (Tyler Perry) and to a sensationalist, man-hating TV anchor (Missi Pyle). Even Kim Dickens’ lead police investigator becomes an unexpectedly interesting screen presence.

As well as unfolding as a gripping thriller, on one level, Gone Girl is also an effective satire on the way the fickle news media latches onto a story and prioritises guesswork over facts for ratings and self-aggrandisement.

There are a handful of plot points that jar slightly, down more to the source material than the film-making – the dramatically crucial breakdown of Nick and Amy’s apparently perfect relationship isn’t entirely convincing – but even they are largely forgivable, as they keep it pacey and tie up what could otherwise by clumsy loose-ends.

David Fincher handles a complicated narrative with clarity, with each revelation casting everyone in a whole new light, and Ben Affleck and Rosamund Pike both give delightfully complex performances – empathetic and frightening where necessary.

The running time feels slightly bloated and like so many films, there are a few too many endings – once the true facts emerge, while you’ll be reaching for your coat, Fincher is still busy milking the consequences just a little more than is necessary.

But when a story is this well told, it seems a bit churlish to begrudge the film-makers another few minutes of self-indulgence and the odd moment of cinematic shorthand can be excused.

Gone Girl is one of those rare films that’s likely to please audiences, critics and awards bodies equally.