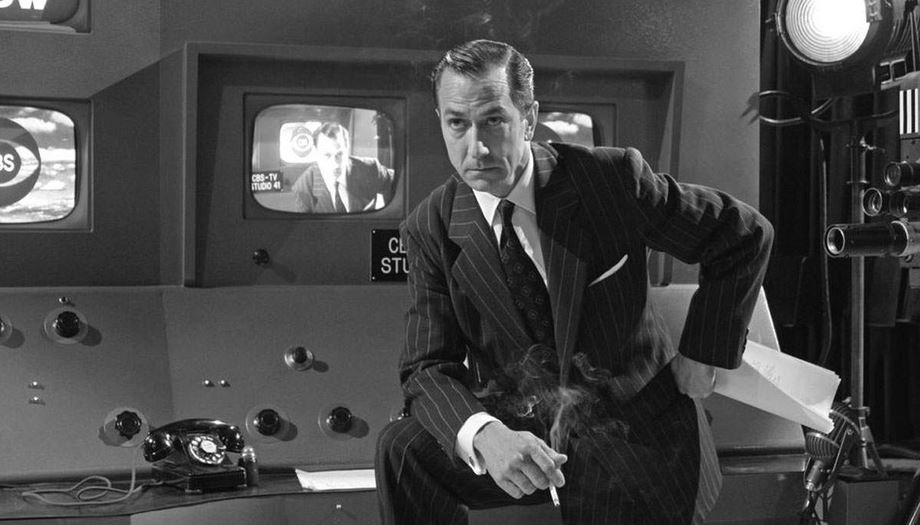 1950s America – and Senator McCarthy is on his anti-communist witch-hunt.

When a young American serviceman is suspended because of his father’s alleged links to communism, the respected CBS TV journalist Ed Murrow (David Strathairn) decides it’s gone to far.

Along with his producer, Fred Friendly (George Clooney), he begins a concerted attack on the senator (archive footage of the man himself).

The sponsors of their show begin to panic, leaving Murrow and Friendly to finance their research themselves, as the network takes a decidedly hands-off approach.

Clooney is one of those film-makers who can flip comfortably between the mainstream entertainment of an Ocean’s 11 or Intolerable Cruelty and highly-charged political statements like this or the upcoming Syriana.

Shoving a group of highly intelligent journalists in a room, with nothing but strongly-held opinions and smoke, he creates a surprising amount of tension.

The close-ups and exclusively interior action gives a suggestions of the sense of paranoia pervading the media at the time.

The black-and-white photography was chosen because Clooney wanted to use archive footage of Senator McCarthy himself, but it turns out to be a tremendously effective way of recreating the period, almost to the extent that if the film wasn’t filled with highly recognisable supporting actors, all of whom do impeccable jobs, you might think the whole thing was a fly-on-the-wall documentary.

That the film is all about putting everything on the line for freedom of speech gives it a particularly topical feel.

It’s an unusually thoughtful and intelligent, if wordy film that thoroughly deserves the awards and nominations heaped on it.

It’s not for fans of “gorgeous George” but will appeal to viewers with patience and a sense of how history shapes the present.