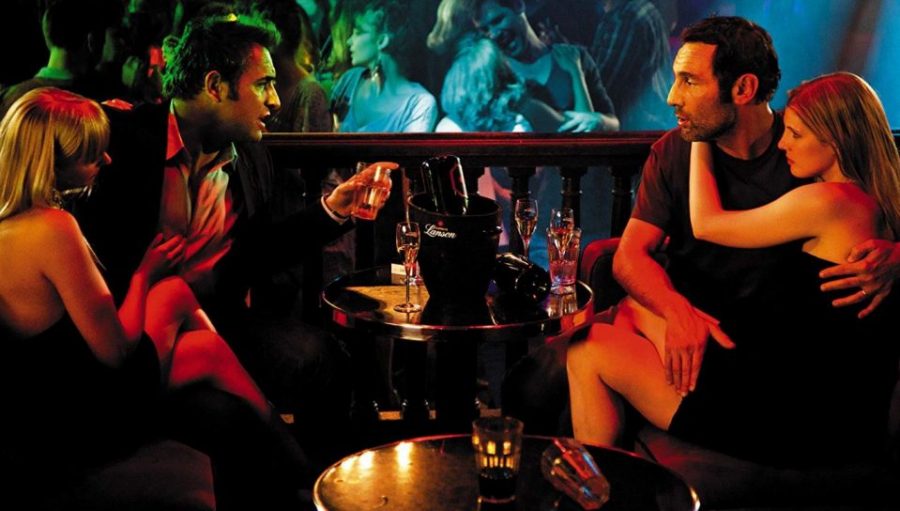 Fred (Jean Dujardin) and Greg (Gilles Lellouche) are a pair of philandering husbands who simply can’t keep their trousers up.

Greg can’t control himself, even though his wife has cottoned onto his infidelity, despite Fred doing his best to cover for him. Fred, himself, is less concerned about how his own wife responds to their late nights out on the prowl.

The pair decide to get it out of their system once and for all with a visit to Las Vegas, and we all know where things that happen there stay.

This is one of a series of sketches involving fidelity and promiscuity, unrelated except by a support group for unfaithful husbands, attended by some of the protagonists – not all of them though, as many of characters are played by the same two men.

There’s much to admire here, from sparkling performances from the two leads to some interesting moral dilemmas to contemplate.

But not only is it disjointed, but this isn’t signposted in any way, so it takes two or three stories to pass before you realise that you’re actually watching different characters, rather than flashing back to earlier incidents in the men’s lives. It was only the fact that Dujardin has an iPhone in the second film that gave a clue that we weren’t watching Fred some years earlier, before he’d come out of his shell – although this could’ve been an anachronistic continuity error.

Sometimes the protagonists are smooth, sometimes they’re losers. Sometimes they get the better of the women, but usually they come off worse.

The Players is a basically a string of short films, with one scene pulling together some of the characters – with a reprise of one of the stories at the end.

Clearly, some of the single-scene vignettes – while hilarious – are the cinematic equivalent of a one-liner, making the film feel more like a night of open-mic stand-up comedy than a coherent piece of entertainment.

Many of the short-films, though, have enough legs to work in a longer form – in a few cases, the characters are so interesting that it’s frustrating not to be able to follow them for longer.

In particular, a story in which Dujardin plays alongside his real-life partner Alexandra Lamy follows interesting themes and enables the actor to show his dramatic side as well as his ability to play the jester.

It would perhaps have been better to make a few separate features along a theme – think Kieslowski’s Decalogue and Three Colours trilogy or Eric Rohmer’s six moral tales – rather than trying to squeeze so much into one film.

The differing moods and variety of directors leads to a film that’s as uneven as it is disjointed, in narrative and in voice, which is ultimately a frustrating waste of a lot of talent.

It’s particularly disappointing to see the Oscar-winning Artist director Michel Hazanavicius returning to the big screen with his Oscar-winning leading actor Jean Dujardin in a piece of work which fails to show either off to their fullest.

It’s also guilty of one of the biggest crimes some foreign language films can inadvertently commit; having an English title that doesn’t correctly reflect the sense of the original – the characters are indeed all unfaithful, but they’re certainly not all players.

It’s all entertainment, but leaves you wanting more while being frustrated that you’ve had to sit through so much.