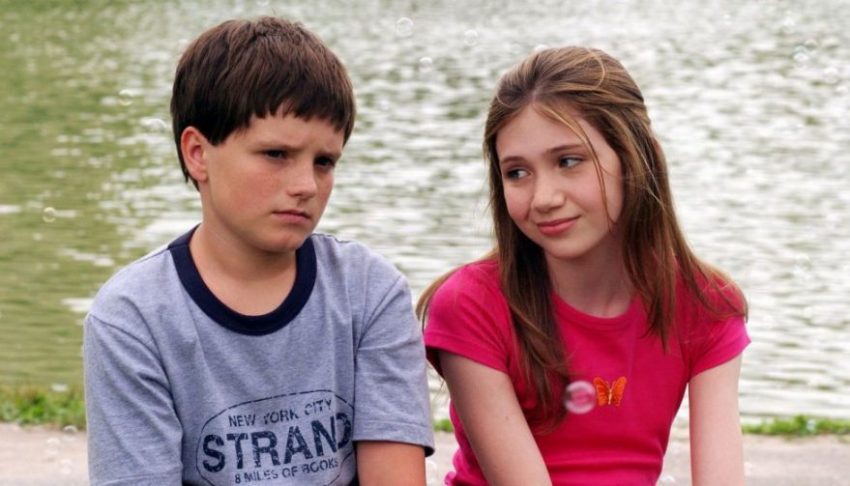 Gabe (Josh Hutcherson) is having problems with his relationship with Rosemary (Charlie Ray) – he loves her so much that his stomach hurts. At the very thought of losing her, he cries like a kid – but then, that’s because he’s just ten years old.

In Manhattan’s Upper West Side, Gabe is experiencing the trials and tribulations of love for the first time. Until he met eleven year old Rosemary at his Karate classes, girls made him and his friends sick for a different reason.

All the usual obstacles are thrown in the way – social status, the seemingly perfect love rival, Rosemary’s family sending her away for the summer – and all the while, he’s trying to come to terms with the break-up of his parents (Bradley Whitford and Cynthia Nixon); they’re still living in the same apartment, but Mum’s already started dating again – all of which serves to show Gabe just how complex the path of true love really is.

The one person he always seems to be able to rely on, comes rain or shine, the most calming influence in his life seems to be the wise – and wise-cracking – elevator operator (Sex and the City’s Willie Garson).

Many people turn off at the thought of romantic comedies – others turn their backs on the stomach-churning nature of so many films involving children – so the idea of a romantic comedy centred on pre-teens might sound, on the surface, a little more than you could bear, without sticking your fingers down your throat.

Oddly, then, it actually turns out to be one of the most charming, warm, easy and pleasant films of the year so far.

Most worryingly (maybe it just says something about me!), it’s surprisingly insightful when it comes to life and love – not what you’d expect from a ten year old…this is some emotionally precocious kid.

Hutcherson’s philosophising, heart-warming internal emotional battles, romantic advice from an imaginary hero and his New York habitat – not to mention the film’s title – could make you see this film as a Woody Allen movie for primary-school pupils – a “little Manhattan” if you like. Like his considerably older counterpart, after watching this film, you feel that you’ve learnt a bit about yourself and other people – and you want to jump on the first plane to JFK.

As Gabe proudly traverses his nine blocks of the Upper West Side on his micro-scooter, he comes across as a likeable figure you can identify with.

As Rosemary, Ray does even better – it’s probably a bit too early to predict, but her charming maturity, composure and self-confidence makes her a joy to watch. She’s unquestionably a talent to watch for the future, which sadly means that it probably won’t be long before Hollywood starts wasting her evident talents on cheap teen horror flicks and clichéd high-school rom-coms. How she’ll fare when she gets past those hurdle, into the world of grown-up movies is another thing entirely.

Even the most hardened cynics will find it difficult not to find this film rather sweet…in a good way. Or maybe this film has helped me discover that I’m more of a hopeless romantic than I thought I was.