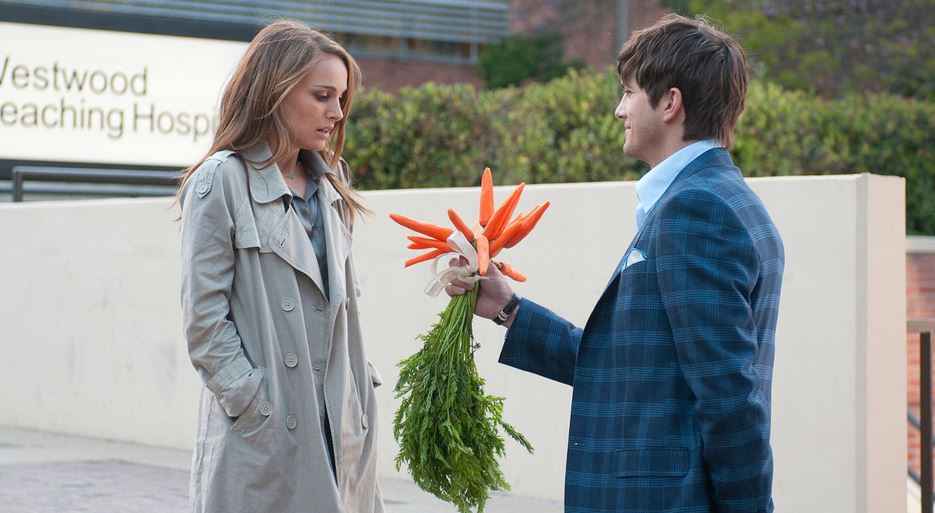 Several years after Emma (Natalie Portman) and Adam (Ashton Kutcher) met at a summer school, they bump into each other again at a university party. By now, he has a girlfriend, but an attraction between the young adults is clear.

Another few years on, she’s now a hospital doctor and he’s working as a TV researcher. He’s now single – and discovers that his TV personality father (Kevin Kline) is now dating his ex-girlfriend.

This drives him to find someone to sleep with, so he calls pretty much everyone in his iPhone until he hits the jackpot.

The next morning, he wakes up on a strange couch, unable to remember anything about the previous night. He discovers, to his relief, that he’s spent it with Emma.

Over the weeks that follow, they see more and more of each other, but the agreement is – it’s just for sex – no falling in love. Their friendship couldn’t handle that.

For her, there are suggestions that something might happen with a senior doctor (Cary Elwes) while for Adam, his floor manager (Lake Bell) is clearly desperately in love with him.

But we’ve seen the posters – and more than a handful of these romantic comedies – so when this film takes a new look at the When Harry Met Sally question and asks whether men and women can have sex without the love part getting in the way, risking spoiling the friendship, while the real answer is “of course it is,” the movies have to take another path.

No Strings Attached – ironically – is like a puppet, acting precisely in accordance with the strings being pulled by its Hollywood studio puppeteers. We have the two main characters who we are told in Act One can’t be together, but we know from the posters – if not the genre formula – that they have to end up together in Act Three.

So this film – as in all others – is about how Act Two brings this supposedly impossible couple together.

And what keeps them apart – apart from their inexplicable need to sleep together without commitment – is little more than their own insecurity, since inappropriate alternative relationships don’t really play any serious role in stopping either falling for the other.

We even get the race-against-time car-ride to the out-of-town wedding.

Neither of the big-name leads look particularly comfortable in the kind of one-dimensional characters that wouldn’t be out of place in a sit-com, along with most of the caricatured supporting cast.

The only strings to the bow of this arch tale are a welcome comic turn from a maturing Kevin Kline and the slight twist – a la 500 Days of Summer – which sees the guy, rather than the girl, as the one struggling with the lack of commitment from the object of his affections.

All of which might sound a little cruel for what is, essentially, a bright and breezy, entertaining romp, which shouldn’t be taken too seriously, with perfectly likable characters, even if they do act, necessarily for the plot, completely against their own archetypes.

But it’s well below the level that any of those involved should be achieving. Five years after the far sharper and more surprising My Super Ex-Girlfriend, perhaps Ivan Reitman should stick to producing and leave the directing to his son, Jason.