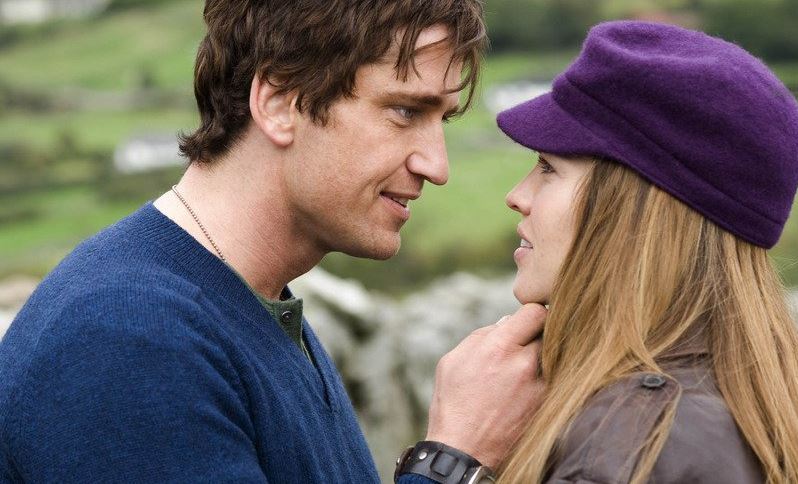 Holly (Hilary Swank) and her Irish husband Gerry (Gerard Butler) have one of those relationships dogged with bickering and simmering frustration and antipathy.

This doesn’t make Holly any less upset, though, when after the first scene, Gerry dies of a brain tumour.

Don’t worry – I haven’t given anything away – this film isn’t about how quickly their marriage would’ve broken down had he lived; it’s about how she tries to come to terms with being a widow.

Not too well, as it turns out, as there are rather too many reminders – from the man himself…

After the funeral, she’s given a tape recorded message, in which Gerry tells her he’s written her a series of letters which will be delivered over the coming weeks and months, urging her to try new things and go to new places, to make sure that she leads a fulfilling life without him – and to keep his memory alive.

Oh – did I mention – I’m pretty sure it’s meant to be a romantic comedy.

Death? How funny. Emotional tricks and games to stop her moving on? How romantic.

What kind of a romantic comedy tries to warm your heart by building its story around the premature death of a jealous husband, who spent his whole marriage arguing, and then does his level best to stop his wife moving on, when he does?

Leaving a succession of notes for your widow, for her to find in the months after you die, is not quirky, quaint or sweet – it’s rather morbid and frankly quite selfish and cruel. He’s holding back her future.

Of course, against this vile, bad-tasting backdrop for a rom-com, Holly does indeed encounter some potential new beaux, and thankfully, although it looks like we’re heading for some clichés, they’re not always the most obvious ones.

But Harry Connick Jr – in a reprise of his Will & Grace loser of a persona – is far too wet to be in any way appealing, while the man she clearly prefers – Irishman William (Jeffrey Dean Morgan) – ticks every box on the “cheesy-rom-com-leading-man-check-list” – as dashing as he is inappropriate.

The whole Irish-set part of the film is unfathomably clunky, and there’s nothing best friends Gina Gershon and Lisa Kudrow can do to rescue it. The Oscar-winning Swank herself should stick to drama – here, she looks like a second-division Amanda Peet, without the charm or comic timing.

This is where all the clichés really kick in – secrets spilling out at inappropriate moments – the only Irishman they know turning up to save the day on cue, like he’s the only man in Ireland, in one of the most contrived scenes in modern-day cinema.

Then in what can only be meant to be a twist, one of the most incoherent plot developments imaginable involving Holly’s mother made me want to rip the screen into shreds.

From the start, this was a couple who should not have been together. They should have divorced after the first scene, sparing us the misery of having to sit through one of the most unpleasant and hateful films of any genre for months.