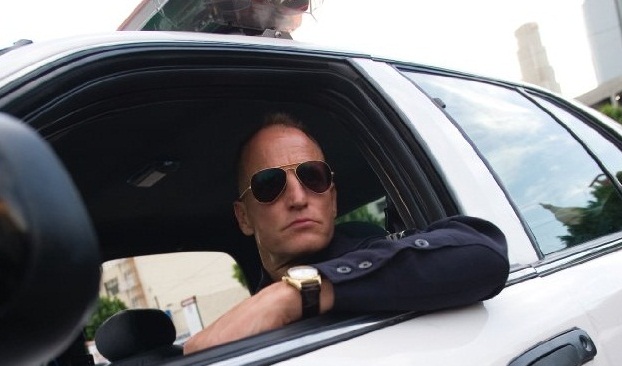 Dave (Woody Harrelson) is one of those dirty police officers that exist only in the movies and on TV – or at least you’d hope so.
He lives a rather peculiar commune-like lifestyle with his two ex wives, sisters played by Cynthia Nixon and Anne Heche, and the daughters he has with each of them.
He doesn’t enjoy life and he certainly doesn’t enjoy his job, but he likes the power that comes from being a cop and the control he has over his superiors by knowing the law better than them.
When he’s caught on film beating a black man, in a neighbourhood where LAPD had previously been hit by its biggest dirty-cop scandal, the media descends on him and his bosses have no choice but to take action.
Always trying to get one up on the prosecutor (Sigourney Weaver) and an internal affairs investigator (Ice Cube) with help from a retired cop (Ned Beatty) who, in his day, was every bit as dirty as him, Brown fights to stay in uniform – more because he knows nothing else and without it, he’d be a bitter nobody.

Set in 1999, Rampart is a stylish police drama – reminiscent of a small-scale 1970s film, like the recent Drive – with a searing central performance from Woody Harrelson, as an unlikeable anti-hero who can’t even be described as misunderstood.
Even though he insists that everyone he’s wronged – even killed – deserved it, he’s far more embittered vigilante than dodgy cop.
Somehow, he makes The Shield’s Vic Mackey seem loveable and cuddly, but not by being more consistently evil or selfish. Mackey was more engaging and we could at least empathise with his situation, but David Brown offers us no real reason for his sociopathic leanings.
It’s only his genuine concern for the welfare of his daughters – and his physical need for intimacy – that give him any sense of humanity, but part of the problem from a narrative point of view is that if he is the bad guy, who is the good guy? Oren Moverman, whose last collaboration with Harrelson was the highly acclaimed The Messenger, paints a world in which the only sympathetic characters are those on the edge – Robin Wright’s defence lawyer, for example – people who do little to advance the film. The authorities are portrayed as righteously creepy, so however loathsome Brown is, we still want him to come out on top.
It’s a bold and beautifully shot film, with strong performances but a script that fails to take the audience on any kind of emotionally satisfying, logical or meaningful journey.
We watch an inexplicably damaged man sink deeper into his own cesspool, with little hope of or desire for redemption.