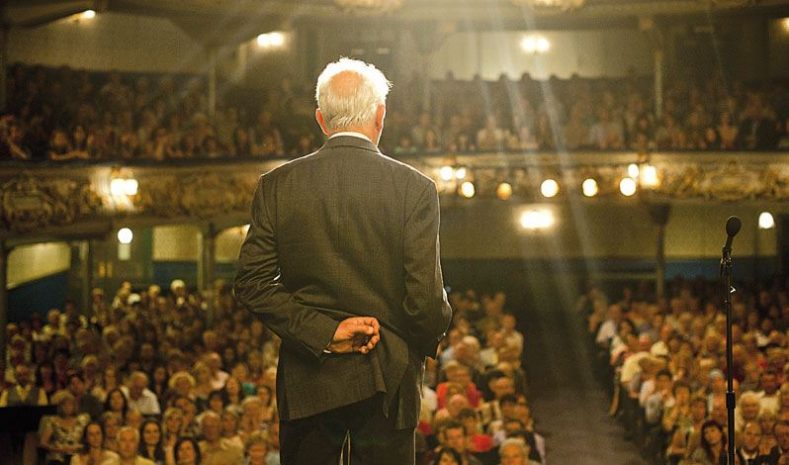 When Marion (Vanessa Redgrave) is told she has terminal cancer, she’s determined to enjoy what she has left of her life.

There’s not much left that gives her pleasure, other than her loving and supportive husband Arthur (Terence Stamp), their loving son James (Christopher Eccleston), his young daughter Jennifer (Orla Hill) and Marion’s own passion for singing in a choir for local pensioners – the one thing that Arthur doesn’t support her in.

When the choir leader Elizabeth (Gemma Arterton) enters the group into a national competition, the excitement seems to give Marion a second wind; grudgingly, Arthur continues to take her to choir practice, until the inevitable happens.

When it does, Arthur cuts himself off from James and becomes a bit of a hermit. But he surprises himself by befriending Elizabeth, at a time that she’s having emotional troubles of her own.

Well, if you’re wondering how the plot reaches its conclusion, the clue is in the title – will the choir get through to the finals without Marion (if they don’t, would there even be a film?)? – and if it does, who will sing this eponymous “song for Marion?” You just get one guess.

The key performances, while effective, are constrained by the fact that he film is largely peopled by stereotypes – from the central couple (a sweet old lady and her cantankerous husband), to the choir members (from the hard of hearing to the difficulty in walking and with skin tones including most colours on the spectrum) to the talented young singing instructor, with a heart of gold and the patience of angels.

Almost every beat of the plot can be felt in advance – the film has the predictability of many of the songs the choir tries, although one conceit of the film – entertaining, if a little Sunday evening TV – is Elizabeth’s somewhat controversial song selections. “Yes, that really IS what she’s singing about,” she warns the giggling pensioners as the classic Salt-n-Pepa hit, “Let’s Talk About Sex,” blares out across the church hall.

Coming from the director of such gritty and chilling fare as London to Brighton, The Cottage and Cherry Tree Lane, Song for Marion seems peculiarly tame – aimed, as it is, firmly at the kind of people featured in the film.

But one consequence of being predictable is that it’s structured so neatly that it presses all the right buttons and plays all the right chords. And despite its formulaic feel, Song for Marion’s so sentimental that it will be hard for anyone with a heart not to feel the tears welling up as it nears the denouement.

By the end, the narrative becomes clunky and contrived, even a little corny, and it’s clear that Paul Andrew Williams is being tremendously manipulative, but what matters is that it works, for what it is and who it’s aimed at.

The film doesn’t flow as well as the tears, but the emotions are honest and well meaning. It’s heart-warming, but rather obvious and, in the circumstance, takes too long to reach its inevitable conclusion.

You might get a little bored and frustrated, but your gran will love it and you’ll both be in floods of tears at least twice.