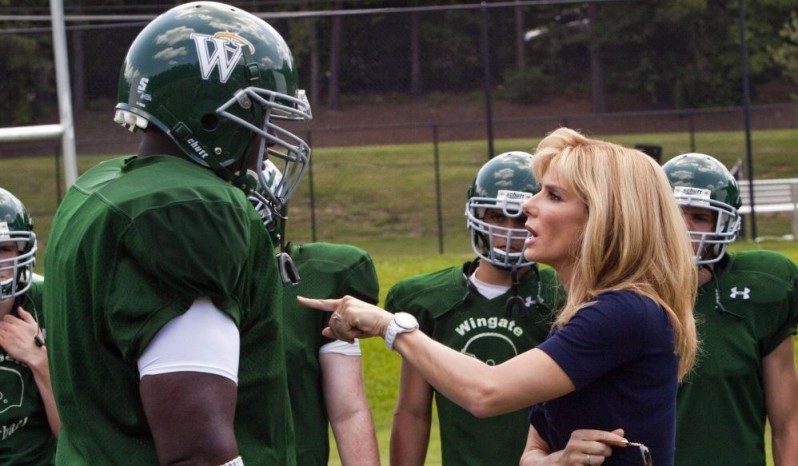 When Burt Cotton (Ray McKinnon), the sports coach of a Christian private school in a bible-belt small-town, discovers an uneducated gentle giant from the projects, Michael Oher (Quinton Aaron), he manages to persuade the school board to offer him a scholarship.

The one condition they set down is that he can’t play sports until his grades are up to scratch, but Michael can’t concentrate in class and can hardly write his name.

Older and different in every way from the kids in his classes, Michael finds it hard to settle in. Only little SJ Tuohy (Jae Head) tries to befriend him, whether through pity, the protection he could offer him from bullies or the attention he’d get from hanging around with such a curiosity.

On the way home one evening, SJ and his saintly and well-to-do family see Michael walking alone in the rain and discover that he has no-where to go. Taking pity on him, SJ’s mother Leigh Anne (Sandra Bullock) offers him the couch (in their palatial home) for the night, but one night becomes a week, then a month – and before long, the Tuohys have become his legal guardians.

Leigh Anne can see Michael’s potential – not just as an American footballer – but as an academic – and as a man.

She’s determined to fight against the prejudices of society – not least her her stuck-up friends – to help him pass his exams (with the help of an eccentric tutor), succeed in sport and build himself the life that she believes he deserves, although fate has previously failed to deliver.

Everyone likes a heart-warming real-life story from time to time, but sometimes, with a little too much warmth, your heart can positively boil over.

In this relentless march of positivism, so much just keeps going right, that on those rare occasions when things are looking dodgy, you might well find yourself praying that the car will crash or they’ll lose the game.

There are a couple of moments when you might even find yourself jumping out of your seat and cheering with celebration at minor tragedy, but even the dramatic turns are cruelly ripped away.

When it’s a real-life story, of course, the film-makers are limited by what actually happened, and while Michael Oher’s story – his rise from the projects to sports superstardom – is unquestionably as fascinating as it is uplifting, it’s simply not dramatic enough to sustain a film of this length.

And the way it’s presented to us, it’s not entirely believable, to the extent that you hear a voice in the back of your head cry “if you saw this in a movie, you wouldn’t believe it.” The job of such a movie, surely, is to make the incredible feel real.

In reality, there must have been drama – surely. Did Leigh Anne’s husband accept Michael? Did SJ’s sister accept Michael? If it was this easy, this was one weird family.

Outside the US, few people will have heard of him, and most of the talk about this film will centre on Sandra Bullock’s Oscar. Few critics will be sour enough to say this was a poor performance, but it is far from spectacular. In fact, when it comes to explaining why a wealthy bible-belt mother should take in a gentle giant, no questions asked, and mother him to success, she fails to convince. So she loves sport and her own son is, in truth, a bit of a weed, but this film provides no answers as to why your average, wealthy, sports-mad, Sarah-Palin-style hockey-mom would pick a random black guy off the street and push him to the top, other than that as a bored house-wife, she doesn’t have anything else to do.

There are satisfying moments when she cocks a snook at her fellow high society women who can’t understand why she’s doing what she’s doing – but in truth, if she seems to be acting out of character to her own friends, we see nothing in this film that explains why she has changed her tune and come over all worthy, patronising or perhaps just selfish.

And we never really discover what Michael’s own dreams are. He wants to get out of the projects and way from the drugs, crime and danger that lurk there, but does he even want to play sports?

The real-life story of Leigh Anne Tuohy and Michael Oher plays like a heart-warming fantasy, rather than a gritty true drama.