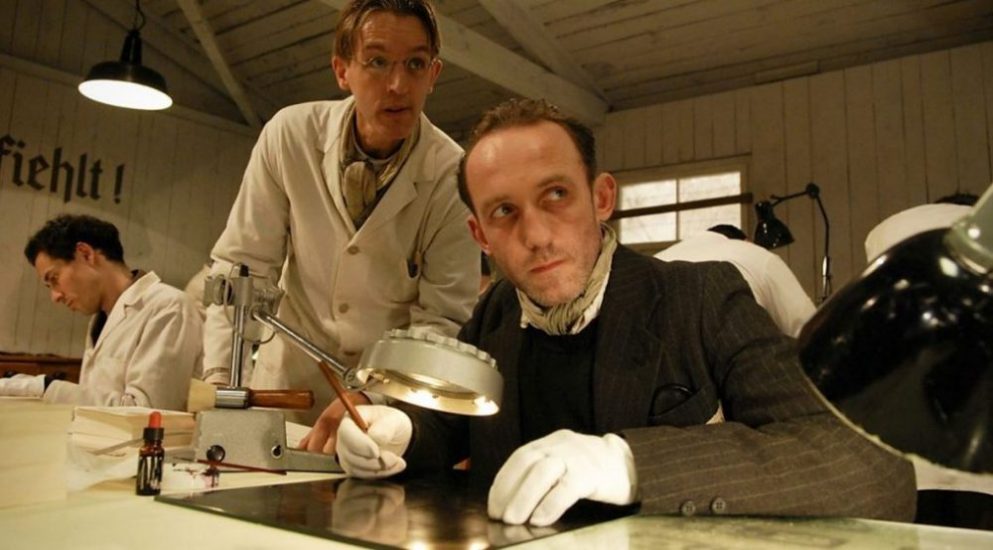 Towards the end of the Second World War, the Germans are struggling and in need of a new weapon.

Concentration camp superintendent Friedrich Herzog (Devid Striesow) remembers that before the war, while he was a policeman, he arrested one of Berlin’s greatest art forgers, Salomon Sorowitsch (Karl Markovics), who’s now being held in a nearby death camp.

Herzog gets Sorowitsch transferred and orders him to head up a secret project to forge pound notes and dollar bills, with a view to damaging the British and American economies.

The team are morally torn – success with the forgery of the currency is providing the German war effort with a much needed boost – but it’s all that’s keeping them alive.

Given that it’s based on a true story, it’s surprising that this is probably the first many people will have heard about it.

This makes it an original take on the holocaust, just when you thought there’d been so many films about it, there can be little new to say.

It has many of the staples of the more traditional concentration camp movie – the fear, the brutality, the sympathetic (or relatively so, at least) camp guard, the inevitable bleakness – but I’ve never seen a currency-forging factory in a shed before.

The rag-tag group of concentration camp inmates fit together well – from the real artists to those who were forging their ability to forge in order to stay alive – leading to tensions among those who knew what they were doing…should they cover and risk their own lives? Then there was the other problem…even if playing along meant survival, was it right to prop up the Nazis in this way?

Perhaps one of the sharpest things about the film is how it presents us with a main character who lacks charm and is really little more than a cantankerous criminal, yet we a rooting for him throughout – a man who was a law-breaker in real life turns out to have perhaps the strongest moral core of the lot, when it comes to the crunch.

It’s clearly low budget, with some decidedly dark and grainy images, but the gloss of a bigger budget would actually not have been particularly appropriate for the subject matter anyway.

The powerful performances bring the drama effectively to life. You feel the fear and paranoia of the inmates at each stage of the operation. Only the ending comes as a bit of a let-down, because it’s more down to the war ending than the decisions of the protagonists coming to fruition.