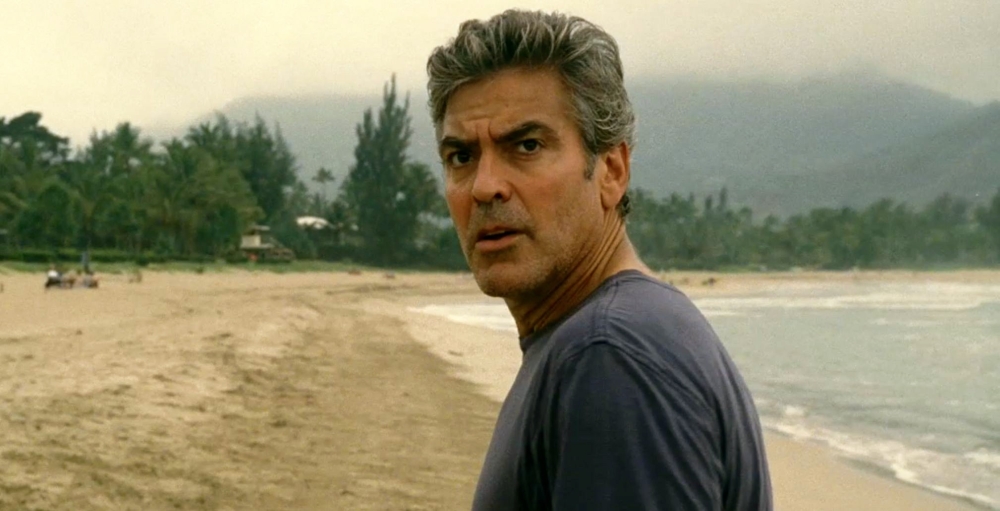 Matt King (George Clooney) lives in Hawaii with his wife and two daughters, Alexandra (Shailene Woodley) and Scottie (Amara Miller).
It might sound idyllic, but he’s a busy lawyer, and on top of everything else, his wealthy family is working on a big property deal. He can’t even remember the last time he had quality time with his daughters.
But when his wife has a watersports accident, Matt has to put his work on the back-burner, step up to the plate and become a father again.
He doesn’t know where to start; thankfully for him, Alexandra is mature enough to take the lead. But she’s also mature enough to be forthright.
When his wife’s prognosis takes a turn for the worst, Alexandra shocks Matt with a revelation about his marriage that colours his view of the past and makes him reassess his future.

Since Alexander Payne made his name with the darkly comic school satire Election in 1999, his output has been as sparse as it’s been impressive, following up with About Schmidt in 2002 and Sideways, two years later, which won him a Best Adapted Screenplay Oscar.
Almost seven years to the day since Paul Giamatti and Thomas Haden Church began their wine-tasting road-trip, Payne is back again with another slew of Oscar nominations.
He didn’t set out to make a comedy or a drama, but like his previous films, The Descendants is a bitter-sweet blend of profound drama and comic moments that hover between surreality and banality.
A twist, midway through the film, sends it off in an unexpected direction, but a rather more formulaic and less interesting one than its initial trajectory. A father struggling to reconnect with his daughters because of a family tragedy provides a moving backdrop for a powerful drama; throwing in the twist – which is revealed in the trailer, but I’ll leave you to discover it for yourself – turns the film more into a mystery movie with an unsatisfactory resolution, although it does set up some effective emotional encounters.
Payne and his co-writers lead their story suitably between their protagonist’s family troubles and the ongoing difficulties of his business deal – it’s perhaps disappointing that the source material decides to tie the two together, as if no film can contain strands that don’t connect. Real life does, and that doesn’t make it any less neat.
George Clooney has already started to collect trophies for his moving lead performance and has to be a hot favourite to pick up the Academy Award next month. But in an ever-burgeoning career of outstanding, grown-up performances – not least in his own Ides of March, this particular turn doesn’t feel like the one that should give him a best leading actor Oscar to put alongside the supporting trophy he earned for Syriana.
Payne himself is also adding to his trophy cabinet, for writing and directing, both of which are exemplary here – but not phenomenal.
The Descendants is certainly one of the main contenders in this year’s awards season, but it seems to be more of a case of the momentum just happening to go its way, rather than it truly being the best of the bunch. Don’t get me wrong, though – it is admirable and highly entertaining – it’s just not the ground-breaking, world-beating film that the accolades might suggest.
It’s been a long wait since Sideways and it was certainly worth the wait, but its not as accomplished a piece of work and has less original to say about life and relationships.