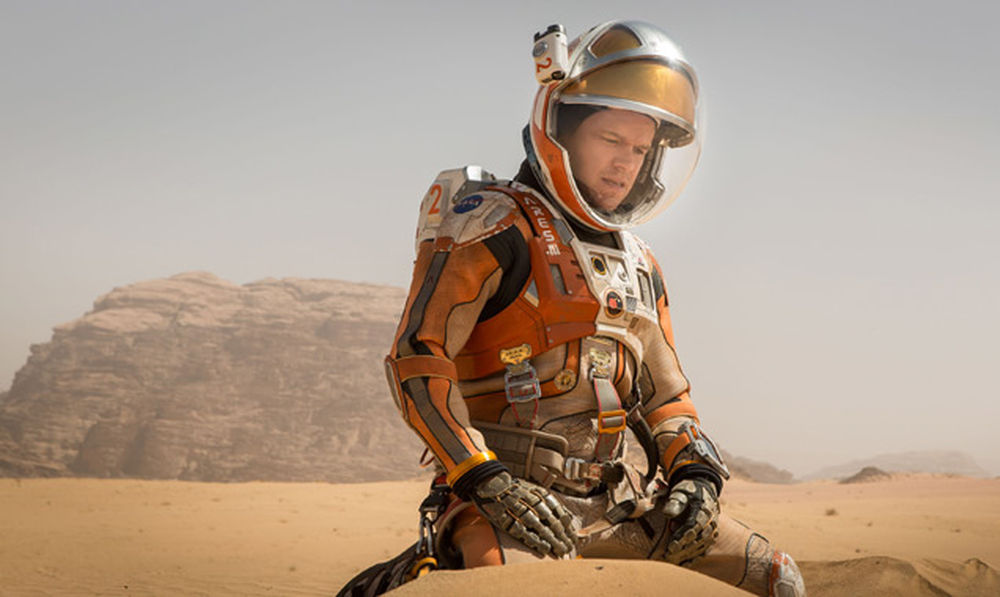 NASA’s ARES 3 mission to Mars is halted abruptly by a strong storm. Commander Lewis (Jessica Chastain) leads her team back to the escape craft, but one of them, Mark Watney (Matt Damon), is hit by debris on the way and doesn’t make it. Trying to save him would kill them all, so they leave without him.

When the storm clears, left for dead, Watney wakes up, wounded, but with enough strength to get back to the base and enough skill to treat his wounds. But now what? Stuck alone, on a hostile planet, a hundred and forty million miles from home, without enough food to last until a rescue mission could arrive – but what rescue mission? Everyone thinks he’s dead and he has no means of communication. He might as well just give up, right?

This is Matt Damon, we’re talking about, and he doesn’t give up. Watney sets about solving problem after problem as he tries to create water, grow food, extend the battery life on his rover and work out how to get to the planned landing site of NASA’s next mission on Mars, four years and two thousand miles away.

As the days go by and he starts to make progress, a young satellite operator (Mackenzie Davis) at NASA notices movement on Mars, prompting urgent debate between NASA’s director (Jeff Daniels), head of Mars missions (Chiwetel Ejiofor), the crew’s boss (Sean Bean) and NASA’s press chief (Kristen Wiig) about how to tell the world that they’d left a man for dead – and whether it’s humanly possibly to rescue him.

Sir Ridley Scott and his team have achieved the remarkable feat of delivering a hugely enjoyable film with almost no original ingredients.

Sir Ridley himself has done the space epic in Alien and more recently Prometheus. Matt Damon himself was stranded on a remote world as recently as last year’s Interstellar. We’ve had people alone in space (Moon), space missions not going to plan (Apollo 13 and Gravity) and even visited Mars many times (The Last Days On Mars, Red Planet and Mission to Mars, which even involves a rescue).

What makes The Martian different from its predecessors is its tone – even though it’s about a man stranded alone, millions of miles from home, with no realistic prospect of survival, it’s surprisingly upbeat, from Matt Damon’s often cheeky video diary to the interplay between the geeks back down on earth.

And unlike many of those films that have gone before, such as Interstellar or Red Planet, there’s no subtext of a dying planet Earth underpinning the exploration, making the original mission just that little bit less worthy.

At the heart of The Martian is Mark Watney’s resourcefulness; while he humorously professes to be the best botanist on the planet, as you’d expect from such a cosmic adventurer, he seems to be similarly skilled in all aspects of medicine, chemistry, engineering, physics, computing and communication, so that we can enjoy watching him solve puzzle after puzzle in his efforts first to survive, then to make contact with Earth and finally in his efforts to get home.

The science itself isn’t always convincing, and much of the “silly science” is explained away through the odd lined of expositional dialogue. But among the narratively convenient details are issues with the radio communication; during the original mission, the base would presumably have been in contact with Earth, but for dramatic reasons, this capacity is lost once the other astronauts leave – when Watney manages to set up a communication system, he can’t send the kind of recorded videos we share many times a day with Whatsapp, and the like, but he can do live transmissions via a probe being controlled from earth – when it suits the plot, such communication is instantaneous, but at other times, it takes several minutes for the signal to travel in each direction.

Some of the story-telling feels clumsy, with Watney’s solitude requiring him to talk to himself – or his computer – in order for us to know what he’s doing or why. While the humour that comes from his attitude is warm and welcome, many of the gags – such as his opinion of the only music available to him – are overdone – and one might wonder why, if music is so important to him, he didn’t have any of his own up there with him. The passing of time is also somewhat clunky – for weeks, he looks the same, but then – to tell us a few months have passed and he’s low on food, for one scene, he’s lost weight and has a beard. Then, when he finally hears a human voice for the first time in months, this goes completely unacknowledged.

The Martian doesn’t have the depth of many of the films in its genre, although it could be argued that this allows you to sit back and just enjoy a less taxing journey. But the journey itself is oddly lacking in drama – partly because nature is out of the control of any of the characters, partly because science is so precisely predictable that they largely know what will happen in advance and, as such, once Watney has managed to secure his medium-term survival, all of the plot-changing events unroll through people talking to each other back on earth.

Audiences like a villain to scream at, but there’s no point getting angry with bad Martian weather system. The closest we get to a bad guy is Jeff Daniels’ director of NASA, but rather than being all “it’s too expensive, think of the bigger picture, we have to leave him,” from the outset, even he supports the idea of a rescue and is worried only about how it’ll damage NASA’s reputation if they fail. And to this end, Kristen Wiig’s character seems either under-used or irrelevant – either way, it’s a waste of a talented comic actress.

There are always difficulties for reviewers when criticising certain details of the plot of a film that’s taken from a book, because the comments would better be directed at the author than the director. But Sir Ridley and his team have chosen this book to adapt and have done a worthy job with the material at their disposal. There are, of course, also limitations when it comes to squeezing entire books into a feature-length film or coming up with appropriate cinematic language to get across the thoughts of a character.

It almost seems like  post-script to remark that the computer generated 3D visuals are impressive, but as has now become the case, for modern-day cinema-goers, such effects are taken for granted, which is a shame for the technicians who no longer get the praise they deserve.

The Martian is highly entertaining, constantly engaging and tremendously tense, but it lacks the depth and drama we’ve come to expect from the genre and it feels oddly imbalanced, with one man alone on Mars and far too many other characters fighting for what little screen time is left for them.