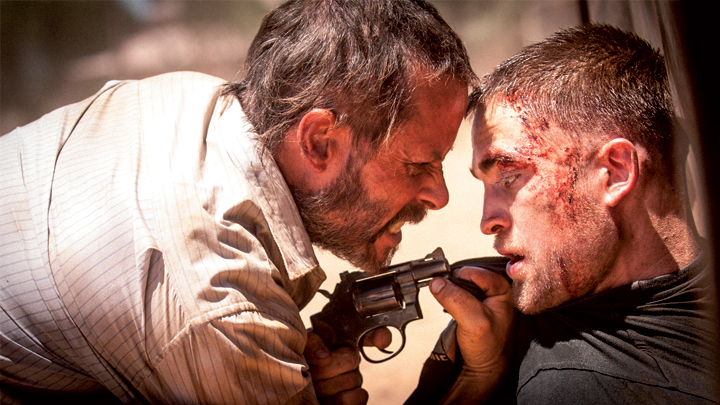 Eric (Guy Pearce) is having a bad day. In fact, it’s been a rather bad ten years, since the global economic collapse, but today is a particularly rough day. While he’s drowning his sorrows in a remote, Australian outback bar, a crash can be heard outside. He rushes out to see a gang breaking into his car and speeding off.

This gang has just carried out an armed robbery and in their haste to get away, one of them, Rey (Robert Pattinson), has been left for dead. Only his brother Henry (Scoot McNairy) has any qualms about this.

Eric manages to start the gang’s crashed car and begins to chase his own vehicle across the outback.

Town after town is almost abandoned, with only a handful of inhabitants, guarding what possessions they have left with an array of weapons. Eric can mostly hold his own, but every now and then, he finds himself on the wrong side of the local law.

At one stop, he encounters Rey and discovering his connection to the gang, he forces him to take him to his brother. Rey has split loyalties, as he’s not happy about having been left for dead, but he doesn’t want to lead this gun-toting maniac, hell-bent on revenge, to his brother’s doorstep. But Eric will stop at nothing to get his car back.

Following up his highly acclaimed Animal Kingdom, David Michôd is back among the Australian lowlife. This time, he takes us to a near-future outback, inhabited mostly by rednecks and immigrant miners from Asia and the US.

The barren landscapes underline the hopelessness of such an existence. There is nothing for anyone here and what little people have, they guard closely. Hence Eric’s single-minded determination to get his car back – or does he have a deeper motivation?

The Rover becomes an unlikely road-movie rather than any kind of buddy movie, because Eric and Rey are far from buddies. But their goals are entwined and they’re dependent on each other.

A grimacing Guy Pearce, comfortable – for once – in his native Australian accent – is strong central character that you will want to root for, although he couldn’t be described in any sense as sympathetic. Robert Pattinson successfully takes another step away from the Twilight character that made his name, with a slightly over-acted tick-ridden simpleton but he will also win over audiences.

With touches of Mad Max and Duel among the influences, The Rover is an exciting chase through unforgiving territory with unremitting violence that makes its 15 certificate surprising, although, as I’ve discussed in previous reviews, it seems that if you have no sex or drugs, you can be as violent as you like.

There is much to enjoy in this brooding well-paced thriller, but its narrative is somewhat simplistic, too many of the supporting characters are stereotypes and the denouement is a bit of a disappointment.