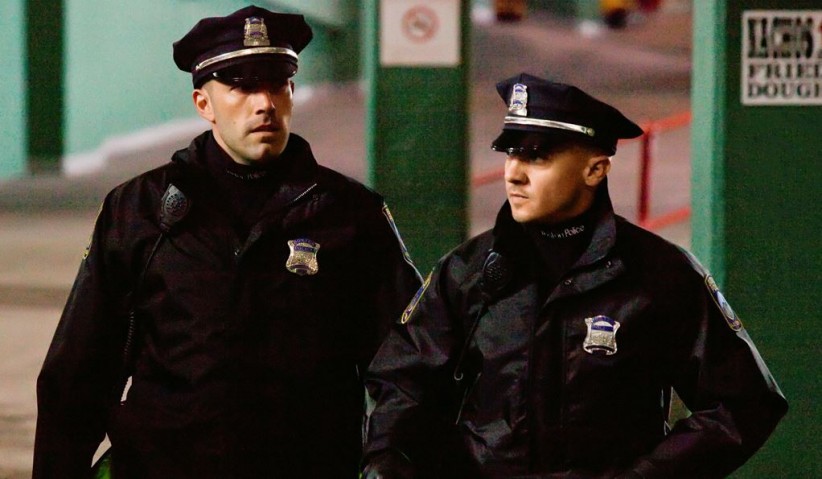 More bank robbers come from the Boston suburb of Charlestown than anywhere else in the US. One of them, Doug MacRay (Ben Affleck) leads a gang of four, including the hot-headed James Coughlin (Jeremy Renner), the closest person he’s ever had to a brother.

With his father (Chris Cooper) inside for a long stretch and his mother long since gone from his life, Doug never really had much of a chance of breaking out of the cycle of crime he was born into and grew up with.

Since his only hope of escape – a budding future as an ice hockey player – ground to a halt, his live has pretty much revolved around James, from his emotionless relationship with James’s sister Krista (Blake Lively) to the heists the pair pull off for the local crime-boss, James’ uncle Fergus (Pete Postlethwaite).

But one masked raid changes everything; James takes the bank manager Claire (Rebecca Hall) hostage as they make their escape and after they let her go, they discover that she lives in their neighbourhood.

James wants to “get rid of the problem,” but Doug steps forward to resolve the situation in a more subtle way, and chats her up in the launderette to find out how much she knows.

There’s an unexpected spark between them and soon Doug falls for her. It’s real. For both of them.

She’s seeking the emotional support from her new boyfriend as FBI Agent Frawley (Jon Hamm) bombards her with questions, while he’s worrying about what James is going to say about him not only failing to eliminate the problem, but falling in love with her.

But when Fergus threatens Claire’s life if Doug doesn’t do one last job, everything comes to a head.

Who’d have thought? The actor whose career got off to a flying start – and a screenplay Oscar – with Good Will Hunting, before collapsing through the embarrassment of such box-office flops as Gigli, has finally turned things around by turning himself into an unexpectedly competent director.

Following up the gripping drama of Gone Baby Gone with another Boston-set thriller, Ben Affleck is continuing to show a real flair. Give good actors a script and the director can’t really go too far wrong, but to shoot an action sequence, a director needs to see the world from different view-points and know how best to string them together – and from bank-jobs to car crashes and cops-and-robbers shoot outs, Affleck deftly handles his camera, actors, props and locations.

The set pieces are as gripping as you would expect from Michael Mann or even Martin Scorsese.

But there’s more to a film than its action sequences, and while there’s a pained love-story at the heart of this tragic story, it’s not a particularly original one, and while there’s a tortured good guy desperate to burst out of our anti-hero, that’s nothing new in cinema either – and this film doesn’t really have too much to add there, either.

The subject matter is clearly something that’s close to Affleck’s heart, but disaffected members of the working classes, who are good at heart and struggling to break away from the path of violence life has led them down, we’ve seen it all before.

Even the building blocks of the plot – secrets, forbidden love and betrayal – aren’t fresh, so the story feels a little tired. And while the jobs are technically proficient, apart from the big finale, they’re not particularly cinematic – and even the car chases – while effective – are sub-Bourne – sorry to bring up your buddy Matt Damon, Ben.

As an actor, Affleck acquits himself well, but I guess he knew what the director wanted. Oddly, he seems to be looking and sounding more like his younger brother Casey these days.

But while his character is interesting, complex and sympathetic, few others are.

Dramatically, too many of the minor characters are skimmed over – Doug leads a gang of four, but two of them say almost nothing for the whole film – and Jeremy Renner, while a powerful presence, seems unnecessarily one-dimensional.

Rebecca Hall’s behaviour becomes frustratingly inconsistent towards the end and John Hamm – while effective in perhaps his best big-screen role to date – is a difficult character to warm to. Although as the FBI, he’s the good-guy, he’s trying to catch our “hero” and he has none of the cheeky charm we’re used to seeing him bristle with in TV’s Mad Men. Well done to him for trying to shake off his typecasting, but he really needs his own vehicle to do this successfully, rather than playing fourth fiddle.

The Town has ambition, but like the ambition of its characters, the film is held back – largely by too many stereotypical supporting characters, familiar themes, convenient cliches and unbelievable twists and turns.

Most of the problems, then, are with the source material, rather than the film-makers – so if you’re happy not to think too critically about such things, Affleck’s growing presence as a director delivers a gripping, claustrophobic thriller in the vein of some 1970s classic crime capers. But it could – and should – have been better, on an emotional level – because at its heart, it’s trying to be a love story.