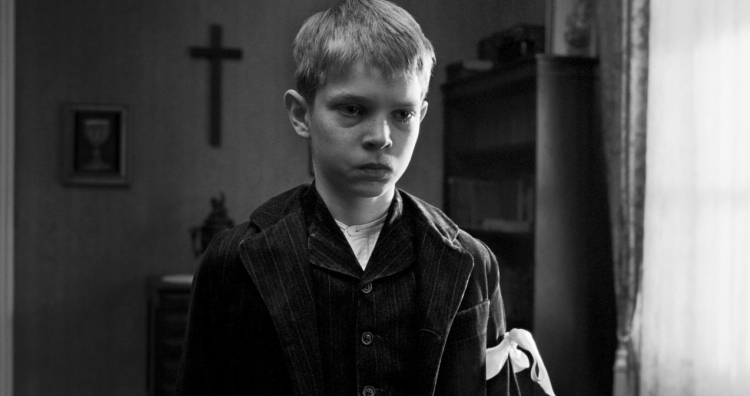 Set in a small town in Germany, in the run-up to the First World War, Michael Haneke’s Palme d’Or winning latest portrays a devoutly religious community in which the children don’t seem to take too kindly to the authoritative attitudes of their parents.
When we first arrive in town, the doctor’s horse is felled by a trip-wire between two trees, sending him flying and leaving him incapacitated for a while.
Round about the same time, a woman is killed on the edge of town, a barn is set alight and the son of the local aristocrat is brutally abused.
Police are drafted in from the city to investigate who was to blame. They never really find out and neither do we, for sure, but as the events unfold and war draws closer, we’re left with a discomforting sense of unease about the behaviour of the children and how it relates to the stern, loveless and overbearing adults.

With the film delivered in austere black and white, we’re very much outsiders from the start.
We’re never really welcomed into Haneke’s world.
His frugal direction – long static shots, while much of the action takes place off screen – further serves to keep the audience at arms length.
This kind of town doesn’t like strangers – it finds it hard enough to deal with locals.
Although we’re never certain whether the children are responsible for the crimes, through some kind of pack-mentality or rebellion against authority, we do feel the hypocrisy of the adults who preach worthiness and purity while having extra-marital affairs, being cruel to each other and brutalising or humiliating their children; the white ribbon of the title is an armband they’re forced to wear to remind them of their orders to behave with honour.
The film provides a fascinating insight into Germanic life in the early 1900s – the way religion was regarded above all else, even the hypocrisy it spawned.
Some have suggested – although Haneke has denied – that the inference is that these children grew up to be the Nazi generation of the 1930s, because of the lessons learned from their parents – or their attempts to rebel against them.
For aficionados of cinema, there is much to enjoy – in the pensive and deliberate direction and the complex multilayered themes.
But for anyone who wants a story or a clear message, nearly two and a half hours of very little happening in black and white will be one of the least satisfying cinematic experiences of the year. Haneke’s controversial style slows the film down even more that the material already does.
Like his previous Cannes winner (for Best Director) Hidden, Haneke sets up questions and mysteries and fails – or refuses – to provide answers. He wears this pretention with a badge of honour, almost mocking anyone who seeks the answers, saying they’ve misunderstood his intentions.
It’s arguably a supercilious attitude to film-making, when so many directors are able to tell intelligent stories with powerful messages, while challenging the audience and moving viewers deeply, without sacrificing their artistic dignity.
There is an audience for Michael Haneke’s artier side, but it’s small and mostly consists of high-brow critics.
Don’t be misled by four and five star ratings.
If you like beautiful black and white photography, go to a Cartier Bresson exhibition. If you want to be genuinely frightened by children, there are any number of films from the Village of the Damned, through the Omen to last year’s The Children which can fill you with an unnerving sense of dread. All this really adds that makes it stand out is its early 1900s Germany setting, which Haneke himself insists is a coincidental red-herring.
If you appreciate being toyed with and leaving the cinema after two and a half hours, feeling confused and irritated but otherwise unmoved, you’ll be impressed with this work. But if you prefer to feel that you’ve learned something about the world – and perhaps yourself – for the time you’ve invested, this isn’t for you.