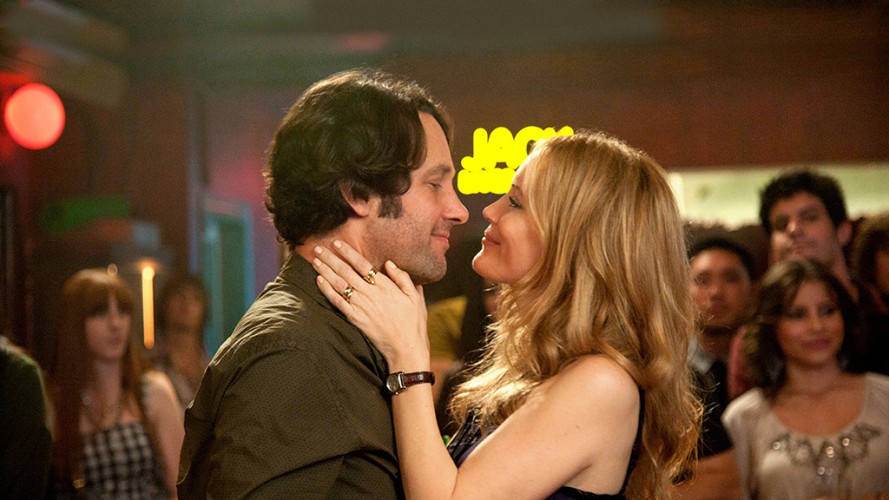 Last time we met Debbie (Leslie Mann) and Pete (Paul Rudd), they were Kathryn Heigl’s sister and brother-in-law in Judd Apatow’s genre-pushing rom-com Knocked Up, by turns reassuring and frightening the younger couple about all aspects of relationships and babies.

Five years later and Debbie and Pete’s own marriage is teetering on the brink.

Pete’s record label is struggling, so he’s finding it hard to make the payments on the family home. Despite this, he’s been lending – well, giving – money to his father (Albert Brooks), which only adds to Debbie’s frustration from discovering that one of her employees at her clothes shop has been stealing the takings. She also has issues with her own absentee father (John Lithgow).

Their daughters, being five years older than when we last met them, are also more demanding.

The last thing they need when life is so stressful is to be reminded of their advancing years, but within a couple of days of each other, they’re about to turn 40, and a big party is planned, so that everyone they know can rub it in.

Hang on – this isn’t sounding like a comedy, is it?

This is 40 is billing itself as the “sort-of” sequel to Knocked Up. Even “sort of” is a bit generous – yes, the central characters were prominent in the earlier film, but the main characters of Knocked Up are completely absent from this one. Can it really be that Ben and Alison wouldn’t, at the very least, have been invited to this huge party? If not, should there not have been a throwaway line about how the sisters don’t talk anymore? Or perhaps it’s just Judd Apatow and Kathryn Heigl who aren’t talking anymore, after she perhaps ungraciously suggested that the movie that gave her a film career was misogynistic. Apart from Pete, Debbie and their kids, the only other characters to make it into this “sort-of” sequel are Ben’s stoner friend turned Debbie’s personal trainer Jason (Jason Segel), fellow stoner turned Debbie’s employee Jodi (Charlyne Yi) and Debbie’s doctor (Tim Bagley).

In that sense, it would perhaps be better to view this as a film in its own right – in its own world – a film about a family struggling with money, their kids and their parents. It doesn’t need to be any kind of sequel at all.

For what it is, the performances from Paul Rudd and Leslie Mann are certainly enjoyable, but in many ways, not particularly different from last time we met them – we don’t particularly learn much more about them than we already knew; they’re married, they have two daughters, he’s a music snob who likes to get away from the stresses of his family from time to time.

The way their relationship progresses is also neither revealing nor surprising – financial difficulties, arguments about the in-laws and even discussions about improving their diets are not especially unusual, some years into a marriage.

The way Apatow throws obstacles in their way seems at times random and certainly contrived, but each incident, by itself, is amusing, which makes the film more of a string of entertaining and effective vignettes about the peculiarities of family life; from him seeking refuge from the family on the loo to his frustration that the women in the household prefer poppy dance music to Alice In Chains, there will be men – and indeed women – all over the world who will recognise the difficulties that life can throw at you and the efforts you have to go through to get past them.

The enjoyment comes from the recognition of these situations – and often the banality.

While it’s fun, the film has less to say that’s new than you might hope for from Judd Apatow – casting his own wife and children, he’s perhaps telling us more about his own life than about life in general.

And, like so many of his contemporaries these days, he seems to have lost his watch. Two and a half hours is just too long for a romantic comedy – especially one that’s not especially enlightening or engaging.

This is 40 sketches about family – probably about half of them worth watching – a quarter of them necessary to link those together – and the other quarter should have been dispensed with, one or two of them being replaced with at least a mention of Ben and Alison. Having watched and enjoyed Knocked Up, the real thing you want to know from a sequel – sort of or otherwise – is whether THEY make it as a couple. No-one would have left the earlier film and wondered how Pete and Debbie would be getting on, some years down the line.