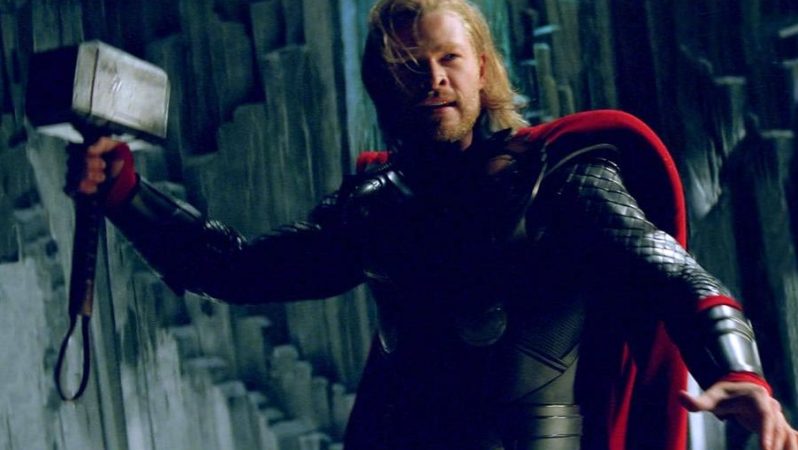 The King of the realm of Asgard, Odin (Sir Anthony Hopkins), is getting old and weak.

The elder of his two sons, Thor (Chris Hemsworth) is being lined up to succeed him, with his loyal younger brother Loki (Tom Hiddleston) at his side.

But after being a little free with his magic hammer in a battle, Thor is banished from Asgard in order to preserve the fragile peace with the neighbouring Frost Giants.

Loki succeeds the ailing Odin and Thor has to settle on Earth, where he’s completely out of his depth.

Without his magic hammer, he’s no stronger than an earthling of the same size, but he is big.

Thor is unfamiliar with the customs and culture on Earth, but fortuitously, he arrives in a country which speaks the same language as Asgard and he runs into a group of scientists who take him under their wing.

Jane (Natalie Portman) and her older mentor Erik (Stellan Skarsgård) are working on a project that’s got the government interested and Agent Coulson (Clark Gregg) confiscates their equipment and research.

When a giant robot is sent down to Earth to kill Thor, he has just one chance to redeem himself and help Jane get the better of the government.

Fans of Marvel comics or followers of Norse folklore will have a head start on this one – for anyone else, there’s an awful lot to learn about realms and kings and hammers and Frost Giants, before you can even begin to think about what’s going on.

Even if you work out the raw ingredients of this casserole, unless you’re already into the legend of Thor in some form, it’s unlikely to excite your palate.

There’s so much lying and double-crossing going on in Asgard and unexplained science and antagonism going on down in New Mexico that there’s not much point trying to follow the plot, as there’s little in the way of logical consequence to anything that happens. And the flipping between two contemporaneous worlds – a modern-day Earth and an Asgard that’s a peculiar blend of medieval and futuristic – is oddly disorientating.

Hemsworth’s disempowered fish-out-of-water comic hero is fun, but none of his relationships – either in Asgard or on Earth – make much sense and Natalie Portman’s entire enterprise serves as little more than a device to hold Thor’s hand while he waits to return home.

Anyone who sees this – or who saw Portman’s most recent films No Strings Attached and Your Highness – will wonder what on earth the American film Academy was doing giving her an Oscar. Admittedly, Black Swan was a more mature film, but her acting rarely exudes palpable emotions. Brothers in 2009, Garden State five years earlier and the film that launched her career ten years before that, Leon, are perhaps the only films where she has truly connected with her audience.

It’s unsurprising that the producers of this latest comic-book adaptation should chose to release it in 3D. What’s more surprising, perhaps, is their choice of director – our very own Kenneth Branagh, who cut his teeth directing Shakespeare and quite possibly has never seen a 3D film before having to shoot this. He concedes that he had a lot of learning to do – but why not just get a director who’s proven in the genre.

To be fair, Branagh does as well as can be expected with a confusing script, delivering an energetic and entertaining enough romp, and he doesn’t overdo the 3D – although if you don’t use it that much, is it worth the expense of using it at all?

Many commentators critical of 3D as a medium cite the fact that the technology necessarily makes things look dark, which makes it a particularly curious choice for this film, so much of which is shot in the darkness of Asgard’s night, making your eyes ache even more trying to work out what’s going on.

One other thing to note is that Marvel Studios tends to try to link its films – particularly ahead of the upcoming Avengers film – but only a fleeting mention of Stark, which will go over the heads of anyone who’s missed out on Iron Man, makes this feel a little left out.