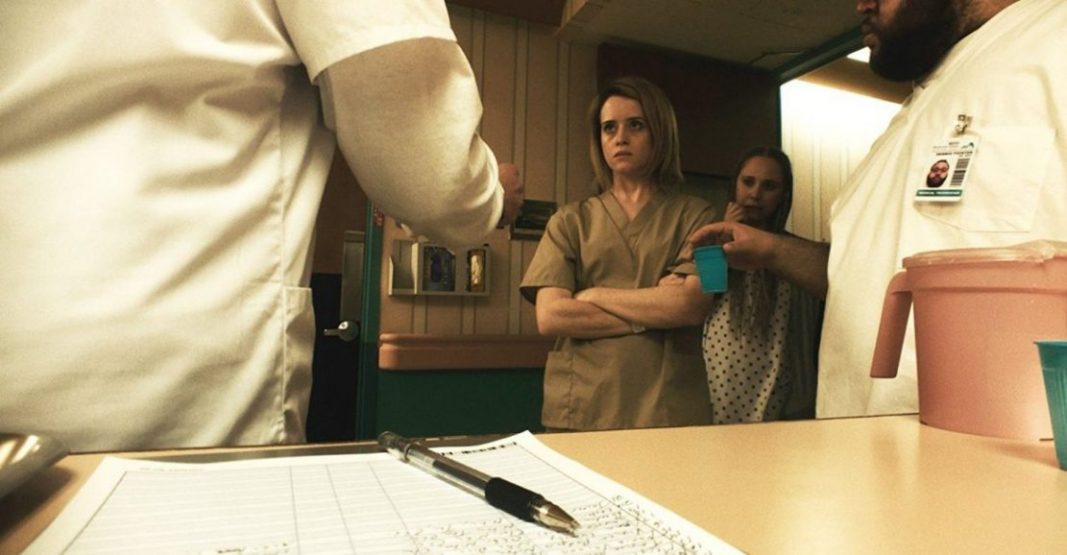 Sawyer (Claire Foy) has recently moved to a new city and started work at a bank. She’s an attractive girl, attracting the attention of the wrong men – including her boss.

She also has a history of not being able to shake-off the wrong men – which is why, so often, she finds herself starting out again in a new city.

After a one-night-stand doesn’t go to plan, she decides to seek help for victims of stalkers and books in for an initial chat with a counsellor – or so she thinks.

The woman turns out to be something far more sinister – and Sawyer finds herself committed in an institution against her will.

Is Sawyer really going mad or do the authorities just not believe her?

Always up for experimental film-making, Steven Soderbergh’s latest gimmick is to follow Tangerine’s Sean Baker into the world of shooting on a mobile phone – in this case, an iPhone 7. On the one hand, it will have reduced the budget and given him the flexibility afforded by a lighter camera, but there are times where it’s so cheap and easy to shoot this way that there are so many different camera angles that the audience can feel a little disorientated.

But perhaps, for a film about mental illness – and the way it’s viewed by the medical profession and society more widely – that’s part of the exercise.

However, I fear that would be giving Soderbergh  too much credit on this occasion, for while the film begins as what appears to be a truly original take on a familiar theme, come the third act, disappointingly it turns into exactly the kind of film I’d earlier been praising him for swerving.

There is a clever, mature and refreshing film that it looked like he was making, apparently providing a fascinating insight into mental illness from the point of view of a protagonist who may or may not be struggling with reality – but that is not ultimately the film we’re being asked to watch – and indeed trust.

The film it becomes is far less interesting, less challenging, less convincing and far enough beneath what one might expect from a director as versatile and accomplished as Soderbergh that the whole project ultimately seems to be more of an exercise in low-budget film-making for the 21st century than the thought-provoking chiller the premise promises.

Claire Foy does her best with the material, although the inconsistency of her character only adds to the mismatched second and third acts. And there’s something disappointingly cheap and unconvincing about having what appears to be a huge hospital that seems to be treating only a handful of patients, only two of whom ever interact with her, most of whom come straight out of the “How to Portray Mental Illness” acting guide and all of whom share the same ward and dining room. Similarly, it’s too broad-brush, with all the nurses, orderlies and officials singing from the same hymn-sheet – being necessarily ambiguous as they straddle the line between diligently caring and slightly creepy, with just a little knowing menace – possibly – thrown in for good measure.

While it’s an ambitious project, purporting to examine the mind through a small cast in minimal locations and shot on a mobile phone, rather than lift the lid on mental illness, it ends up doing it somewhat of a disservice and becoming little more than AN Other slasher movie designed to attack the greed of corporate America.