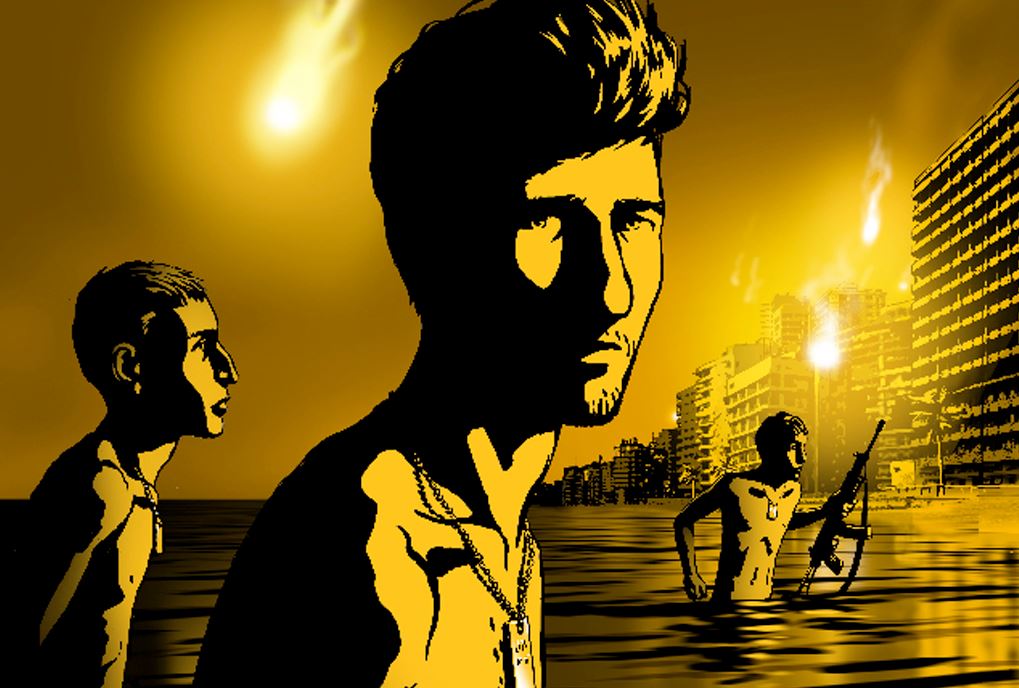 After an old friend, Boaz, tells him about a recurring nightmare where he is chased by 26 snarling dogs, film maker Ari Folman starts having his own nightmare from the Israel’s 1982 war in Lebanon, where he and his friend served. He realises he now has no memory of it.

In the nightmare, he sees himself and his comrades emerge from the dark sea and walk towards Beirut, their faces illuminated by flares in the night sky.

His therapist tells him that he is suffering from post-traumatic stress disorder and that his nightmare is a fragment of the war’s memory that he has repressed.

Forman embarks on a mission to resurrect his lost memory. He interviews nine of his old comrades, who served with him 25 years earlier and from their recollections of events, he slowly starts to reconstruct his own memories of that war, from the moment Israel invaded Lebanon to the culmination of the war in the Sabra and Shatila camp massacre.

This is an animated documentary about the quest of a soldier to find a truth from his own perspective and the perspectives of his old comrades. The director says that he chose the medium of animation to tell his story because it enabled him to depict his dreams faithfully, without the middle-man, namely the actors. It freed him to go from one dimension to another, to move from the subconscious to the conscious, from dreams to memory and hallucination to testimonies. Whatever his reasons were, it would’ve cost him millions to recreate the action scenes in this film.

The problem with this animation is that it abstracts the scenes that haunt Forman and his former comrades, making them less emotionally immediate. Furthermore, the interviews are sometimes choppy, which renders the facial expressions of the interviewees unconvincing.

This leads us to the other problem. Unlike other PTS patients, the emergence of Forman’s fragmented memories don’t startle him; we don’t even see him mentally or physically haunted by them. We just see flashbacks in chronological order of the war in Lebanon, without sensing any emotional consequences on him.

Even when the animation switches to real images of wailing Palestinian women in the aftermath of the Sabra and Shatila massacre, indicating that his hallucinations have finally transformed into reality, Forman watched impassively. There is no reaction or an act of redemption. Although, he admits that he fired the flares into the sky to assist the Christian Phalangists in slaughtering the camps’ inhabitants.

The film, however, shows horrific and disturbing images of an unforgiving war, where many of its casualties are innocent bystanders, who were unfortunate enough to be in the way of the nervous soldiers, who shoot blindly at anything in their sight, sometimes out of uncontrollable fear, at other times, for the sheer pleasure of it.

The film doesn’t offer any new facts about culpability in the Sabra and Shatila Massacre. It shows yet again that the Israeli forces allowed their allies, the Christian Phalangists, to enter the camps and commit their crime, while the Israeli commander watched from command posts. Only after mounting complaints from Israeli soldiers, who witnessed the Phalangists driving Palestinian families out of their homes and then shooting them, did the Israeli commanders order their allies to stop the massacre.

Folman’s trauma, his therapist suggests, stems from Auschwitz. A camp that his family survived when he was 6 years old and now the Palestinian camps have somehow reignited those old traumatic thoughts and memories.

The film was in the official selection in Cannes 2008 and was critically acclaimed. It’s powerful, disturbing and definitely worth watching.