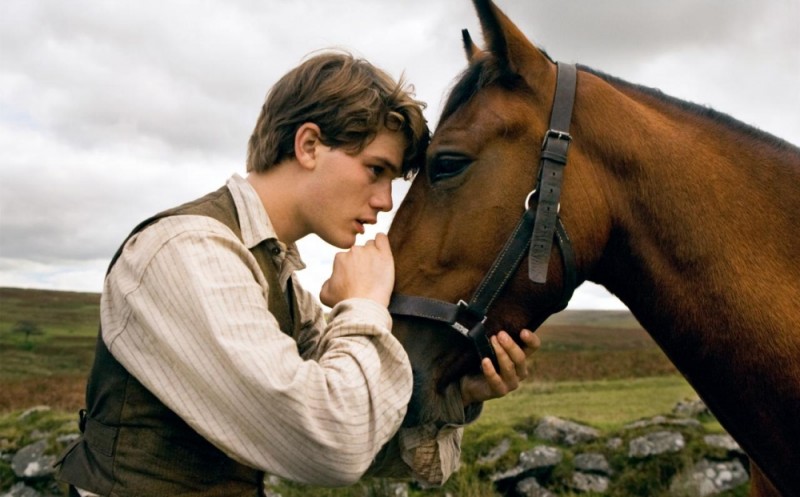 Struggling farmer Ted (Peter Mullan) foolishly spends more than he can afford on a horse that clearly has no prospect of ever being any use to him, but when his teenaged son Albert (Jeremy Irvine) takes a shine to the horse he names Joey, against the odds, the boy manages to train his trusty steed to plough the fields and save the farm.

But this success – and the cross-species friendship – are short-lived, because with the onset of the Great War, Joey is sold to the British cavalry to fight for his country, like so many others of his fellow countrymen – and country-horses.

Over the years that follow, Joey finds himself in the trenches, in the care of an elderly French farmer (Niels Arestrup) and his grand-daughter, under the control of some German soldiers, caught up in fighting – and barbed wire.

All the while, determined to be reunited with Joey, Albert has enlisted in the army and traverses the theatres of war in the hope of finding his horse.

Based on Michael Morpurgo’s children’s book and the stage-play it inspired, Steven Spielberg’s War Horse is the story of – as its name suggests – a horse during the course of a war. A Great War. And, of course, a great horse.

Joey is clearly Spielberg’s metaphor for the pointlessness of war – if we all love horses, despite our different nationalities and political agendas, can’t we all just love each other too?

It’s original – from a cinematic point of view – to tell a story primarily from the point of view of a horse – following Joey on his adventures more than following the human characters, or more generally, the course of the war.

But loveable as he is, it’s harder for audiences to identify with the plight and adventures of a horse than it would be to follow the characters, who – as a result of the story’s structure – are reduced to cogs to wind the plot forward.

British acting talent of the stature of Peter Mullan, Benedict Cumberbatch, Emily Watson, Tom Hiddlestone, Eddie Marsan and many more are reduced to bit-parts while their actions and their consequences are somewhat contrived.

As you’d expect from one of Hollywood’s masters, the film looks and sounds faultless – sweeping camera moves following Joey at peace and at war – raising a smile at peace and tugging on the heart-strings at war – Spielberg is aiming at those tear-ducts from the start and by the end, you’ll either be surrounded by soggy tissues or cursing the manipulative story-telling that contrive – of course – to reunite our equine protagonist with his human counterpart.

There is much to be admired – not least Spielberg’s First World War version of the opening scene of Saving Private Ryan as his cameras track through the trenches during a bloody battle – although this feels like a step backwards, compared with its predecessor.

It also feels a little uncomfortable to have all soldiers of all nationalities speaking to each other – and their enemies – in accented English.

War Horse is a family film that can be enjoyed by all generations, but necessarily that requires that it loses the edge a war film might otherwise have.

Rather than being a savage assault on the futility of war, necessarily it is more of a fairytale about how a plucky lad battles the odds to win back his horse from all-comers, be they armed with bayonets, automatic rifles or gallic guile.

But despite being a rather shallow film masquerading as profound drama, it’s told on a suitably epic scale and it’s stunningly realised.

It’s been a busy year for Spielberg, with this and Tintin coming out in quick succession, but while they’re both creditable films, neither comes close to the exemplary standard set by the master in almost every film he delivered between the late 70s and the early noughties.

It’s an ambitious project on a grand canvas but we’d expect that from Spielberg; he doesn’t get points for that, where fresher talent might. Like so many of the other giants of Hollywood’s recent past who are still working today – the Scorseses, Allens, Coppolas, among others – the stronger your back-catalogue, the harder it is to meet expectations.

Spielberg makes a good go of it here and many of his strongest qualities are evident, but so are many of his weaker habits – it’s too long and drawn out, over-sentimental and frustratingly simplistic.