Bruce Springsteen has cancelled Sunday’s gig in North Carolina, in protest at the new legislation in the state that he argues discriminates against gay and transgender people. The sell-out gig in Greensboro was to have been the next date on his The River tour, which features many of his biggest hits, including Born to Run.

In a statement, released on his website, brucespringsteen.net, he said, “Some things are more important than a rock show and this fight against prejudice and bigotry – which is happening as I write – is one of them.”

The artist’s announcement came a week after North Carolina rushed through a Bill, under which everyone in the state has to use public toilets intended for people of the gender on their birth certificates and it allows employers to overturns local legislation that banned employers from discriminating against certain staff. 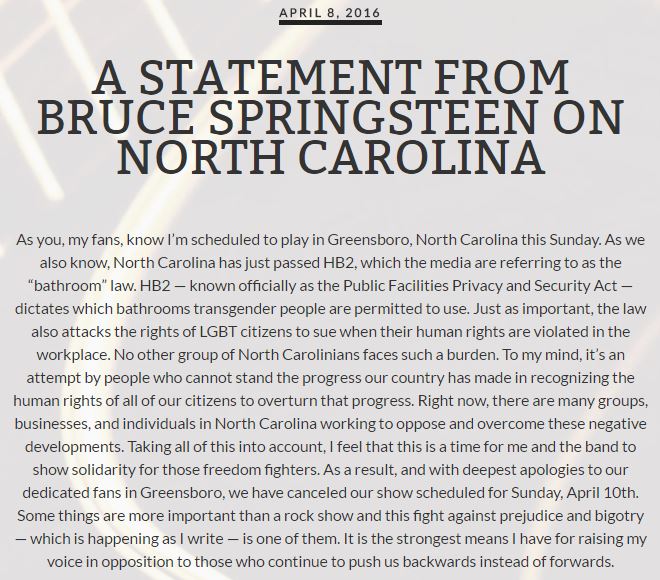 Springsteen says that the Public Facilities Privacy and Security Act, which has been labelled as the “bathroom bill” by activists, is an attempt by people who cannot stand the progress the US has made in recognising the human rights of its citizens to overturn that progress. While he acknowledges that there are groups in the state working to overcome what he calls the “negative developments,” he says he has decided to “show solidarity for those freedom fighters.”

More than 15,000 fans, who had spent between $68 and $150 for their ticket at the Greensboro Coliseum, will receive a refund. The venue itself says it stands to lose about $100,000 from the cancellation, from lost parking and food costs, among other things.

The Greensboro’s Mayor, Nancy Vaughan, said that with half the tickets sold to people from out of town, the cancellation would be bad for the city and Councilwoman Sharon Hightower said several hundred workers would be losing a day’s wages. “This is a huge, devastating economic impact to lower economic people who count on utilizing these types of jobs. It’s serious business. We are impacting people’s lives who did nothing wrong to anybody to deserve this.”

The head of the Republican Party in North Carolina, Dallas Woodhouse, argued that the General Assembly had simply maintained the status quo, after Charlotte City Council introduced legislation that would allow male-to-female transgender people to use women’s toilets. “For years young girls have safely used the restrooms at ACC Tournament games and other events at the Greensboro Coliseum separated from grown men. The legislature and governor simply secured the long-standing common policy of safety and security and privacy,” he insisted.

There’s been a mixed response from fans, many of whom expressed their disappointment at missing out on the concert but supported the singer’s stance. One fan, Nick Melton, wrote, “As a gay man living in NC and a very dedicated Springsteen fan, I am simultaneously extremely happy and extremely disappointed to hear this.” Another remarked that Spingsteen had shown why “he is still The Boss.” High profile supporters have also come out to back Springsteen. The West Wing actor Bradley Whitford tweeted “Thank you Bruce for standing up to bigotry!”

But others disagreed. Another fan, Bob MacReynolds, commented, “For those of us who bought tickets, made plans, got babysitters, and were expecting a good show this doesn’t help the cause you’re writing about one bit. It’s the state lawmakers in Raleigh that you should direct this to, not the fans who have waited months to hear this concert. Bad move Bruce.”