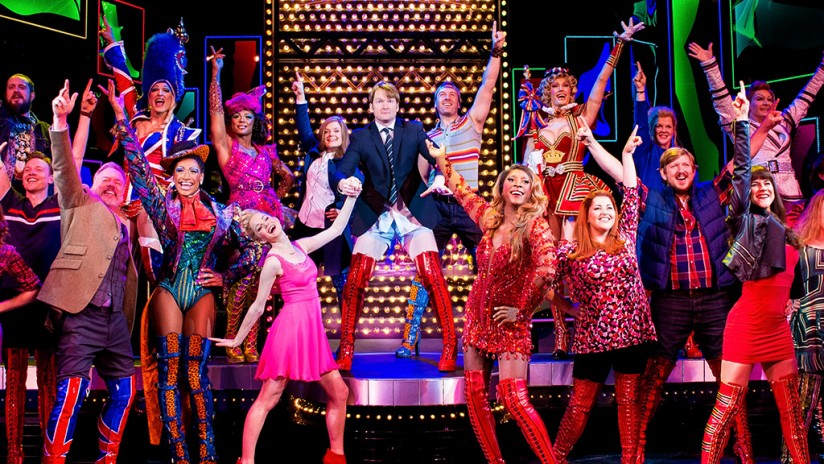 Charlie Price (Killian Donnelly) reluctantly inherits his father’s shoe factory in Northamptonshire, which is on the verge of closing.

After a chance encounter with Lola (Callum Francis), a drag queen, he hits upon an idea to rejuvenate the business and save the jobs of his staff and friends – manufacture gorgeous, glamorous, sexy high-heeled boots.

This is a glorious shot of wonderful entertainment.

From start to finish, the energy never sags – with a cast that give it their glittering, shimmering, shoe-clad all.

Killian Donnelly hits the mark as Charlie Price, the man who takes over the ailing family shoe business with little enthusiasm, but becomes increasingly passionate as he sees a future for himself and the factory.

His bacon, or leather, is saved when he bumps into a drag queen, Lola, played with confident verve by Callum Francis.

The days making bog-standard brogues might be numbered but men in boots could be his company’s salvation.

Charlie talks Lola into spending some time in the Northamptonshire factory to help design kinky boots, which is where the tension begins.

The fish out of water is taunted by the foreman Don (Jamie Baughan), who’s less than happy with the arrival of a man in a frock and interesting footwear.

There’s a spat between Charlie and Lola too.

Both are necessary elements of the musical but are the slightly weaker parts compared with the wonderfully upbeat moments.

Which brings us to the score by pop icon Cyndi Lauper. It’s a triumph, with plenty of punchy, toe-tapping numbers. The score won a well-deserved Tony Award in 2013 and a Grammy for Best Musical Theatre Album the following year.

Special mention must go to Amy Lennox, who plays Charlie’s eventual love interest Lauren, for her barnstorming, rocky, quirky rendition of The History of Wrong Guys.

This was two hours of pure West End entertainment, pumped direct into the veins.