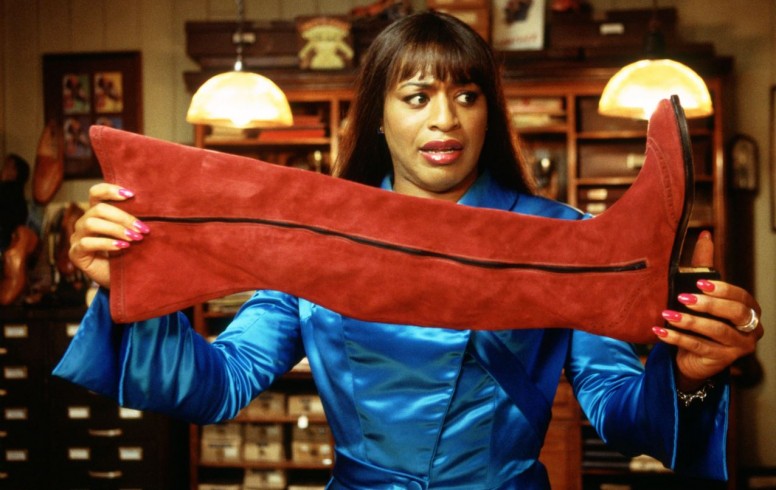 When his father dies, Charlie (Joel Edgerton) is left in charge of his Northampton shoe factory. Taking over means he and his fiancé Nicola (Jemima Rooper) have to give up their dream of leaving the shires and moving to London.

Charlie soon discovers that his father had run the business into the ground and the shoe factory was on its last legs.

One by one, he starts making his staff redundant, until one of them, Lauren (Sarah-Jane Potts), makes him stop and think. He shouldn’t accept defeat – he should come up with ideas to save the factory.

Remembering an accidental encounter with the glamorous Lola (Chiwetel Ejiofor), a six-foot black drag queen, who couldn’t find a comfortable pair of fetish boots to suit a man, Charlie discovers his niche market.

Against the better judgement of his old-fashioned staff and his upwardly mobile fiancé, Charlie decides to throw out the sensible brogues and develop a line of ladies’ boots for men, in time for the year’s most important fashion show – in Milan.

This is the latest in a long line of quaint British fish-out-of-water comedies to tackle the less visible parts of society, whether it’s ballet-dancing miner’s sons or naked Women’s Institute’s members – this is, in fact, the latest offering from the team behind Calendar Girls.

This one hits all the right buttons, taking you on a suitably formulaic, if predictably satisfying ride.

It’ll never surprise you, and the characters all develop in exactly the way you’d expect, but they ooze warmth and likeability and you can’t help but root for them.

As in films like Station Agent, rather than poking fun at the out-of-the-ordinary central characters (in that film a dwarf, in this film, a big, black drag queen), a lot of the humour comes at the expense of the narrow-minded people they meet, who have no idea how to react – in that respect, Nick Frost’s Don is a joy to watch.

It’s one of those unusual films where the main character – here, the factory owner – gets overshadowed by his supporting cast – he’s a necessarily blank canvas, with all the colour provided by Lola.

Ejiofor is a versatile enough actor to pull off this conflicted part with confidence. It’s certainly a brave role for him to take – although transvestism seems to be de rigeur at the moment, with Cillian Murphy’s upcoming “Breakfast On Pluto.”

But while it’s a warm and uplifting character comedy, it’s just not that kinky – even taking the production to Milan doesn’t really make it exciting enough to warrant a big screen outing.