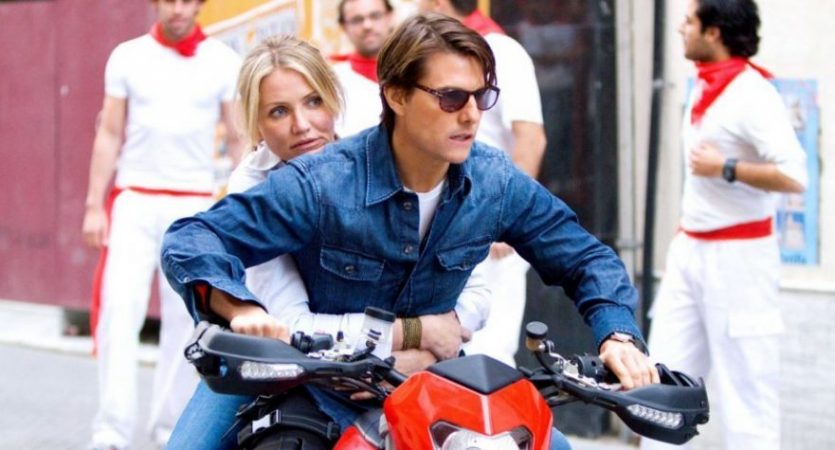 Jane (Cameron Diaz) isn’t your typical movie mechanic. A sexy thirtysomething blonde, she’s on her way back home for her sister’s wedding, having flown halfway across the US to buy a part for a car she’s restoring as a wedding gift.

She keeps bumping into the enigmatic Roy (Tom Cruise) at the airport and even finds herself on the same flight.

Such is the sexual frisson she feels that the romantic in her fails to notice that while she was powdering her nose, he single-handedly killed every other passenger – and indeed crew member – on the plane and has to bring it down safely on his own.

The next thing she knows, she’s waking up in her bed with only a vague recollection of what happened. Or was it just a dream?

Apparently not. While Jane’s ex boyfriend is trying to woo her back, Roy appears and whisks her away for her safety – and for his.

Finding himself squeezed between the CIA and a Spanish drugs gang, Roy can’t have Jane jeopardising his attempts to protect a young inventor (Paul Dano), who’s designed a regenerating power source.

A romantic comedy and thrilling action adventure in equal measure, this ticks all the boxes required to provide a thoroughly entertaining – ahem – Knight out.

The script is unquestionably rather more than a little far-fetched and as contrived as it is formulaic – not least in its clunky title and its disappointing maguffin – but it’s such tremendous fun that it’s easy to throw away any cerebral concerns and enjoy it for the warm and funny confection that it is.

Love isn’t so much blind as forgivable. You can see what it’s doing and why – how it’s trying to manipulate the audience – but it’s so slick that it’s hard to criticise.

In the years to come, this could be held up as an example for screen-writers trying to structure the perfect Hollywood script – you get just enough back-story to make the characters feel real, drip-feeding just enough information at the right pace to keep us interested, setting up recurring gags that pay off with perfection, burying cheeky romance behind action sequences that take our protagonists all over the world, while leaving a trail of destruction on planes, trains and automobiles.

But while mainstream audiences – and so studios – can’t get enough of this kind of film-making by numbers, the more high-brow cinema-goers who will have boasted that they understood Inception on the first watch will be unlikely to admit having got much out of this.

It’s a thrilling, well-paced, good-humoured, tightly scripted, neatly performed, roller-coaster of an action romance – very much in the vein of Mr & Mrs Smith.

With no pretentions, it just sets out to be pure entertainment.

It isn’t seeking awards-season glory – but the on-screen re-union of Tom Cruise and Cameron Diaz won’t do any harm to either of their careers.

Cruise is particularly good fun, as cool and calculated as he is in Collateral or Mission Impossible, but with welcome levity.