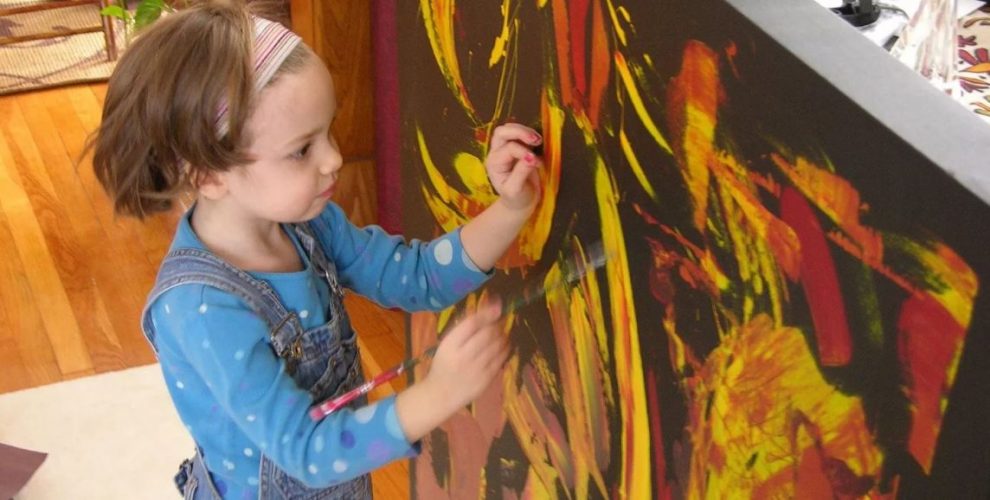 Back in 2004, abstract artist Marla Olmstead was four years old.

In the circumstances, it’s not surprising that she featured prominently in newspapers and magazines and on television, but it was a feature on CBS’s celebrated current affairs show 60 Minutes which cast a cloud over her oeuvre.

Had her father Mark helped her – or even done some of the paintings himself? Once doubts were raised, collectors with Marla’s work hanging on their wall started to ask their own questions.

Throughout all this, documentary-maker Amir Bar-Lev was following Marla and her family, recording their reaction to their sudden change in fortune.

When Amir Bar-Lev started following Marla and her family, it was just another one of those interesting stories about an interesting character, but as a potential scandal erupted right in front of his camera, he was onto a scoop. What begins as a story about a four year old girl turns into a story that’s more about her parents.

While the rest of the media started questioning the integrity of the Olmsteads, Bar-Lev did his best to stay as neutral as he could, but letting the facts speak for themselves inevitably turned the family against him too. Although they attended this film’s preview at Sundance, they weren’t happy with the final product.

It was perhaps ironic that despite the film’s raising doubts about the provenance of the paintings, the Sundance screening actually increased their selling prices – among the controversy collectors, rather than the art collectors, at least.

Perhaps the film’s weakness is that even after a year with Marla and her parents, Bar-Lev doesn’t really have a definitive answer. “She’s not the next Mozart, but her parents aren’t arch criminals” was how he put it, at the London Film Festival screening of this documentary. He concluded that “most of us live in the grey area.”

Like the CBS film crew, Bar-Lev tried to film Marla painting one of her celebrated works from start to finish – and like the CBS crew, he certainly didn’t get what he was expecting. But he chose not to present this documentary as the kind of expose put forward by CBS. Arguably, in this sense, Bar-Lev pulls his journalistic punches, but he insists that “while it’s important to try to get to the bottom of the mystery, it’s more important to remain humane.”

This is manifested in the way that when he starts to have his own doubts about his subjects, he continues to treat them with respect, but he does make rather too much of a feature of his own confusion. The film could be about Marla or possibly about her parents, but it shouldn’t be a film about him.

Like other successful documentaries (such as Capturing the Friedmans), what makes “My Kid Could Paint That” work so well is a real controversy that developed AFTER the shoot began, which changed the story that was being told and took all the characters unexpectedly out of their comfort zones.

Its weakness – but also its charm – is that it stops short of demanding a conclusion, although not far short.

As a piece of film-making, it also raises interesting questions about the nature of art, embarrassing some leading critics by getting them to comment on the paintings before revealing that the artist is a child. Ultimately, Bar-Lev wonders, is it a different painting if her Dad DID help?

It’s a warm and entertaining piece of low-budget story-telling that doesn’t quite get to the bottom of the story it’s trying to tell.