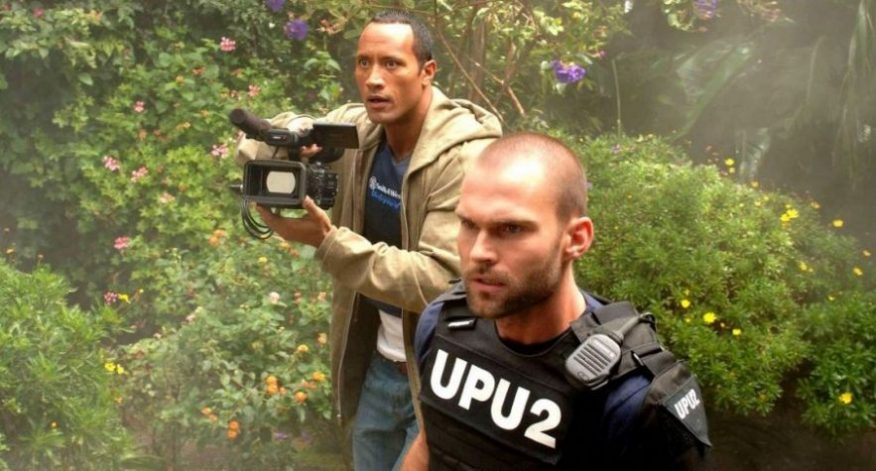 Much of middle America has been destroyed by a nuclear attack and the government’s taking advantage of the resulting paranoia by clamping down on pretty much everything.

It’s all go in Los Angeles though – Hollywood action star Boxer Santaros (Dwayne Johnson), who’s just reappeared after suffering a bout of amnesia, is trying to get a movie project off the ground – porn-star Krysta Now (Sarah Michelle Gellar) is trying to reinvent herself as a reality TV show host – police officer Roland Taverner (Seann William Scott) has been kidnapped by Neo-Marxist terrorists who are planning an attack on the authorities – or is it Ronald – well, whichever it is, the other one, his twin brother, is sent out in his place as a decoy.

Then there are some dodgy characters standing in the upcoming elections – and a German company, which has found a way to use sea-water to generate power, is being stopped from marketing its ground-breaking methods.

How does all this tie together? Even after two and a half hours, you won’t have a clue.

There are many interesting ideas – and many derivative ones – but rather than linking everything together in an intelligent, thought-provoking and seamless way, this film is a clumsy clashing of themes, images, awkwardly plotted and told through the clunky dialogue of cheesy, knowing performances.

It’s tough to tell to what extent Kelly’s tongue is in his cheek and to what extent he’s taking himself horribly seriously – it’s clear that he has something to say about modern-day America – it’s just not at all clear what that is.

Perhaps the most frustrating thing for the viewer is that it takes a full two and a half hours to discover that every minute has been wasted – at least you don’t feel quite so cheated if a dreadfully unsatisfying film is at least a sensible length.

I guess the best that could be said of it is that the length is at least a little more sensible than its original running time in Cannes, last year, when with an extra quarter of an hour, it was one of the worst received films on the Croisette since Vincent Gallo’s Brown Bunny in 2003.