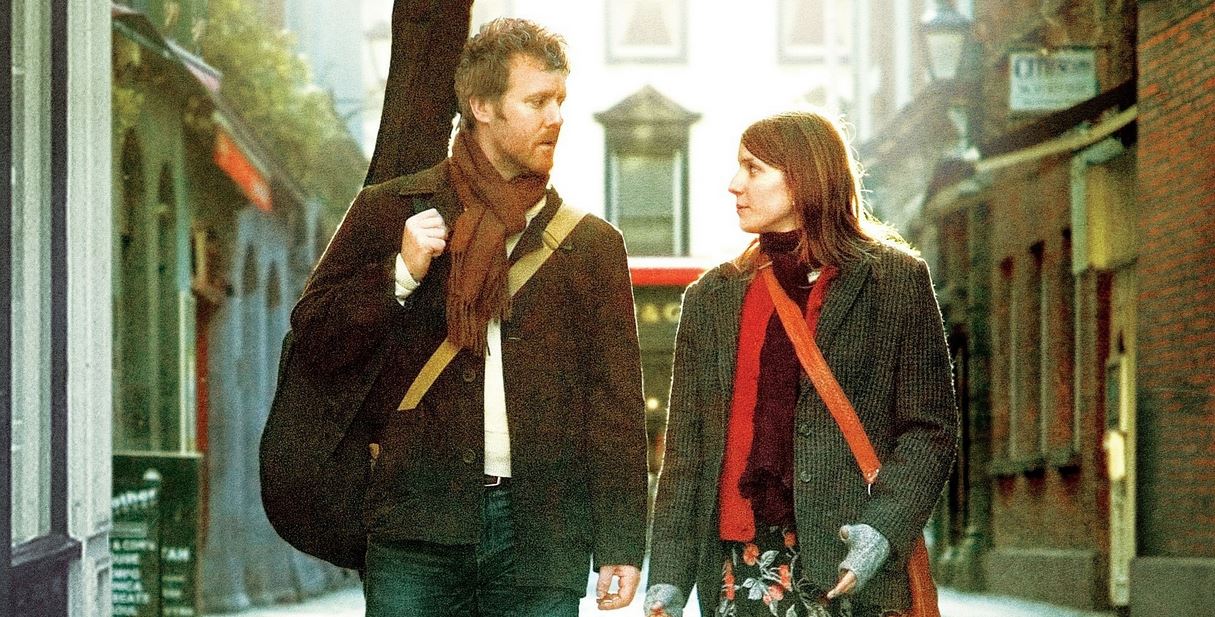 This is the tale of a guy (Glen Hansard) and a girl (Markéta Irglová), who meet on the streets of Dublin.
He’s a vacuum-cleaner repairer, who gets his kicks from busking by night.
She’s a musically-talented Czech immigrant, whose vacuum-cleaner needs repairing.
Such unlikely scenarios might be the thing of musicals – and this is indeed a musical – but it’s not the kind of musical where the songs tell the story (Chicago) or get in the way of the story. In this film, the songs are an integral part of the story, provoking the emotional journeys of the characters, without in any way seeming forced.
The guy meets the girl when she approaches him on the street, because she likes his singing. They become friends, wander the streets of Dublin together, dragging her broken vacuum-cleaner behind them.
They stop off in a music shop and jam on the piano. They put a band together with another group of buskers and jam round at his place. They hire out a recording studio and lay down an album.
All the while, their backgrounds emerge through the songs and all of this colours the intimacy of their relationship.
Against the backdrop of the recording of an album, one of the most charming stories of unrequited love unfolds on the screen.

“How often do you find the right person?” asks the film’s tag-line, alluding to the title – which rather puts a dampener on the whole thing, when you reach the film’s inevitable conclusion.
But the almost surreal juxtaposition of these two unlikely friends jumps off the screen and feels more real than almost any relationship in recent movie history.
As the viewer, we are the guy – Hansard’s rather startled demeanour carries us on this journey of discovery – lifting ourselves outside our own boring lives and tasting something new, something exotic, something potentially dangerous – but perhaps letting ourselves fall too deeply for something we shouldn’t – the woman of his dreams can’t possibly give him what he needs and in the same way, the film can’t give us what we need.
It’s clear that we’re all going to be disappointed, but the journey is so delightfully charming that it’s worth the gain to reach the pain – it’s better to have loved and lost, and all that.
Both characters’ lives are enriched – and the performances of both leading actors will enrich the lives of all the viewers they touch.
The music too fits the mood of the film – and the feel of Dublin – perfectly. You’ll have difficulty getting one of the songs in particular out of your head for days after seeing it, and unlike other rather more contrived musicals that it might just about be cool to like, you won’t have to feel embarrassed about having the soundtrack to this film blaring out of your car windows.
Any failing in the acting, through the inexperience of the cast, only adds to the almost documentary nature of the way the tale is told.
This simple story of two warm and immensely likeable characters will appeal to all warm and immensely likeable characters.

It’s no coincidence that the music works so well. Glen Hansard is the lead singer of the Irish band The Frames. The film’s director John Carney used to play bass in the band and has directed some of their videos. The musical chemistry has provenance – Hansard and Irglová have previously recorded an album together.