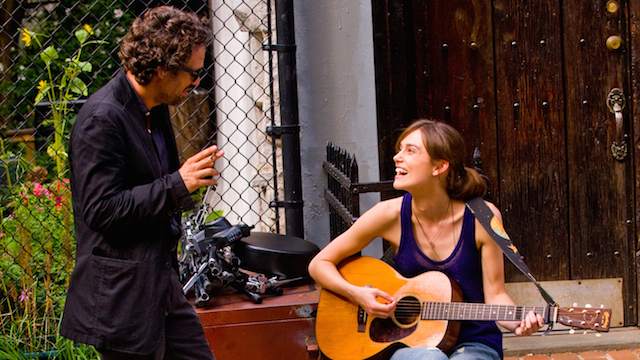 New York music producer Dan (Mark Ruffalo) is going through a rough patch. His wife Miriam (Catherine Keener) has kicked him out, he’s not seeing much of his teenaged daughter Violet (Hailee Steinfeld), he’s just been kicked out of the record company he co-founded, he’s living in a tiny studio apartment and finding solace in alcohol.

One night, while drowning his sorrows in a bar, his ears prick up when he hears a young British singer, Greta (Keira Knightley), who’s been bullied into performing her new song by her fellow Brit, busker Steve (James Corden).

She gives up, having been drowned out by the chatter from an uninterested crowd, but Dan thinks she could be the new sound he needs to restore his fortunes.

When he tries to persuade his former business partner Saul (Yasiin Bey, better known as Mos Def) to fund a demo-tape, he gets short shrift.

Greta has her own sob-story; she came to New York with her singer-songwriter-collaborator boyfriend Dave (Adam Levine), but when his career starts taking off, he begins to leave her behind, both creatively and romantically.

Alone in New York, Greta agrees to go with Dan’s suggestion that she can record a full demo album without any financial backing, by playing on the streets of Manhattan.

Can the pair use their music to rebuild their lives and brighten up their futures?

Director John Carney came to public attention with the delightful, heart-warming and uplifting Once and he’s clearly trying to recreate its musical magic here, with just a couple of tweaks – moving from Dublin to New York and using recognised talent – both in terms of actors (Mark Ruffalo and Keira Knightley) and musicians (Mos Def and Maroon 5’s Adam Levine).

But in so doing, despite delivering another charming piece of entertainment, beneath the surface, it’s a cynical box-ticking exercise. It’s bursting at the seams with stereotypes – an alcoholic having one last go at getting his life back on track, both professionally and personally – an underdog girl trying to prove herself after being dumped by her more successful boyfriend – her comedy best friend – her selfish popster ex who’s happy to leave the love of his life behind when stardom beckons, and then wants her back when things don’t go quite to plan, the ex-wife with attitude, the bratty daughter – and so on.

While the songs in Once washed satisfyingly over your head, Begin Again is often trying to be too clever for its own good, and in parts will be fully understood only by viewers well versed in the theory of music and certainly by people who listen carefully to the words of songs – which, in my experience, means many men will miss out on certain nuances.

As well as the central storyline of the attempt to find redemption through music, by recording a cracking album, against the odds, the cynical box-ticking comes in as the script tries to explore the personal lives of the key characters – without question, there are certainly some very touching moments, where attempts to tug at the heart strings work like a treat and will have all but the hardest of viewers in floods of tears, but overall, the film is somewhat cloying, teasing us with the prospect of a relationship blossoming between Ruffalo and Knightley – because that’s convention for such films – before taking us on an even more emotionally unsatisfying journey than those traveled by its protagonists.

Mark Ruffalo is on typically lovable form and once she gets over her initial whining, Keira Knightley just about manages to match his intensity, but too many of the other characters – effective as they are – feel like they came from central casting.

Once picked up the Oscar for the best original song for Falling Slowly, a haunting melody that rung around your head for weeks after hearing it, but while Carney is undoubtedly hoping to be in the running again next year, there’s no such killer song here. The music is all pleasant enough, but the closest you get to a hit is quite a catchy ditty that forms a key plot point; we’re told that the version that is likely to be in contention for awards is shallow and commercial, rather than the meaningful and gritty arrangement originally written – in that sense, a film that’s presenting itself as musically authentic is really promoting a lack of integrity.

It’s as charming, heart-warming and superficially enjoyable as it is shallow, vacuous and latently cynical.