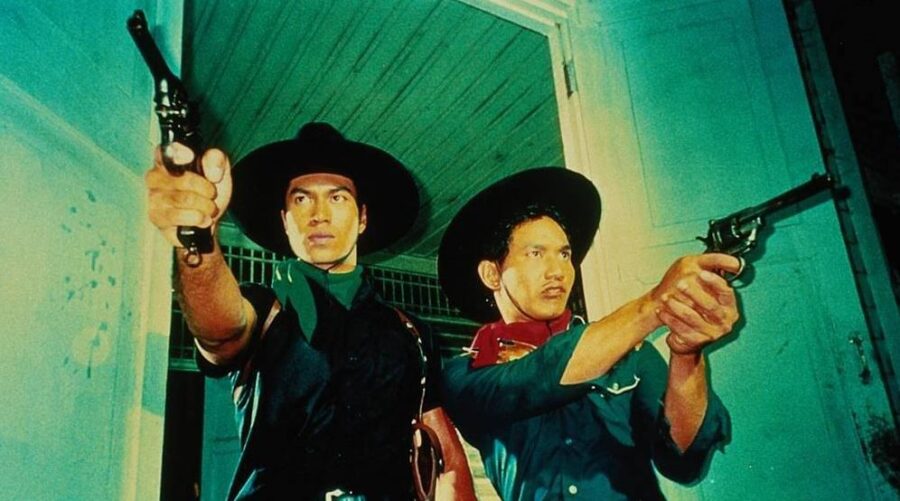 The first thing to strike you about this film is the colours – a peculiar array of bright pinks and dull greens. The second is the music – a mélange of western sounds, familiar classics and traditional Thai songs harking back to the 1950s. These two themes stick with the film, giving it a somewhat surreal feel throughout.

The story centres on a pair of star-crossed lovers – an aristocrat’s daughter Rumpoey (Stella Malucchi) and a peasant boy Dum – who first meet as children when a nobleman’s family heads to the countryside to escape Bangkok during the Second World War. When Rumpoey and Dum meet again ten years later, they fall in love and decide to marry, but fate soon turns against them.

A deliberately laboured plot is offset by some fascinating action sequences, including gun-fights which would make Tarantino jealous.

Laced with graphic, stylised, cartoon violence – such as close-ups of speeding bullets as they puncture the skin, sending chunks of flesh flying through the air in slow motion – the film sits uncomfortably somewhere between a visual feast and an assault on the eyes.

Although it harks back stylistically to Thai films that most Thais have never even seen, this tackles internationally recognised themes, including forbidden love, honour, and betrayal. Give these a spicy Thai twist and you create enough curiosity to entice the more adventurous cinema-goer.

In Thai with English subtitles.

A version of this review was previously published on the bbc.co.uk/films website