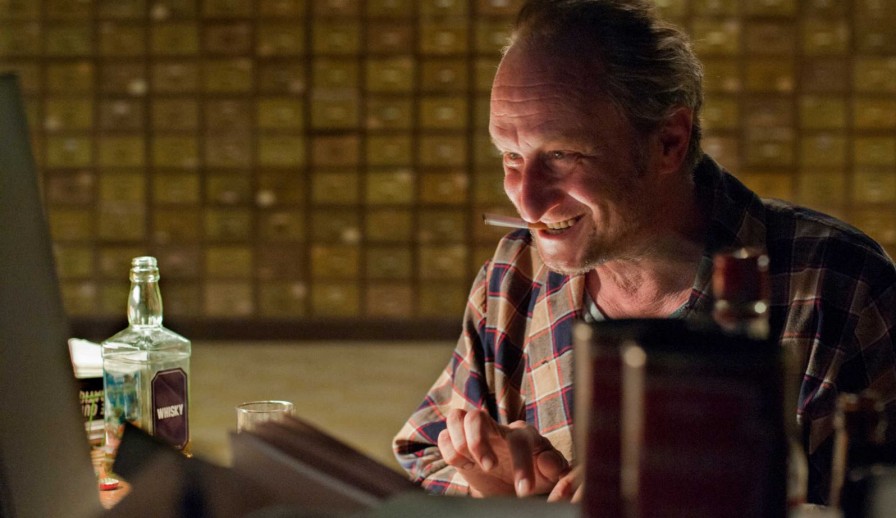 God (Benoît Poelvoorde) is alive and well and living in Belgium – specifically in a run-down flat in an unspectacular tower block in an unnamed city. His son Jesus has long since left home, leaving his daughter Ea (Pili Groyne) to deal with her father’s egomania – with little help from his meek and mild wife.

One day, after Ea sneaks into his office and sees, from his computer, that he enjoys causing distress to unsuspecting people on the street, she decides that it’s time to run away and find some disciples for herself – but not before creating a bit of chaos of her own.

To fulfill her mother’s prophecy that there should be a total of eighteen, Ea escapes from the flat and sets out to find six disciples, randomly chosen from God’s filing cabinets.

Having found a homeless man (Marco Lorenzini) to record her odyssey, by writing down her “brand new testament” (keep up!), she seeks a one-armed woman (Laura Verlinden), a sniper (François Damiens), a lonely sex maniac (Serge Larivière), a generally depressed businessman (Didier De Neck), the neglected wife of a wealthy globe-trotting businessman (Catherine Deneuve) and a young boy (Romain Gelin) who decides that he wants to spend what time he has left of his life as a girl.

But when God realises what Ea has done, he sets off to stop his errant daughter in her tracks and bring her home. But he discovers that outside his comfort zone, he doesn’t wield the powers he’s used to and his daughter does her best to maintain the upper hand.

Some plots are easy to summarise, others are a bit more complex and others are so surreal that attempting to outline them at all almost seems like an exercise as futile as trying to explain religion to a gorilla.

As you can probably imagine, The Brand New Testament fits very much into the latter category. But this is not a film about plot.

Jaco Van Dormael had delivered that rarity – a film that feels thoroughly fresh and imaginative, with the cinematic whimsy of Amélie.

The Brand New Testament – like the older ones that will be familiar to many God-fearing cinema-goers – is an episodic tome, each one following a particular character as it shows us how they learn from their predicaments and develop as characters. In this sense, it’s a film about self-fulfilment.

But on another level, it works as a surprisingly warm and gentle religious satire, as we see “God” exercising his powers and losing his temper when the tables are turned by the Daughter of God – who in turn, takes her advice from her better-known brother. If Ea had been the Messiah, rather more people might have felt inclined to follow organised religion.

Some of the episodes are less engaging than others and from time to time, Van Dormael pushes the conceit a little too far, coming across as being just a bit too arch for comfort, but it never quite detracts from the overall good-natured fun-poking, lesson learning and gentle enjoyment.