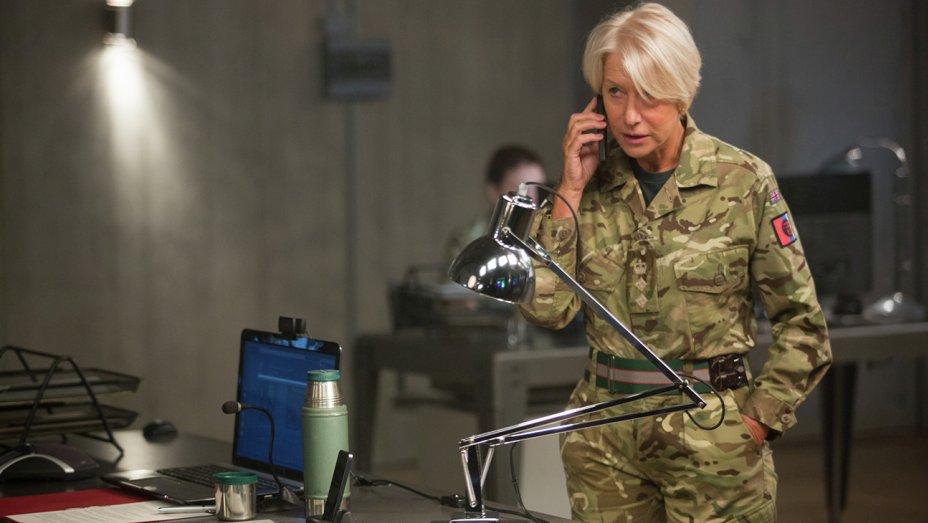 Colonel Powell (Helen Mirren), from British military intelligence, has been hunting a cell of Al Shabaab terrorists for years and has finally tracked them to a safe-house in a tiny village in Kenya.

American air force officers Steve Watts (Aaron Paul) and Carrie Gershon (Phoebe Fox) are the on-duty drone pilots at the Nevada air base, who are tasked with dropping a bomb on the target.

Local spy Jama Farah (Barkhad Abdi) is the man on the ground, flying a mini remote-controlled camera around the safe-house, providing up-to-the minute intelligence about what’s going on inside.

As the operation kicks into action, Lieutenant General Frank Benson (Alan Rickman) is called away from an important mission of his own – buying a doll for his grand-daughter – to chair a meeting of senior politicians and advisers, to ensure that everything goes to plan – and sticks to the rules.

When Colonel Powell realises that she has tracked even more targets than she’d thought and Farah discovers what they’re about to do, the impulse to strike immediately is almost too strong to resist.

But a young girl has set up a stall, selling bread, within the blast zone of any drone strike. Collateral damage is one thing, but dropping a bomb, knowing that an innocent child would almost certainly be killed is something else entirely.

But as the final decision is passed from military officials to lawyers and up the political chain of command, on both sides of the Atlantic, Colonel Powell sees her chance of neutralising her targets – and potentially saving dozens of lives in the process – slipping away.

South African director Gavin Hood presents his characters with a not uninteresting dilemma – is it worth risking one life to save many others? It’s oddly similar to the question he asked in his 2007 “War on Terror” thriller Rendition, which wondered whether it was acceptable to torture someone if it could save many lives. In both films, interestingly, it’s a powerful woman who’s certain in herself that it is worth giving up a bit of moral high ground in order to protect the innocent, while doubts are raised by others, lower in the chain of command. In many senses, it also feels like we’re revisiting the recent Good Kill, in which Ethan Hawke’s remote drone pilot started to question the morality of killing enemies in a different country, as if they were characters in a first-person-shooter video game.

In Eye in the Sky, Hood keeps the tension high by playing the film in real-time, rather than getting bogged down in the fractured timeline that mired Rendition. It’s particularly revealing, adding additional dimensions to Good Kill, to see the complexity of what you might expect to be a simple situation – with varied teams working together, from the British Colonel’s military command, to the American drone pilots, the politicians and the east African spies on the ground. The audience will share the frustration of most of those on the screen, as the events constantly change, keeping the protagonists on their feet.

But as with Hood’s earlier film, while all the necessary arguments are entertained, there will be viewers who start on a particular side of the argument and will be unlikely to have their opinions changed. However, for what it sets out to do, this film succeeds in taking the audience on a gripping ride, ratcheting up the tension keeping you on your toes until the last minute. A number of the character traits are disappointingly text-book while many of the twists and turns and attempts at humour seem a little arch, but much of this can be forgiven as the team are clearly trying to draw a mainstream audience to a rather intellectual subject matter, or at least the necessarily verbose side of warfare.

While many of the themes and much of the action seems familiar, it makes a change to see Al Shabaab in the firing line, reminding audiences, more familiar with following America’s exploits in Iraq and Afghanistan or watching the current conflicts in Syria and Iraq on the news, that the threats don’t come only from the Middle East.

In a small but pivotal role, the late Alan Rickman’s character’s no-nonsense approach and sharp wit make this a fitting final performance for the acclaimed actor, whose death came early enough for a tribute to feature in the closing credits.