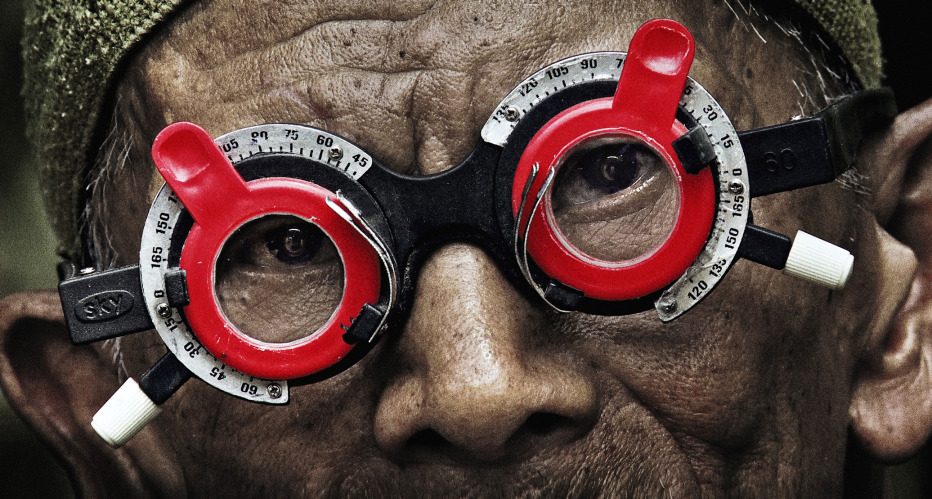 Two years after his Oscar-nominated and BAFTA-winning documentary The Act of Killing, director Joshua Oppenheimer returns to the subject matter of the violent aftermath of the failed 1960s coup that brought the military-backed President Suharto to power.

In its efforts to eliminate any threats to its power base, the regime blamed the uprising on communists and proceeded to murder hundreds of thousands of people it branded as such; but rather than being active participants in the failed coup d’etat, many of the victims were simply intellectuals, liberals and other opponents of the government that retained a tight hold on office for more than thirty years.

In this film, Oppenheimer homes in on the personal story of one family, who lost a son to the death squads. The victim’s younger brother – an opthalmologist – visits many of those involve in the killing, ostensibly to give them an eye test, but while so doing, grilling them with questions about why they killed his brother.

Without having seen The Act of Killing, an ignorance of much of the background to Indonesia’s political crisis of fifty years ago will not make this film any less powerful, but it will lack context and leaves the viewer relying on one side of the story, dehumanising those involved. There was an attempted military coup – those who came out on top understandably tried to firm up their position; most in the West might shudder at the way this was done – branding all their opponents communists and setting up a network of death squads to kill them – but five decades ago, many other nations, including Western democracies, employed military tactics that would now seem questionable.

Hearing the killers describe how they drunk the blood of their victims to prevent them going crazy suggests that these men had been effectively brainwashed by a political and military elite, who were trying to keep their own hands clean. The brutally frank and unapologetic testimonies of death squad leaders, as they describe with enthusiasm how they pulled the intestines out of one victim or cut the penis off another, is shocking to us, at a distance of thousands of miles and several decades, so you can only imagine how hearing the stories – and the way in which they are told – must affect the man at the heart of this story.

He’s not after justice – with some of the perpetrators now dead, that’s not even a option – but he wants the killers and their leaders, many of whom still hold office, to confront their behaviour and every last one continues to defend their actions.

As the film-makers point out, the mass killings were carried out by locals, who continued to live near the families of their victims and to this day, opponents of that regime still fear the influence of their elderly oppressors.  Many still have to be careful about what they do and say in public, to the extent that most of the Indonesians involved in the making of this documentary – even the opthalmogist at its heart – remain anonymous.

But horrific as the stories are and powerful as the drama is, as the young man learns about the death of his brother, the structure feels arch – an opthalmogist asking probing questions during eye tests or watching old footage, both from the 1960s and more recent interviews, carried out by Joshua Oppenheimer himself, in preparation for his previous film.

Concentrating on a single victim out of an estimated one million, this particular film fails to convey the scale of the brutality of the regime and begins to feel disappointingly parochial – not least when we see the elderly mother of the victim bathing an even older, decrepit father, who can’t remember what happened 5 seconds ago, let alone 5 decades ago.

The film also fails to address the bigger picture with regards to how the country is run now; it suggests that those who slaughtered their rivals remained in power, but the most recent presidents have come to power in democratic elections. And hearing the killers protesting that “Joshua didn’t ask us such deep questions,” referring back to the director’s previous visit to the area, almost makes you feel that this film is an ambush, targeting the foot-soldiers, rather than the decision-makers who reigned down blood on their political opponents, under the guise of what they described as the New Order.

So, powerful and chilling as it is, part two of Joshua Oppenheimer’s examination of the Indonesian killings feels incomplete and not as revealing as it should.