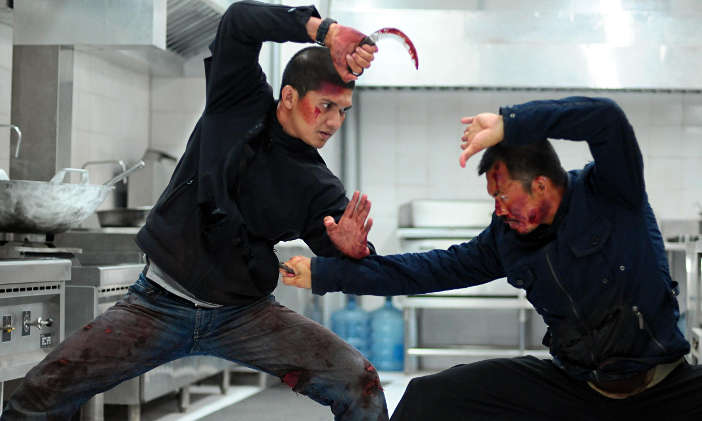 Just two hours after the first raid ends Rama, (Iko Uwais) who was on the S.W.A.T team that became trapped in a tenement run by a ruthless gangster and his band of killer thugs and emerged the sole survivor, goes undercover to infiltrate a ruthless Jakarta crime syndicate and uncover police corruption in his own force.

He is sent to jail for over two years in order to get close to Ucok (Arifin Putra) the son of the mob leader who is also serving time.

When Rama saves Ucok’s life feeling indebted to him Ucok befriends him and welcomes him into his world.

Interestingly Evans wrote this film before The Raid but after failing to obtain the budget after two years he opted for plan b which was to do the first Raid and the rest as they say is history.

The beauty of it is you don’t need to have seen the original to enjoy or understand this sequel which refreshingly bears no resemblance to the first film and which is filled with wonderfully colourful characters which were very Tarantinoesque. The most interesting and visually thrilling were Hammer Girl, (Estelle) whose weapon of choice were two claw hammers, and Baseball Bat Man, (Yulisman) who annihilated his victims by smashing a baseball in their heads. It is simple but very effective.

The Welsh director clearly has an eye and a passion for martial arts as the set fight scenes are beautifully and exquisitely drawn and have a dance like and almost musical quality about them. Although they each surpass the other in their brutality and their innovative killings.

They are however relentless and feel overly long with the final one set in an enormous kitchen lasting almost six and a half minutes. But after watching Rama battle his way out of a packed prison toilet, a wet and muddy jail courtyard brawl, a nightclub and then a thrilling car chase by the time we reached the kitchen finale I found myself pummelled into submission.

At times it felt like a series of kick-ass action scenes just joined by a thinly veiled plot but if you are male and over eighteen then you will be in martial arts heaven.

The good news for you is that according to Evans there will be a Raid 3.