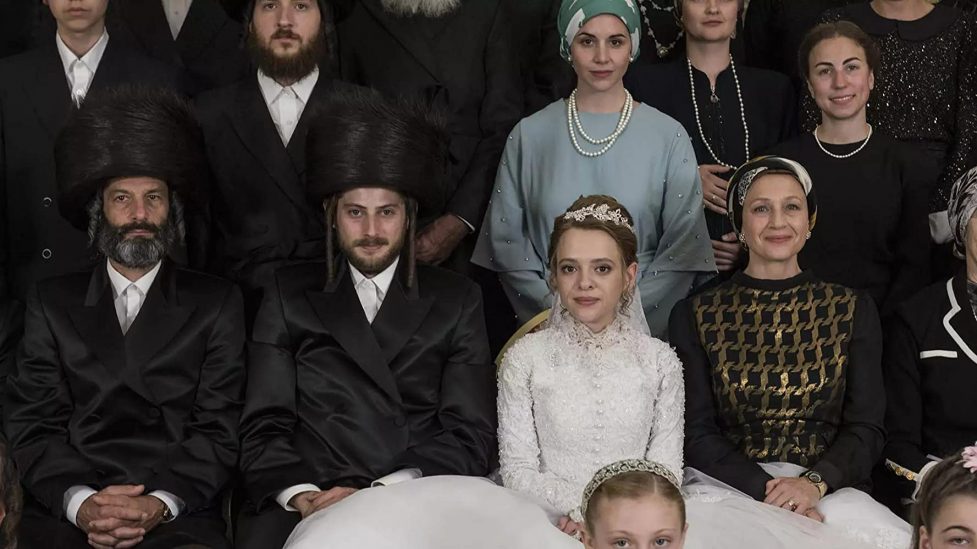 In New York’s Yiddish-speaking Hasidic community, teenager Esty (Shira Haas) is a year into her arranged marriage. Her husband Yanky (Amit Rahav) is growing increasingly frustrated that she hasn’t had a baby yet. His overbearing mother is making her own displeasure clear.

Feeling constantly stressed, oppressed, belittled and objectified, Esty reaches breaking point and decides to leave the marriage, but in this kind of community, you can’t just walk away; she plots an intricate escape, which takes her to Berlin – the hometown of her mother (Alex Reid), who fled the group herself, some years earlier.

When the rabbi finds out that Esty has run away, he sends Yanky, and the community’s enforcer Moishe (Jeff Wilbusch), to Germany to bring her back.

Unorthodox is based on the memoir of the same name by Deborah Feldman, who also escaped from her oppressive life within the Satmar community of Williamsburg in Brooklyn and set up a new life in Berlin. But from this point, this four-part series digresses from her real story.

Feldman did indeed grow increasingly uncomfortable in the reclusive world of ultra-orthodox Judaism and she did indeed flee to Berlin, but in reality, it was the arrival of a child that persuaded her to leave, while this series portrays her as a woman whose apparent inability to conceive is just one of the causes of the mutual frustration the builds up between her and those around her. But once her mind is made up, nothing is going to stop this determined young woman trying to build herself a better life.

On arrival in Berlin, Esty – rather than Feldman – makes some slightly odd decisions, leading to her becoming surprisingly close, surprisingly quickly to a group of music students. There’s a whole side-story about how she’s trying to get into a music school without being qualified, which seems to take viewers away from the story at its heart – perhaps they didn’t need four hour-long episodes to tell this story.

The narrative paints a very clear distinction between the ruthless family at home and the warm and welcoming friends in secular society. The picture painted of the Yiddish-speaking, modestly dressed community is not a positive one and seeing the elders dispatch people half way around the world to hunt down fugitives could prompt viewers who don’t know many Jewish people to think the religion more generally is a cult that behaves not unlike a cross between scientologists and the Amish.

Although one brief scene – of a traditional Passover seder meal – does offer a fascinating insight into why the Satmar community essentially shuts itself off from the world around it; the rabbi observes that every time Jews have assimilated into the societies they have made their home, they end up being persecuted – Nazi Germany being one of the clearest examples – and the loss of so many Jews during the Holocaust is also presented as the reason that ultra-orthodox families generally have large numbers of children – to rebuild the Jewish community destroyed by the Nazis. Suddenly, the driving force for keeping the community intact is easier to understand.

There’s also a peculiar contradiction in the way the wig-wearing women are presented. This presentation of ultra-orthodox Judaism counter-intuitively portrays women as weak and submissive – in the case of young wives such as Esty – while also being dominant and domineering, as exemplified by her mother-in-law and grandmother.

It’s a peculiar blend of based-on-real-life social commentary in New York and fictional fish-out-of-water action thriller in Berlin, as we flash backwards and forwards between the humiliation of life for a young woman in the Hasidic community and the hope offered for her future. The life she’s running from always seems more convincing than the world she’s running to – and the intersection, while tense, feels peculiarly anti-climactic, but the inevitable denouement is a powerful and passionate piece of drama.

Netflix have also made a “behind the scenes” short documentary available, with interviews with some of the actors and key crew. It provides some interesting asides and background information and adds some perspective and context to some of what you’ve seen.

It’s an enlightening watch and worth investing an extra 20 minutes in if you’ve already committed to the full mini-series.

But it doesn’t really work as a documentary in its own right, as it plays more like what’s known in the broadcast media as an “electronic press kit” – a string of interviews without any sense of structure or narrative.