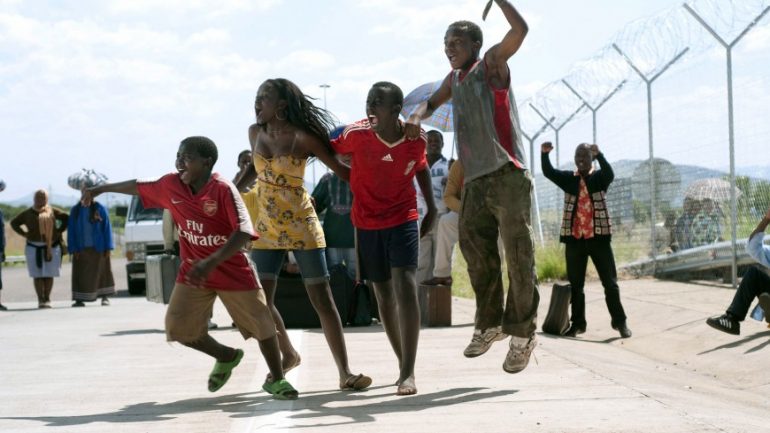 Lanky Rwandan teenager Fabrice (Roger Nsengiyumva) lives for football. When the opportunity arises for him to try out to become his country’s representative in an all-African youth football team to play at the opening ceremony of the World Cup in South Africa, his wiseguy best friend – and self-proclaimed manager Dudu (Eriya Ndayambaje) – promises to get him to the trials in the capital Kinshasa.

But middle-class Fabrice and his slumdog mate come from different sides of the tracks and Dudu is determined to cut corners and save money all the way. The result is that while the pair, with Dudu’s sister in tow, do find themselves on the way to the capital, it turns out to be the wrong capital.

Having missed the trial in Rwanda, Dudu pledges to lead his friend all the way to Soccer City to make sure he can achieve his dream of being part of the greatest event in the world, in this deep but comic fairytale.

On the insanely naïvely optimistic trek, thousands of miles through seven countries, the group picks up a former child soldier and a young girl who’s escaped a life of enforced prostitution on the way. And there’s an apt subplot about HIV testing too, all of which makes it sound like an incredibly worthy piece of preaching – but this is actually a delightfully warm and uplifting tale of friendship, loyalty and seeking your destiny.

The actors – some professional, some first-timers – some from Rwanda and east Africa, some from England bearing remarkably convincing accents – gel beautifully into an unlikely team to lead the viewers across a continent that is usually seen through the prism of violence and poverty.

But British director Debs Gardner-Paterson delivers, instead, a positive African story that will give the continent, if not the whole world, a sense of hope that through dedication, you can claw your way closer to your ambitions.

The humour is tempered by some scenes of menacing violence that initially feel a little incongruous, but they help to paint a picture of the conflicting parts of African society.

And one of the more original elements, which makes the film more than just a linear road movie, is the fact that it’s framed in a fairytale told by Dudu as he leads the team through Africa – his story being animated using dolls and objects collected by the crew during their time in Rwanda.