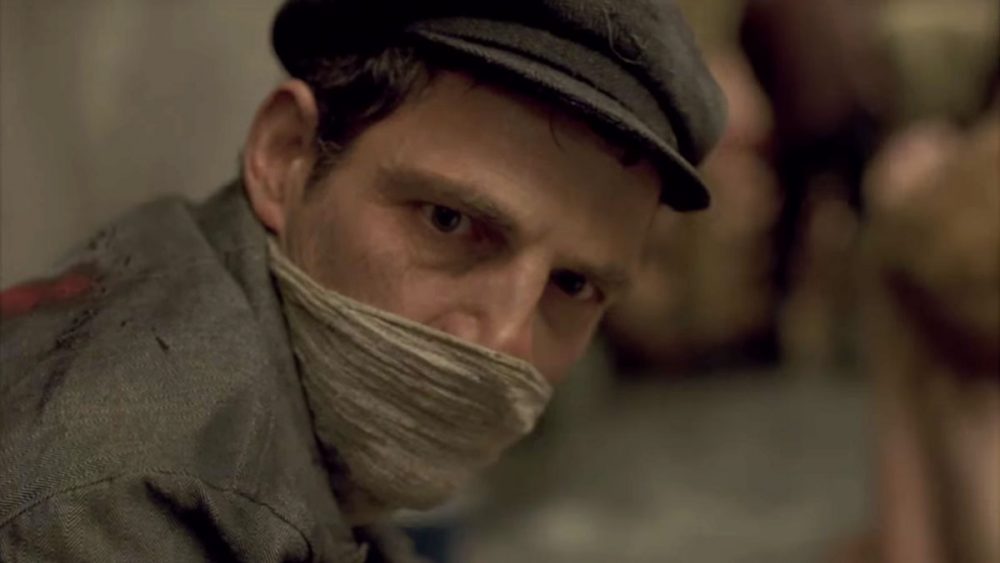 Saul Ausländer (Géza Röhrig) is a Hungarian Jew at Auschwitz, chosen by the Nazis to be a member of the Sonderkommando; under threat of death, he and his comrades have to herd gas chamber victims to their deaths and dispose of the bodies.

If any of them step out of line, certain execution awaits them, but when Saul sees his own son among the bodies after one massacre, he’s determined to give him a proper burial.

When the rabbi in his own unit refuses to do anything more than say a prayer for the boy, Saul sets out to find another rabbi in the camp who will help him provide a traditional burial.

But by the time he is able to put his plan into action, the Nazis have decided it is time for a new team of Sonderkommandos, so his comrades are more interested in preventing their own burials than helping Saul with his son’s.

László Nemes has picked up a slew of awards – from Cannes to the Oscar and Golden Globe – for his harrowing portrayal of a side of the Holocaust that is rarely reported but every bit as shocking as anything else we see.

The Sonderkommandos are helping the Nazis exterminated their  brethren, but they’re not collaborators – and their own murders are only delayed, not prevented by the horrifying work they are forced to carry out – from escorting gas chamber victims into the changing rooms to collecting their clothes to the sound of screams behind the metal doors, before disposing of the bodies.

The camera is almost always on Saul’s head – sometimes his face, sometimes the back of his head – almost always on the move, following him around as he carries out his morbid duties and tries to carry out what he sees as his moral duty. And almost never out of a mid-close-up, we see what he sees, hear what he hears, smell what he smells and share his chilling experiences, every step of the way.

With his chiseled features, Géza Röhrig has the intensity of a Hungarian Clive Owen as he goes with the flow, trying to do what he can while he does what he must.

Son of Saul is an eye-opening and educational experience, harrowing to its core – it’s only weakness being the credibility of conceit at its heart, that a man in his position would find his son’s body and then put his own life – and those of his comrades – at risk to give him a proper Jewish burial. But this almost futile determination itself is an admirable sign of the spirit that could not be crushed, even if the bodies could.