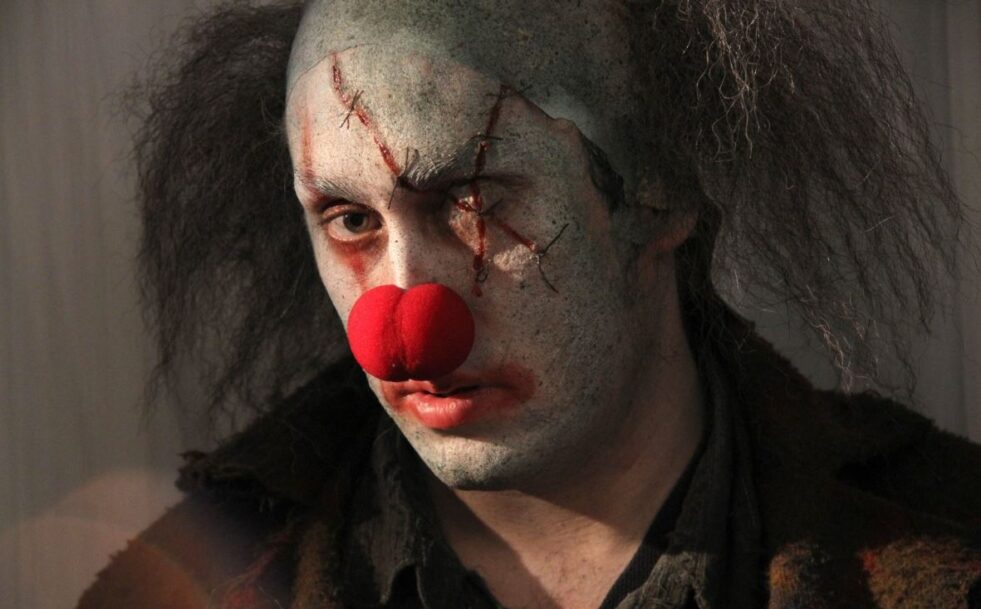 Stitches (Ross Noble) is one of those cantankerous clowns who hates his job, particularly when it involves entertaining kids.

Annoyed at having to leave some random woman, scantily clad in his caravan, to help young Tom celebrate his birthday, Stitches sports even more of a clown frown than normal as he tries to blow up balloons and squirt water out of a plastic flower, with a gang of obnoxious children throwing insults – and any objects they can find – at him.

One step back, to avoid the missiles, and he trips – skewering himself on a knife in the open dish-washer. No-one can survive a blade through the brain. Not even Stitches the clown.

Several years later, the teenaged Tom (Tommy Knight) is celebrating another birthday and finds his house hosting a rather bigger party than he’d planned, in his mother’s absence. Not his idea, of course.

As the party reaches full swing, an unexpected guest turns up: an even more bedraggled than normal Stitches has returned from the cemetery to wreak his revenge on the youngsters who, all those years earlier, had taunted him to a premature grave.

This is the typical low-budget film – a small core of characters in a single location. The film’s only true asset, Ross Noble, doesn’t get the chance to do what he does best .

At its heart, it’s a revenge story – but narratively, it’s conflicted, as the audience would rather be on the side of the person who’s seeking revenge, but in this case, while the teenagers were undoubtedly irritating brats as children, most of them are certainly not that evil that they warrant the brutal fates that await them. Equally, they’re not so appealing in their young adulthood that we particularly care whether they make it or not.

From the story-telling to the delivery, Stitches is amateur and obvious . It follows every beat of the typical comedy slasher film, right down to the magical back-story and the coda that sets up a possible sequel.

Some of the deaths are entertainingly and imaginatively gruesome in their blood-letting, but it takes more than a few set-pieces to make an effective genre film.

To its credit, it doesn’t take itself at all seriously and it’s clearly doing its best to hit the mark, but it’s just not scary enough and it’s certainly not funny enough .

Releasing it on Halloween weekend probably seemed like a good idea – until they realised that they were coming out on the same weekend as Skyfall.