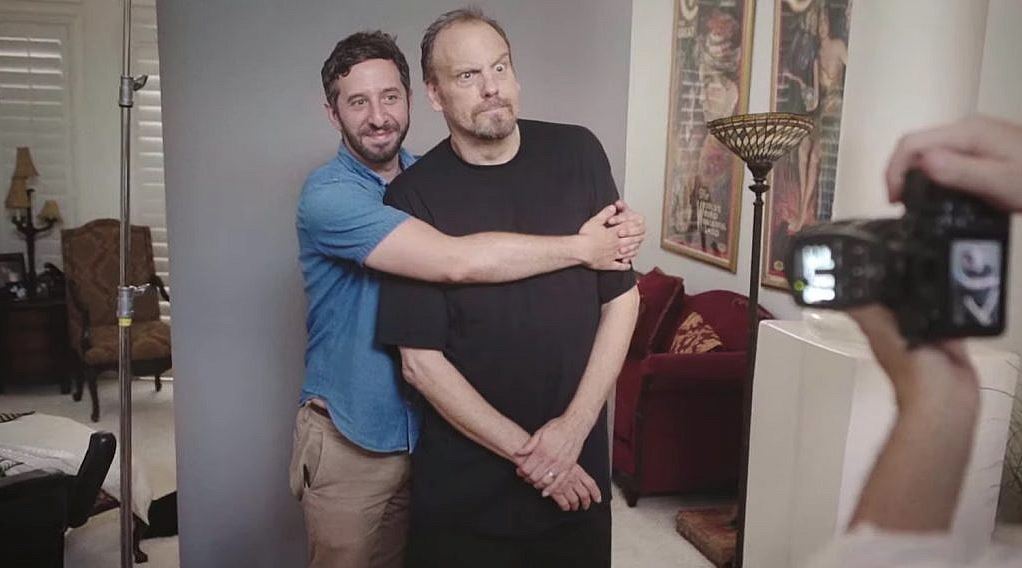 Viewers of late-night TV in the late 20th century – and fans of offbeat entertainers – will be aware of the anarchic comedy magic of The Amazing Johnathan – a kind of Tommy Cooper on speed – literally, as it turns out.

There was much shouting, running around the stage – and much blood letting, whether it was skewers through his tongue, playing with his eyeball or hacking through his arm with a butcher’s knife.

Back in 2014, soon after retiring from magic after more than a decade headlining shows in Las Vegas, Johnathan was diagnosed with a terminal heart condition and given one year to live.

Film-maker Ben Berman approaches Johnathan to make a documentary about him but after a year of following him around, Ben is told that a second crew is making a separate film about him.

When he discovers that they’re not alone, Ben starts to doubt everything Johnathan has ever told him and questions whether he should continue making the film.

OK, so this is not a spoiler. Ben continues making the film, or I wouldn’t be reviewing it.

But other than saying that, it’s quite a tough one. It’s been said that the less you know about this before going in, the better, but the problem is that most people don’t get a chance to see many films and if they’re going to invest time and money in going to the cinema, they want to know what they’re going to see.

As a sub-genre of documentary films, it’s not unusual for directors to set out to make one film and find that the subject matter ends up taking them somewhere else entirely.

Learning that there are other crews also making films about your subject could certainly prove to be a source of such unpredictability.

Ben considers everything from how he can make his film stand out from the others to whether it’s even worth putting more time into a project when his subject seems to be more interested in working with others.

One problem with this is that anyone who remembers The Amazing Johnathan from late night TV would find the prospect of catching up with him quite enticing – and his medical diagnosis emotionally distressing. But as this documentary starts to take another direction, it becomes a different film entirely – still intriguing in its own way, certainly, but quite possibly not the film fans set out to watch.

It becomes clear that for people who actually want to know about The Amazing Johnathan, they might be better off trying to find one of the rival films, because this one provides only a small window into the enigma of this trickster. We see little of his stage show, the magic and comedy, the blood-letting anarchy, the shouty, boundless energy. We do get to see an off-stage persona that’s not particularly surprising for an erstwhile entertainer – a self-important show-off who’s clearly missing the limelight and the sense of worth that it gives him.

With the help of talking heads – including fellow comics and magicians – Ben Berman tries to tease out more about the man at the heart of his work, but ultimately, it becomes more of a film about Ben than about Johnathan.

Are there audiences crying out to watch a film about Ben Berman trying to make a documentary? Or more to the point, will audiences who go to the cinema to learn about The Amazing Johnathan, for a nostalgic magic and comedy trip, want to spend an hour and a half with a documentarian they’ve never heard of, trying to film an increasingly uncooperative subject.

It often feels more like a film about how to avoid the pitfalls of documentary-making than about a profile of any particular character, whether Johnathan or Ben. You do get a sense that this film-maker is struggling to get what he needs, so rather than using his resourcefulness to get the best out of his subject, he just gives up, throws his toys out of the pram and shows everyone how much trouble he’s having trying to make the film and hopes they’ll be satisfied with that or at least feel sorry for him. And you do feel sorry for him, but you also feel that a film-maker with a little more control of his subject wouldn’t be having so much trouble.

It’s an interesting enough film, but ultimately, it’s targeted at entirely the wrong people. It’s almost as if Berman is asking fans of The Amazing Johnathan to root for him over the eponymous entertainer they’ve come to see – and hardly see.

If you invest your time and money to see a film about an enigmatic entertainer, you might be disappointed to get something different – but perhaps you shouldn’t be surprised.

At times, the film offers a fascinating insight into both the lives of a bored retiree and a frustrated documentary-maker but you can’t help wondering to what extent this enigma of a film is just another of The Amazing Johnathan’s tricks, with Berman as his stooge.