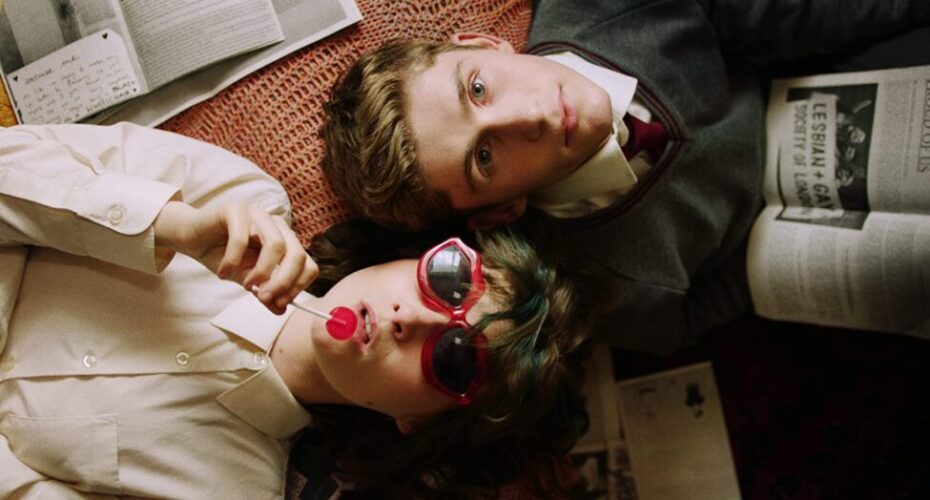 In 1995, in a small town outside Dublin, Eddie (Fionn O’Shea) and Amber (Lola Petticrew) are misfits in school. She has no friends and his are constantly teasing him – accusing him of being gay.

As it happens, they’re not wrong; he knows it but he’s not ready to admit it, to himself or anyone else, worried about how it would go down with the kids in his conservative Catholic school and his father, who’s encouraging him to follow him into the army.

Amber, too, is gay and is similarly not ready to tell the world. But she has a feeling about Eddie and suggests that they pretend to date, to stop everyone else gossiping.

The more time they spend together, the closer they become, but with their true feelings tearing them in other directions, there’s only so far they can go on this journey together.

Teenagers can find it hard enough to fit in, without having to worry about their sexuality, so in 1990s Ireland, you can see why it might just seem easier to pretend – to others and perhaps even to yourself too.

Fionn O’Shea, recently seen as a decidedly unpleasant love rival in the BBC drama Normal People, turns out to be a very likeable protagonist. With a supportive mother (Sharon Horgan), a traditional father (Barry Ward) and a cheeky younger brother, most of Eddie’s teenaged angst comes from his secret attraction to men.

Amber, on the other hand, has been struggling emotionally since the death of her father. She’s balances her school-life by helping her mother run a local caravan park – running a little side-business of her own.

With her fast-talking, flighty confidence hiding her own insecurities and his more introverted approach putting up barriers in all directions, the pair develop an unusual screen chemistry – fizzing on screen together as their friendship deepens, without – for obvious reasons – the sex getting in the way.

But this is a relationship with a sell-by date; they see each other both as “beards” – someone to stop others thinking they’re gay – and as someone who can help them blossom and find happiness in their true selves.

As they grow closer, though, one of them wonders whether they could actually make a go of it for real, turning the best-before date into more of a use-by.

With snappy humour, warm central performances and an authentic sense of the period and place, the plot zips along, delivering messages that will help many viewers struggling to work out what’s going on in their own lives.

But the narrative is, too often, propelled by cinematic shorthand, with too many of the characters behaving inconsistently or incoherently, in order to make the story unfold efficiently and some arch moments that don’t ring as true as the bulk of the film. Its 92 minute running time ensures a brisk watch but risks the story feeling a little compressed and leaving no time for some wider context which feels missing, glossed over or squeezed in with a line of exposition.

Given the subject matter, there was a risk that it could have felt a little preachy, but the storytelling is generally light, feel-good and mainstream, but that’s helped by an unrealistic – and narratively inconvenient – notion that in this 1990s Ireland, almost everyone seems to be completely comfortable with homosexuality anyway, which does detract a little from the drama.

Dating Amber is an entertaining and warm-hearted coming-of-age tale with much to say, but driven by a little too much coincidence and convenience.