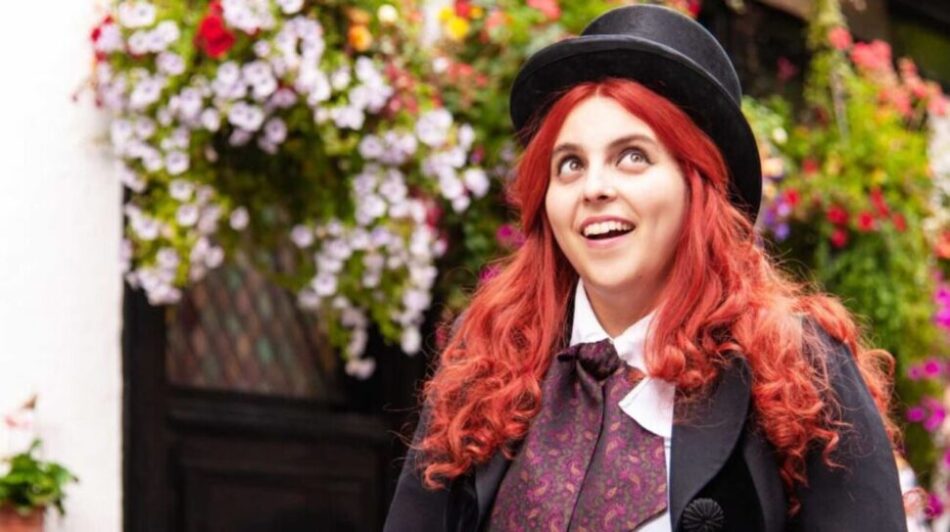 In early 1990s Wolverhampton, an introverted 16 year old, Johanna Morrigan (Beanie Feldstein), is desperate to escape her council-house life, making something of herself by showing the world that she can be cool, without compromising her ideals.

She sees writing as her route out and naively submits a review of the Annie musical soundtrack to a rock-magazine as a job application. Of course they reject her, but she manages to persuade them to give her a chance, when a gig comes up in the midlands that none of the staff can be bothered to travel to.

Johanna soon realises that no-one wants to read a hagiography and creates a new identity, the red-headed, top-hat-wearing Dolly Wilde, a wilder personality to deliver cutting reviews that take no prisoners.

Even a pop star she’s befriended (Alfie Allen) is ripped to shreds in an eviscerating article, when the magazine won’t publish her original draft.

But when she realises that her fellow rock journalists are still making fun of her, she sees the error of her ways, regrets what she’s written and sheepishly does her best to undo the hurt she’s done. But where will that leave her journalistic career?

Written by Caitlin Moran, based on her semi-autobiographical novel of the same name, How To Build A Girl is an entertaining enough coming-of-age story of a teenaged writer who’s as precocious as she is out of her depth.

It’s unusual casting, but Beanie Feldstein, best known for Booksmart, just about pulls off Moran’s alter ego – if not the Wolverhampton accent. She remains as likeable as she is obnoxious.

But the highlights of the film revolve around some of the supporting characters – it’s nice to see Paddy Considine in a rare comic role as Johanna’s father, with Chris O’Dowd, Bob Mortimer and Emma Thompson popping up in one-scene roles, while a whole host of familiar faces – including Gemma Arterton, Sharon Horgan, Michael Sheen and Alexei Sayle – turn up as Johanna’s literary heroes, offering advice from posters on her bedroom wall that come to life.

But the story feels like a coming-of-age by numbers – an outsider seeking to better herself, going against her principles, realising it’s not the best approach, trying to undo the harm she’s caused, finally finding herself – tick, tick, tick.

It doesn’t feel as rock-and-roll as you’d expect from a film about a music critic and it’s not as deep as this type of film should be. The story is condensed into too short a time for her to really learn that much about life.

It’s fun – but, to use musical terms, more flat than sharp.