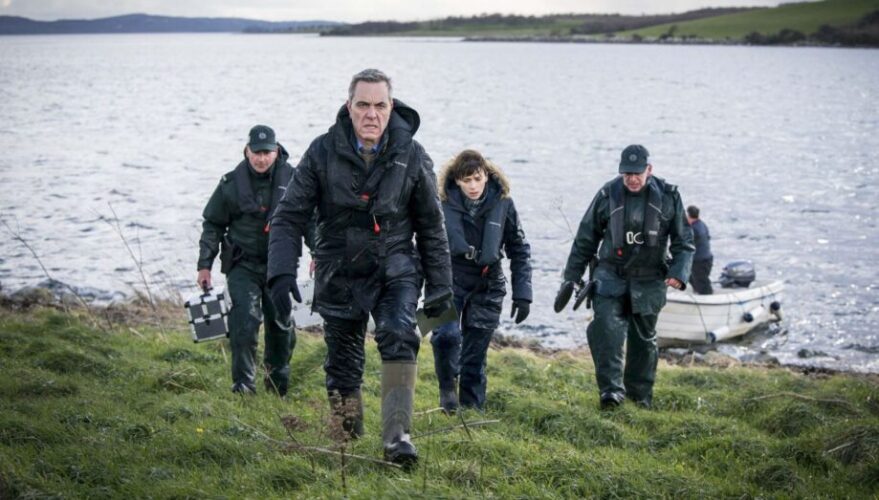 When a car, owned by a former IRA leader Pat Keenan (Peter Ballance) is pulled out of Strangford Lough, there’s no sign of the man himself.

The police are quick to link his disappearance to a two decade-old cold case, in which an assassin – nicknamed Goliath – killed an IRA commander, a Catholic priest, a loyalist paramilitary and an intelligence officer, Emma Brannick.

Her husband, Tom (James Nesbitt) is now the senior police officer tasked with finding Pat Keenan – and establishing whether the case is linked to the Goliath murders.

The local police chief DCS Twomey (Lorcan Granitch) is worried about opening up old wounds and would rather Keenan’s disappearance was investigated without reference to the cold case.

But as the list of suspects is narrowed down, ghosts of the past hang over the investigation and the closer the police come to unmasking the killer, the further he has to go to avoid capture.

This four-episode Northern Ireland-set drama starts off promisingly, with the disappearance of a former IRA man, echoes of killings from the Troubles and relatives of the victims working behind the scenes to find the almost mythical “Goliath,” who seems to have been forgotten by the authorities.

The narrative is immediately twisted, complex and political, with personal histories clouding every moment. A variety of suspects are immediately thrust into the air, with any one of them seeming as possible or probable as the next.

But two twists at the end of episode two turn everything on its head. One takes the narrative down an unexpected avenue, but the other propels it into a different show altogether.

Half way through the series is far too early to know “who dunnit” – not least because you don’t know the characters well enough to empathise with them once you know what they’ve done. Instead of being a “who dunnit” or even a “why did they dunnit,” it becomes more of a “will they get away with it” – which is fine, if that’s where the story started. And from the moment of the big reveal, the character in question spends the final two episodes scowling like a villain.

When you start to unpick the plot, less and less makes sense. From the outset, does it seem likely that a police officer whose wife was murdered by a serial killer twenty years earlier would lead the hunt for her killer? When the bodies of the victims of the cold case are found after a tip-off from someone who saw what was happening on an island, would the killer commit another crime in the same location, in full view of whoever saw the killing two decades earlier?

And then there’s a pair of medallions, both of which nudge the plot along in cliched or unlikely directions.

What presents itself as a gritty police procedural doesn’t stand up to scrutiny, once you start picking away at the surface.

It’s failings make it all the more odd that it’s been recommissioned for a second series; we’ve already spent two episodes watching a killer avoid capture – you have to wonder where they can take it from here, if they want us to continue to root for the survivors of season one.