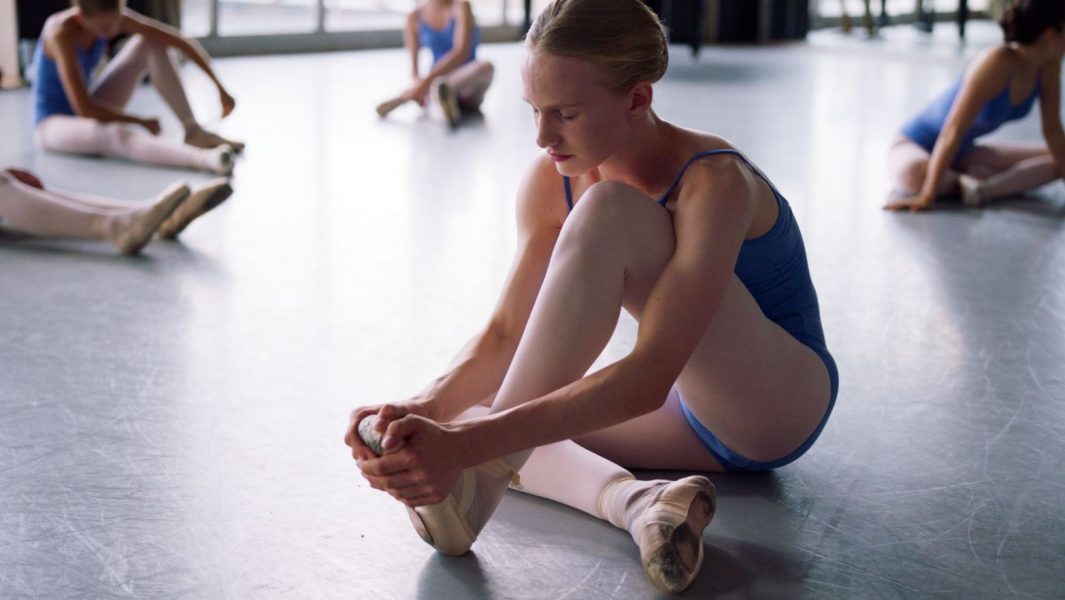 Lara (Victor Polster) is a fifteen year old ballet student who’s just moved to a new town with her father Mathias (Arieh Worthalter) and her younger brother, so that she can start at one of the top ballet schools in Belgium.

Lara was born with a boy’s body but is itching to proceed with the transition to become a girl, for which she’s under a constant stream of counselling sessions and doctor’s appointments.

At school, she’s struggling to reach the standard of dancing required to progress, as she battles to be accepted by the other girls.

At home, her Dad is constantly warning her that if she doesn’t obey the doctor’s instructions, her transition could be delayed.

But her frustration grows as pressures from school and home start to collide and her teenaged impatience threatens to undermine everything she’s fighting for.

This film is physically painful to watch.

As Lara pirouettes faster and faster, you feel that her toes could fall off at any moment – her determination to put herself through such physical pain to achieve her dream to become a ballerina, in the face of growing bullying from her contemporaries, is as admirable as it is foolish.

Most teenagers could not even begin to endure this level of stress, so putting it against the background of someone, uncomfortable in her body, edging closer to the moment when doctors can help her put it right, makes her life almost unbearable.

Anyone with the strength of character – or desperation and determination – to put themselves through even one – let alone both – of these challenges deserves, at the very least, our respect.

But for the viewer, a layer of frustration is added to the discomfort and pity as Lara begins to ignore the advice of her highly supportive father, doctor and counselor.

It’s perhaps an accurate depiction of the frustration someone might feel when they know where they want to be but the world seems to be conspiring to slow down their journey. But this is where most in the audience will support the maturity and experience of those around Lara and will implore her to take advice, as they share the exasperation of her supportive father.

This perspective might be part of what has prompted the not unexpected criticism from some in the transgender community, who have complained that Lara should have been played by a transgender actor – an oft-heard criticism from diversity campaigners, whether it’s about Dwayne Johnson playing a one-legged man in Skyscraper, Tilda Swinton playing an east-Asian mystic in Doctor Strange or the many examples of straight men playing gay characters.

But it is the job of the actor to get under the skin of a character and convincingly lead the viewers through the story and never for one moment do you doubt Victor Polster’s suffering and persistence as her physical and emotional pain explode into a crescendo that few could endure, in a visceral and powerful drama.

It’s Lara’s intemperance that challenges the audience’s support for her, rather than the casting choice – and it’s that which could cause more danger to people who are going through the same thing themselves and the wider community’s understanding of the difficulties they face.

Without wanting to spoil anything you probably won’t be able to see through your fingers anyway, rather than eliciting a feeling of hope, much of this film delivers a disappointingly nihilistic message, which might be closer to reality but makes for an increasingly uncomfortable experience for the viewer – although clearly nothing like as uncomfortable as the experience of its protagonist.